John Byrne often gets a lot of credit for defining the personality of She-Hulk, but in a couple interviews in Marvel Age #70 and 73 leading up to Sensational She-Hulk’s release, the writer/artist revealed his thoughts on the character. In these interviews, Byrne claimed that it was Roger Stern’s work on her in Avengers that got him interested and made him want to steal her for his Fantastic Four run. Additionally, Byrne described his vision for the first five issues was to replicate the old Silver Age stories of the 1960s. This included the first issue being at a circus, similar to Hulk’s introduction in Avengers #1. Issue #2 involved extraterrestrial Toad Men from Hulk #2, 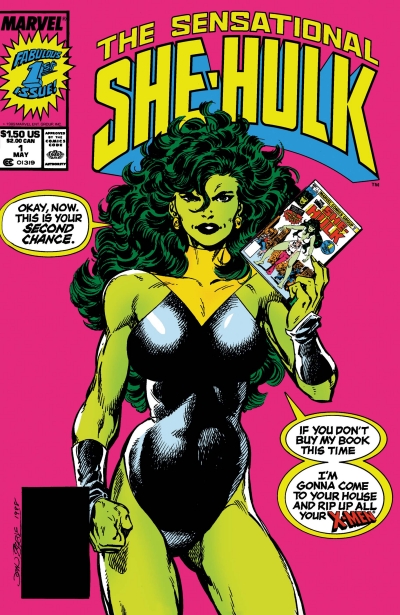 mirrored the Skrulls of Fantastic Four #2, the Space Phantom of Avengers #2, and involved a villain of deception as in Amazing Spider-man #2. Issue #3 had an obligatory guest appearance by Spider-Man. Issue #4 brought back a Golden Age hero in Blonde Phantom, similar to Captain America and the Sub-Mariner popping up in Avengers #4 and Fantastic Four #4 respectively. Finally, issue #5 introduced a “Doctor” villain in Doctor Bong, rather than Doctor Doom from Fantastic Four #5. Byrne emphasized that he wanted to use the “lame” villains but many of the characters he expressed interest in using, such as Black Talon and Mahkizmo, would not appear until his return to the title after issue #30.

The tone of the book was wildly different from other comics of the time in that it was largely humor-based, rather than the common, grim-dark Batman and Punisher characters that populated the comic racks. She-Hulk also officially began breaking the fourth wall, with the character talking directly to both the creators and the audience. Memorable cover gags and clever uses of the comic medium, such as She-Hulk tearing through the page of the comic to chase the villains across an ad, made the book a welcome change of pace for most readers. She-Hulk was single, confident and flirtatious throughout the series but reticent to have a long-term relationship. A new supporting cast member was introduced in Louise “Weezi” Mason, the former Blonde Phantom, and she became a close friend and business partner throughout the series, often breaking the fourth wall as well. John Byrne unfortunately ran into issues with Marvel editorial while concurrently working on Avengers West Coast and would leave the title after 8 issues. 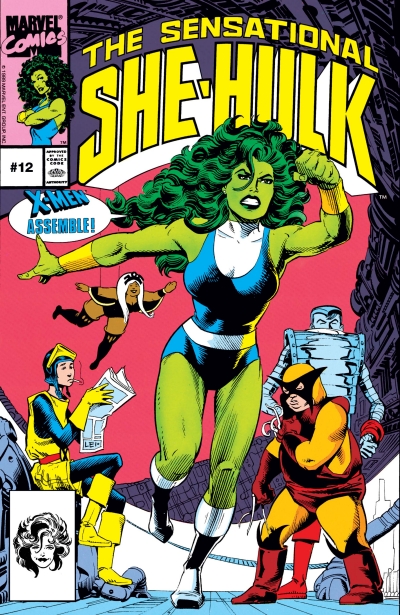 Steve Gerber replaced Byrne, and he was a logical choice to continue the humorous tone previously established. Gerber was no stranger to using “lame” villains in his previous Defenders and Howard the Duck books, with the Duck himself appearing in a four-issue story line alongside She-Hulk. However, Gerber did not continue the fourth wall breaks previously established, opting more for his trademark social satire. After 12 issues, he left the title to be followed by a rotating creative team that left the title somewhat directionless. Many people viewed this period as a lull before the return of John Byrne. This included John Byrne himself, who returned to the title with issue #31 and had in comic jokes about completely ignoring anything that happened after issue #8.

With Byrne’s return, he wrote and drew all but one issue until the book reached the milestone #50. The tone went right back to where Byrne left off, including fourth wall breaks and interesting uses of panel layouts. Many jokes utilizing She-Hulk’s 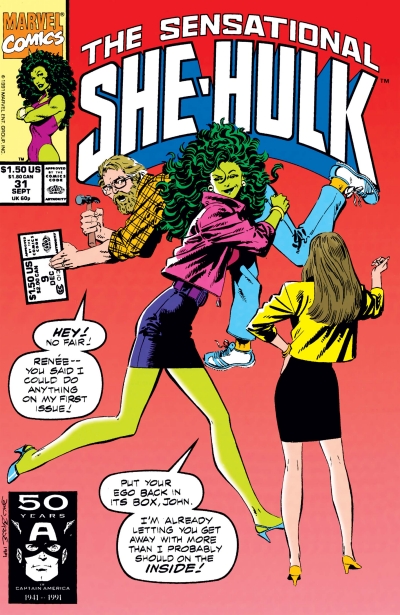 sex appeal littered the interior and the covers. A recurring trope was that She-Hulk would spend several pages talking directly to the reader about exposition or continuity, while making sexy poses to keep the audience interested. Direct mentions and interactions with Byrne himself or the book’s editor Renee would occur regularly. Many of the characters from the first eight issues returned for sequel stories, such as Xemnu, US1 and even characters from Byrne’s other Marvel series like the D’Bari (asparagus aliens). He introduced more “lame” villains, including ones he mentioned in previous interviews, such as Spragg the Living Hill, Makizmo and Black Talon. Weezi played an even bigger role, supporting She-Hulk, being de-aged, dating Jen’s father and even temporarily siphoning off She-Hulk’s powers and looks. Wyatt also came back into Jennifer’s life and a romance seemed to once again blossom. Throughout the run, Byrne really seemed to be stretching his artistic limits, going for big, detailed, page spreads. This culminated in issue #50 in which a meta story about replacing Byrne led to many different experimental tone and art style changes for a theoretical new direction for She-Hulk.

Following his departure, the book only lasted ten more issues, of which the only regular writer was 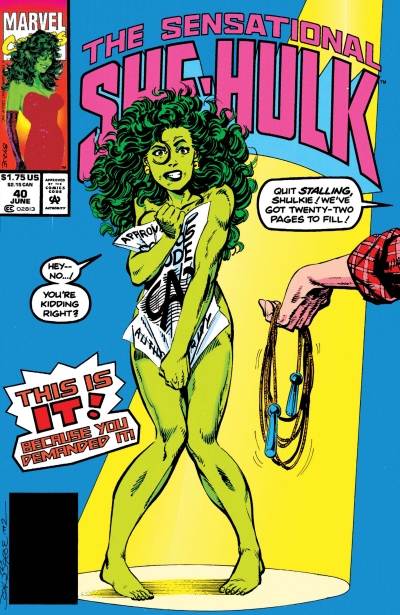 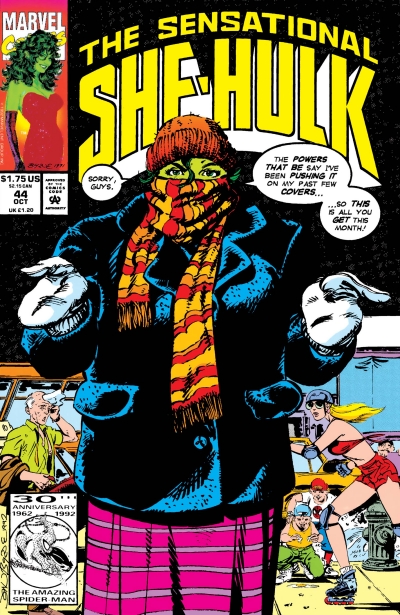 Michael Eury, the writer She-Hulk personally chose in issue #50. His six-part storyline was introduced in issue #50 with a new villain War-Zone spraying She-Hulk with a toxin. This toxin started to depower She-Hulk and led to her death, while visiting her father in Los Angeles. Much of the cast from the Savage She-Hulk days returned, most prominently her ex-boyfriend Zapper, who used his medical knowledge to overdose She-Hulk’s body with gamma radiation to revive her. This overdose led to her taking on a savage appearance that required her cousin Hulk to show up and help stop her from going too far. Ultimately, the arc wrapped up with a return to status quo and the series concluded after a few more fill-in issues.

Never a character left to languish in limbo too long, She-Hulk next showed up controlled by the Puppet Master and attacking Fantastic Force, a Fantastic Four spin-off team. The leader was a grown-up Franklin Richards, who quickly added She-Hulk to their roster. Over the short timeframe before the book’s cancelation, She-Hulk continued her romance with Wyatt Wingfoot and she helped foil a plot orchestrated by Diablo. She even offered to house the team in her apartment in the final issue. 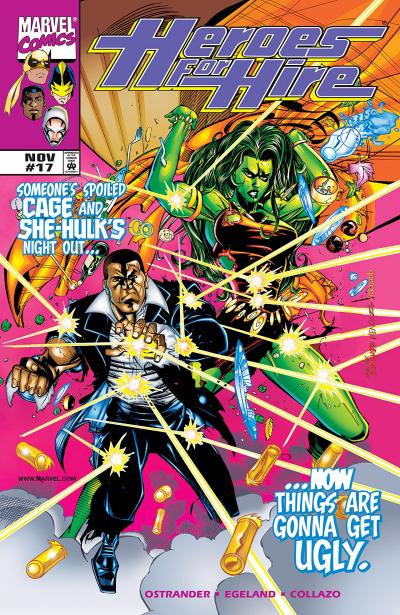 She-Hulk appeared in roughly half of the issues of Heroes for Hire and only officially joined as a field agent for a couple missions. Originally only hired as the group’s lawyer, She-Hulk would often make jokes about needing her fees and being billable by the hour. Eventually, she stopped refusing to go on missions and helped with a mission against the Master of the World, as well as one on Mount Wundagore as part of a crossover with Quicksilver’s solo title. The most page time she received was in issue #17 in which she teamed up with Luke Cage and lost a bet to go on a date with him. Her prejudice against ex-cons softened after he told his story and the two seemed to be hitting it off before Titania and her husband, the Absorbing Man, showed up at the same restaurant to start a fight. The team dissolved two issues later, with Jen only appearing to ensure the delivery of severance packages.

The start of the third Avengers volume began after the Heroes Return event. Kurt Busiek wrote the first 56 issues and George Perez drew a majority of them. Almost every Avenger made an appearance in the first several issues but She-Hulk officially joined in issue #27 as a temporary replacement for the missing Vision. In this short stint, she traveled to South America to face off against Kulan Gath. Of course, the artist used this opportunity to change her outfit into a medieval metal bikini. True to her word, the next arc helped bring Vision back into the fold, so She-Hulk left the team. However, she did come back for a crossover with the Thunderbolts and was part of the massive roster during the long Kang Dynasty arc.

After this culmination of Kurt Busiek’s run, Geoff Johns took over the reins and made She-Hulk

one of the members of a roster of around a dozen Avengers. For the first half of the run, Johns wrote her as a stock character in the large cast. However, at one point Captain America relied on her legal expertise to help navigate the intricacies of disputes between the United Nations during a period where the Avengers were temporarily placed in global power. In the proceeding story “Red Zone,” She-Hulk was one of several Avengers that investigated a flesh-eating virus cloud that suddenly appeared at Mount Rushmore. After, the team discovered the source was a United States bio-lab and She-Hulk inadvertently freed the A.I.M. agents that unleashed the cloud, who proceeded to riddle her hazmat suit with bullets. Fellow member Jack of Hearts tried to fly her to safety but the two heroes’ power sets reacted unexpectedly, throwing She-Hulk into an uncontrollable rage. In her mania, she took out the remaining Avengers and fled to find Bruce for help.

The Avengers were delayed in seeking out their missing member until the Red Zone conflict was resolved. In fact, Johns’ final major arc was titled “The Search for She-Hulk” in which Jennifer received some considerable character development. A scared Jennifer was in Bone, Idaho, a town near where her cousin Bruce had recently been sited. When the Avengers showed up to take her back, Jennifer panicked and transformed into an enraged She-Hulk. The proceeding fight practically leveled the small town, though fortunately no one was killed. After fending off the Avengers, Hawkeye suddenly returned and managed to annoy her into following him out of town. Before she could kill the archer, Bruce showed up after which Hawkeye accidentally caused him to turn into the Hulk. A classic Hulk versus She-Hulk brawl followed, accompanied with some intervention from the Avengers. The confrontation continued until the arrival of the Jack of Hearts, whose powers absorbed the gamma radiation from the Hulks, after which he used the last of his energy to stabilize She-Hulk’s form. Although she seemed to escape legally from her rage-filled destruction, her guilt over destroying the town was later explored in Dan Slott’s solo She-Hulk run. Johns run ended with Jack of Hearts sacrificing his life and thus not forcing She-Hulk to make the difficult decision of choosing one of them to leave, due to their conflicting powers.

Chuck Austen came on board for eight issues, but She-Hulk was only utilized as a child caretaker for the five-issue arc involving the creation of a new Captain Britain. This nurturing side of her was further explored in her dealings with various teenagers in future series. She-Hulk played a pivotal role in the renumbered issue #500, the final arc of this Avengers volume called “Disassembled,” authored by Brian Michael Bendis. When Jack of Hearts briefly returned to blow up the mansion due to manipulations by the emotionally broken Scarlet Witch, the chaos magic affected She-Hulk by turning her into a raging Hulk once again. Vision was also manipulated into attacking with a group of Ultron drones, and she ended up killing Vision in her rage. She-Hulk was taken out of action by the other Avengers and thus was not present when her friend Hawkeye made the ultimate sacrifice. Her guilt of this and her attempt to undo his death would lead to a pivotal moment in her solo title where she had to defend her importance to the time stream.