Jacques Duquesne was a French citizen who grew up in the protectorate of Sin-Cong, located in Southeast Asia. His father, Armand, was a government official representing France's interests in that land, and so the Duquesnes lived in the lap of luxury. The people of Sin-Cong had been under European "protection" for over a hundred years, but bureaucrats like Armand treated them as little more than slaves to their French masters. Despite his behavior towards the native people, Armand was proud of his family's honorable record of service to France. He told Jacques as a young man how their family line could be traced to the Crimson Cavalier, a masked hero who fought for France alongside Freedom's Five during World War I. Armand's prized heirloom was one of the Cavalier's swords, a masterwork of forging with a fierce cutting edge.

[Note: Sources have identified the Crimson Cavalier's real name as both Rene Duquesne or Jean-Luc Batroc. All-New Invaders #12 further indicated the Cavalier was actually a criminal and a smuggler both before and after the war, not a pure and unsullied hero. Still, he was a proud nationalist who fought for France when called upon. The two names indicate the Cavalier may have operated under an alias, and that Swordsman and Batroc the Leaper may be distant relatives.]

After his father mistreated their butler, Nguyen, Jacques went after the man to try and make amends. Nguyen brought him to a meeting led by Wong-Chu, preaching a revolution by the Sin-Congese against their European colonizers. Jacques was taken by the revolutionary spirit and the 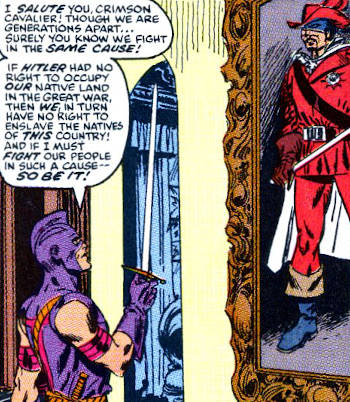 call for freedom. He returned to his family estate and fashioned a spectacular costume to conceal his identity and serve as a symbol for their movement. With the sword of the Crimson Cavalier, he saluted the portrait of his venerated ancestor, re-christening himself the Swordsman.

Over the following year, Swordsman lent his skill with a blade and the theatrical flourish of his identity to the movement. He believed in freedom for the Sin-Congese, but he also secured a promise from Wong-Chu that his father would not be harmed and the two of them would be allowed to return to France unscathed once the revolution was over. In time, the European colonizers were driven into retreat, and the Sin-Congese claimed the land as their own. Jacques decided it was time for his departure, and asked Wong-Chu to fulfill his promise. Wong-Chu indeed reunited Swordsman with his father, revealing that Armand had been killed months earlier by Nguyen, his body preserved simply to mock the Frenchman who foolishly fought beside the revolutionaries that hated him and his people.

His jest complete, Wong-Chu ordered the Swordsman put to death. Jacques Duquesne's natural skill with a sword had only grown during the revolution, however, and he was now a veteran master of the blade. Swordsman defeated a half-dozen men armed with guns while dancing with 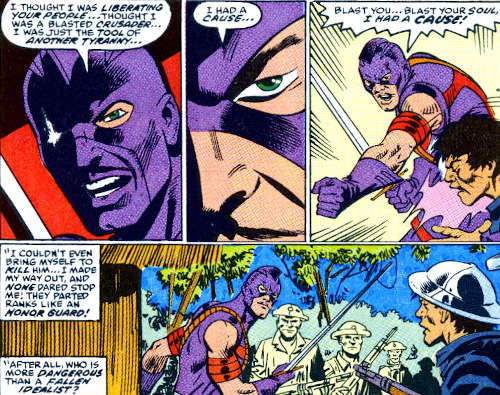 the treacherous Wong-Chu as well. Jacques had lost his innocence and idealism in the revolution and could not bring himself to kill Wong-Chu, the new Communist warlord of Sin-Cong. Victorious in battle but beaten in spirit, the Swordsman left the revolutionary camp without any further resistance. Jacques left his name and ideals behind that night, answering only as the Swordsman from that point onwards. [Avengers Spotlight #22]

[Note: In recent years, the Sin-Cong conflict has retroactively become a major war in Marvel history. After the revolution, it became a political target for both Communism and Capitalism-driven foreign powers. Many Marvel heroes were involved in topical war-time stories, such as Reed Richards and Ben Grimm serving in WWII or Iron Man's origin taking place in the Vietnam War. The passage of time has made these service records incongruous with characters' ages. As of The History of the Marvel Universe #2, the Sin-Cong War has become a fictional stand-in conflict for various 20th century conflicts with heavy American involvement that occurred "X number of years ago," allowing it to move forward in the sliding timescale.]

In time, the Swordsman began working at a traveling Carson Carnival. His sword act led him to become the star attraction, bringing in money with his shows. Swordsman met a pair of teenaged runaways named Clint and Barney Barton. When their abusive foster father came to collect the 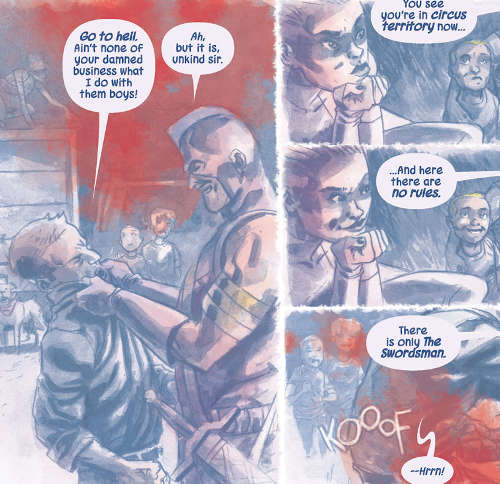 boys, Swordsman stood up to the man and drove him off. At his suggestion, Carson took the Bartons on as workers and they joined the carnival. The boys soon learned that, in order to pay their way in the carnival, they were expected to steal from the patrons, or even commit burglaries and other crimes in the towns they passed through. Clint idolized the Swordsman, but he struggled with the decision to steal. Despite his refusal, Swordsman was kind to Clint at first and refused to hit Clint like his father or foster father before him. [All-New Hawkeye #2-5]

Swordsman's position at the top of the carnival's marquee began to wobble. His assistant quit when he got too close to her with his blades in practice. Clint was eager to try out the act, and so Swordsman began using Clint as his assistant. He also trained Clint in the sword and blade-tossing, looking to spice up his act. However, an archer named Trick-Shot was added to the carnival, and began to draw in more of a crowd. Hoping to borrow some of his success, Swordsman earned a gambling debt from Trick-Shot one night and convinced him to train Clint in archery as well. Even with the changes to his act, Swordsman was starting to lose out in ticket sales for the carnival. Furthermore, his own gambling debts were being called in by a loan shark, leaving him increasingly desperate to find a source of cash. [Solo Avengers #2, Hawkeye (3rd series) #3]

One night, Clint burst in on Swordsman's tent and found he had stolen the cash box from the carnival. Swordsman tried to justify it by claiming he was still the major attraction at the show, and the money was rightfully his anyway. He even tried to bribe Clint with a share of his loot and 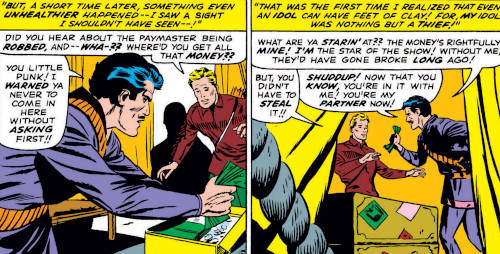 convince him to start a life of crime together as an unstoppable duo. Clint was unmoved and fled from his mentor in disgust. Swordsman pursued Clint to keep him from ratting him out to the paymaster. Swordsman chased him into the main tent and Clint tried to elude the master of blades by climbing up the high wire. As Clint made his escape across the ropes, Swordsman cut the line and sent his protege falling to his death. Clint survived, but just barely -- both his legs were broken by the impact. Trick-Shot and Barney arrived to scare Swordsman off, and he fled in the night, abandoning the carnival and Clint Barton for good. [Avengers (1st series) #19, 65, Solo Avengers #2]

After that, Swordsman abandoned even the pretense of honor. He became a criminal and a mercenary fighting for profit around the globe. Years passed as he earned a living with his blade, but also earned warrants and deportation orders from a dozen countries. Much, much later, the team of costumed heroes known as the Avengers came to his attention. The Swordsman heard about the changing Avengers roster and thought he could secure himself a place on the team and the security that came with it. Swordsman infiltrated the mansion and fought Quicksilver and Scarlet Witch to prove his skill. However, his willingness to resort to deception and dishonorable 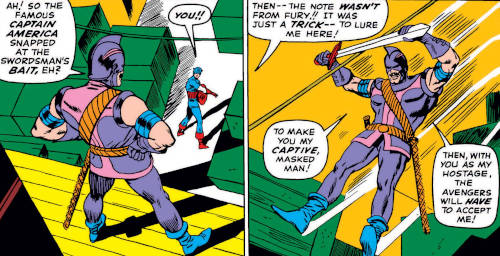 tactics did not earn the respect of the twins or the arriving Captain America. After the Swordsman fled, the Avengers researched their proposed member and learned about his criminal reputation. Once they heard Clint "Hawkeye" Barton's testimonial about his own history with Swordsman, it was clear the man was no Avenger.

Fuming at the rejection, Swordsman put word out among local criminals that he was looking to take revenge on the Avengers. A thug informed Swordsman that Captain America was waiting for word from Nick Fury about new work at S.H.I.E.L.D. Using this information for a ruse, Swordsman drew out the captain and challenged him to fight again. They fought through an abandoned warehouse until sheer chance brought crashing boxes down on Cap instead of Swordsman. The criminal presented his captive to the Avengers on a plank atop a construction site, blackmailing the team into accepting him as official leader of the Avengers or else he would send Captain America to his death. [Avengers (1st series) #19]