The Swordsman has remained surprisingly dead in the decades since his first passing, but not necessarily inactive. He has been a frequent member of the Legion of the Unliving, resurrected by various parties to oppose the Avengers. The Grandmaster summoned Swordsman for his Legion when he assumed control of Death's realm temporarily, and this shade was compelled to fight the Avengers on the Elder's behalf. [West Coast Avengers (2nd series) Annual #2] On the other hand, the Swordsman who served Immortus in the third Legion was likely a Space Phantom in disguise, given the Lord of Limbo's typical modus operandi. [Avengers West Coast #60] The Swordsman's soul was restored as a zombie by the Grim Reaper along with other fallen Avengers 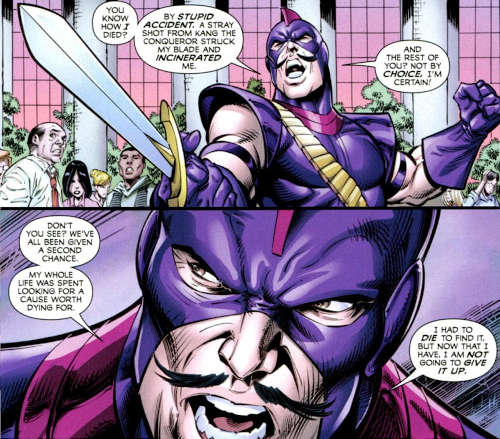 for the fifth Legion, corrupted into blaming their former team for their deaths. However, the intervention of the Scarlet Witch's magic allowed the Legion to purify themselves, and briefly fight alongside the Avengers once more against the Reaper. [Avengers (3rd series) #10-11] When Mikaboshi the Chaos King consumed the afterlife of various realms, Swordsman emerged on the physical plane with other deceased Avengers to fight against the Grim Reaper once more. [Chaos War: Dead Avengers #1-3]

Several other Swordsmen have appeared in the years since Jacques Duquesne passed. Philip Jarvert, a Gatherer and Swordsman from another reality, emerged as a foe and later an ally of the Avengers in Earth-616. Despite the difference in name and age, Jarvert was apparently the doppelganger of Duquesne from his universe. Never quite finding a place in this reality, Swordsman II and his lover Magdalene eventually left for another reality altogether. Andreas von Strucker was influenced by Baron Zemo and the Purple Man for a time into assuming the Swordsman identity as well. Pressed into seeking redemption, Swordsman III fought against and alongside the Thunderbolts until he was killed by his own leader, Norman Osborn. Strucker was later resurrected and resumed his criminal career with his sister as Fenris. Two more men have also appeared claiming the legacy of the Swordsman: one fought Captain America in Atlanta while another, apparently separate individual worked with the Ringmaster in his latest incarnation of the Circus of Crime.

Unexpectedly, it was revealed after his death that Swordsman had a daughter, Adelynn Duquesne. As an adult, she chose to take up her father's mantle and became the heroic Swordswoman. A citizen of France, Swordswoman became a member of the European Union's official super-team, Euroforce. She fought alongside the Avengers against Morgan le Fay and defended Europe from invasion by Hydra after they conquered America.

Perhaps the most famous and direct continuation of Jacques Duquesne's legacy is the Cotati Swordsman. The telepathic plant-people called the Cotati arose with the Kree in parallel evolution on Hala. Spreading throughout the galaxy through their pacifist Kree allies, the Priests of Pama, the Elder Cotati of Earth was planted at the site of the Temple of Agaphaur when the priests first colonized the future Vietnam thousands of years ago. When Swordsman died, Mantis had him buried in the garden at Agaphaur where she grew up. Mantis's destined role as the Celestial Madonna was to bear the Celestial Messiah, child of human and Cotati. The Elder Cotati bonded 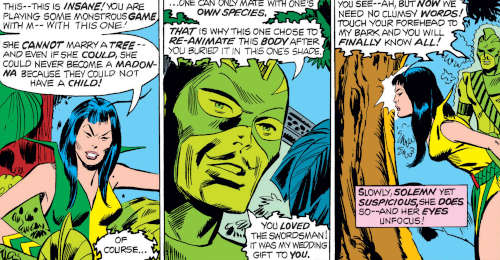 with the Swordsman, assuming his physical likeness and an imprint of his personality in order to serve as Mantis's divine mate. The two of them were married and rose into a higher spiritual plane together after their wedding, conceiving the foretold child, Quoi. The connection between Swordsman and the Prime Cotati was so strong that the Avengers sometimes even recognized the Cotati Swordsman as a former member of the team.

The Cotati Swordsman came to regret his actions, however. The sacrifice he made to become human enough to mate with Mantis meant separating from the Cotati collective consciousness. Used to experiencing life through the hive mind of the grove, in touch with others, the Elder Cotati was now alone with his own thoughts, which were themselves colored significantly by his imprint of Jacques Duquesne's mind. His hybrid messiah son was frequently allowed into communion, but the Prime Cotati was still considered too corrupt by humanity to rejoin his community. Quoi grew to adulthood and no longer needed his father's guidance, leaving the Elder Cotati rudderless and without purpose.

Jacques Duquesne's tendency towards bitterness and self-doubt indeed began to infect the Cotati Swordsman. Under the ruse of returning the Swordsman's blade to his grave, the Elder Cotati and 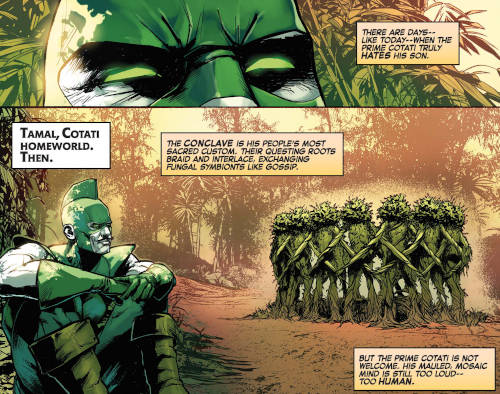 Quoi journeyed to Earth. At the Temple of Agaphaur, the Cotati Swordsman prepared to reunite with his old grove, the only Cotati hive that would still accept him, abandoning his son to find peace. Quoi reluctantly said good-bye to his father, but soon Alchemax assaulted the temple to harvest Cotati plant-life for profit. The Cotati Swordsman managed to reassume his human body, but went mad as he felt the grove die in his mind.

This experience radicalized Quoi and the Elder Cotati and they prepared a holy war against meat-life throughout the universe. They drew the Avengers into the conflict between them and the newly-united Kree-Skrull Alliance. The Cotati Swordsman and Quoi tricked their former friends into assisting them at first in establishing plant-life supremacy in the universe. Their betrayal led the Avengers and Fantastic Four to side with the alliance, but not before the Elder Cotati killed the trusting She-Hulk. The Cotati planned to use the Great Vibranium Mound in Wakanda to power a 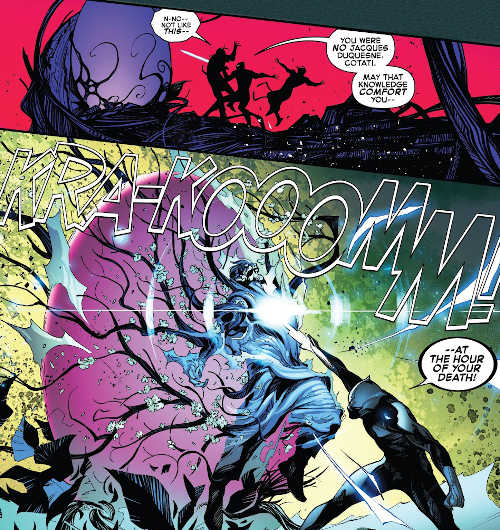 Death Blossom, enhancing Quoi's powers as the Messiah to control all plant-life in the universe and turn it against the meat creatures. The Cotati Swordsman hated his "meat side" as Jacques Duquesne and blamed it for all his problems. As he defended the Death Blossom from Black Panther in a swordfight, though, T'Challa defended Duquesne as a hero and Avenger to his final moments. The "meat" had persevered despite his struggles -- it was the plant who gave in to his bitterness and let it change him. The Black Panther killed the Cotati Swordsman, stabbing through him into the Death Blossom with the magical star-sword, ending the Cotati's threat to Earth and all other life.

(The Cotati Swordsman also seemingly appeared during the Crossing, hunted by his vengeful ex-wife Mantis and her paramour Kang. The story was that Mantis felt tricked or 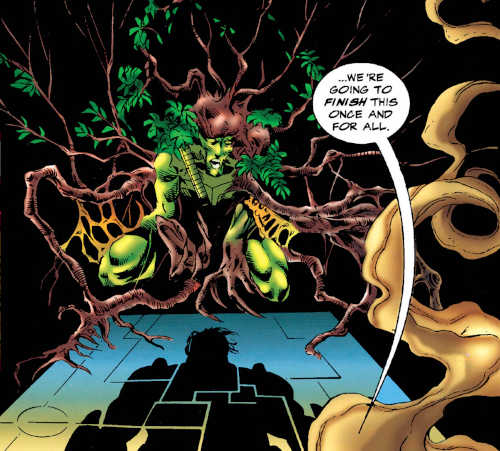 manipulated into marrying the Cotati, and now swore vengeance against the Cotati and the Avengers for allowing her to be used. The Elder Cotati was kidnapped and imprisoned for a time after trying to warn the Gatherer Swordsman about the oncoming threat. However, later revelations indicated this Swordsman -- like Mantis and others involved in the Crossing event -- was actually a Space Phantom acting out a grand deception on behalf of Immortus.)