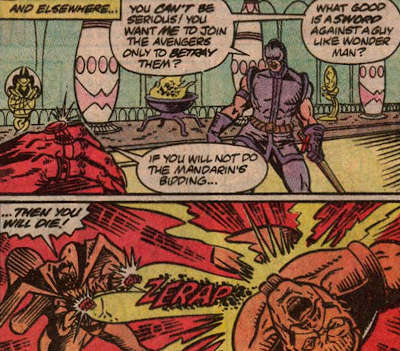 In What If..? (2nd series) #5, the origin of Wonder Man happened differently, with Simon Williams trusting the Avengers and betraying Baron Zemo earlier, leading to his survival. Wonder Man became a mainstay powerhouse for the Avengers, even after their first major roster shake-up led Thor and Iron Man to leave. As a consequence, when Mandarin suggested Swordsman infiltrate the Avengers on his behalf, Swordsman refused out of fear of crossing Wonder Man. He was summarily executed by the Mandarin for his impudence. 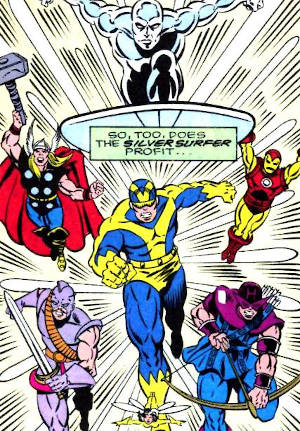 What If..? (2nd series) #41 showed a timeline where the Fantastic Four never formed, dying in the fateful rocket crash that brought them back to Earth from the cosmic radiation storm. Therefore, it focused on the time period where Galactus first came to Earth, and the Avengers were forced to face the Planet-Eater instead of the FF. As he did in our reality, the Swordsman responded to a call for all Avengers past and present to assemble, although his power sword was woefully inadequate against Galactus. Still, the valor and courage of humanity not only swayed the Silver Surfer from his master's side, it even pressed Uatu the Watcher into physically confronting the Devourer of Worlds. Uatu died, and Galactus was sated on his cosmic energies. He chose to leave Earth unmolested, out of respect for the Watcher's sacrifice. After that, both Swordsman and Silver Surfer would go on to become mainstay members of the Avengers.

In Heroes Reborn, a man called the Swordsman was a founding member of the S.H.I.E.L.D. sponsored Avengers roster. His impulsive bravado led him to charge into battle with the Hulk, getting both arms crushed in the behemoth's massive fists. Swordsman was out of action until after the Heroes Returned to Earth-616, leaving him with the moniker the Last Avenger. Later stories suggested Swordsman was actually a version of Wade Wilson, as he adopted the identity and irreverence of Deadpool after being treated for cancer. As Deadpool, his nihilism led him to turn against the ersatz team of heroes called the Remnants he founded after the Avengers left. This version of Deadpool was recruited by Dreadpool for the multi-dimensional Evil Deadpool Corps, and was one of the mass casualties in their battle with the Good (well, less-Evil) Deadpool Corps.

When Franklin Richards constructed a second incarnation of the Heroes Reborn universe, the Swordsman reappeared. However, THIS version carried the Ebony Blade, implying he was a version of the Black Knight instead of Jacques Duquesne or Deadpool. This incarnation of the Heroes Reborn Earth was little more than a vivid dream or memory of the original, and the people found there did not have independent souls. They were easily taken over by the Fantastic Four's enemy the Quiet Man, and used as foot soldiers in his campaign against Reed Richards. When Psycho Man attempted to seize power there, Franklin undid his second conjuring of that universe, causing Swordsman and the others to fall as lifeless constructs.