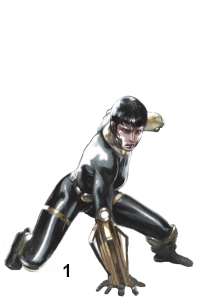 1) Daisy's covert uniform from Latveria was made of a black material with orange highlights. It included an orange brace around her neck and an orange line down her chest, with a jagged line in the center resembling a tremor on the Richter scale. Orange bands on her arms included a smaller Richter jump as well. Her metal stabilizer gauntlets helped offset the vibrational kickback from her powers. [Secret War #2]

3) As Director elect of S.H.I.E.L.D., Daisy wore what was essentially the normal S.H.I.E.L.D. uniform but with an inverted color scheme. Her uniform was white with black boots, gloves, belt and shoulder straps. [Secret Avengers (2nd series) #4]

4) Following her ousture as director, Daisy went back to wearing a traditional field agent uniform. She grew her hair out longer and wore a different version of her gauntlets at this time. [All-New, All-Different Marvel Point One #1]