In the Ultimate Universe, Cadet Daisy Johnson was driven out of S.H.I.E.L.D. for striking a superior officer after he tried to assault her. Nick Fury secretly approached her afterwards and recruited her for his team of West Coast Ultimates. Daisy was granted earthquake powers and given powered gauntlets to help regulate her abilities. As Quake, she served as field leader and the most stabile and reliable member of the WCU. Many of her teammates were not so stabile, 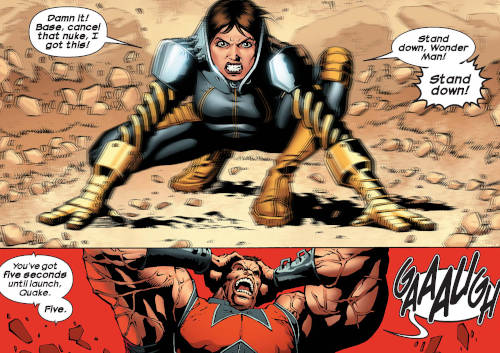 however, and after Wonder Man nearly Hulk-ed out on a failed mission to capture a terrorist leader, it was decided to place the West Coast Ultimates in suspended animation before trying with them again.

When the United States fell apart after a series of disasters, California and the West Coast attempted to secede from the Union as an independent nation. A kingmaker named Ford uncovered the West Coast Ultimates' storage facility in an abandoned S.H.I.E.L.D. station in California. He revived the group and told them lies about Captain America stealing the Presidency and wanting to strike against the people of California. They attacked the Ultimates but, when Quake realized she had been lied to, she switched sides and explained to Cap the details of what Ford had told them.

THE QURIOUS CASE OF QUAKE

Quake, Daisy Johnson, was created by Brian Michael Bendis for his prestige format limited series Secret War, in many ways a backdoor pilot for his run on New Avengers. Originally drawn based on Angelina Jolie from Hackers, Daisy Johnson represented Marvel's efforts to redefine mutants as something other than "somebody born with powers." Daisy actively rejected the label of mutant, identifying herself as someone who doesn't possess the X-Gene but inherited "genetic damage" from her father's self-experimentation. Daisy became a trendsetter for the 21st century and super-beings who spontaneously developed powers for various reasons with no outside trigger, but were no longer considered mutants, per se.

Years later, in the Marvel's Agents of S.H.I.E.L.D. television show set in the Cinematic Universe, a seemingly unrelated character was introduced named Skye. A computer hacker and activist, the Chinese-American Skye's birth name was supposedly "Mary Sue Poots,” and she joined S.H.I.E.L.D. in part to find out more about her mysterious birth parents.

During season 2's full-length Inhumans arc, Skye was exposed to Terrigen and developed earthquake powers. She discovered her mother was an Inhuman named Jiaying, but also that her 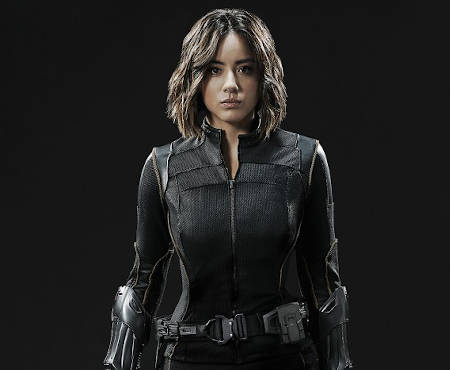 father was the Cinematic Universe's equivalent of Mister Hyde and her birth name was intended to be "Daisy Johnson." In response, the comics' version of Quake was also revealed to be Inhuman and, while she was never exposed to Terrigen, the "genetic damage" she inherited from Hyde triggered the latent Inhuman genes she inherited from her mother, making her effectively a NuHuman. Just an odd example of two very different characters being reworked on the fly to function as counterparts to one another.