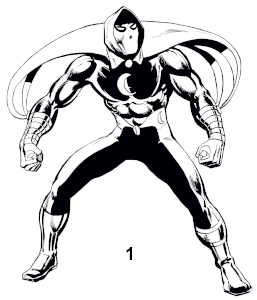 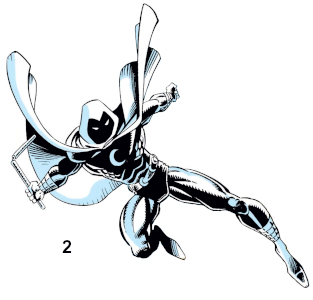 1) Moon Knight's original costume was a jet and silver all-encompassing body suit, alternately reflective and not so that it appeared unnaturally dark or shiny depending on the situation. The suit had a crescent moon symbol on his chest and a belt with additional moons on it, represented by his crescent throwing darts. He wore banded metal gloves and boots, with his collapsible truncheons latched to the boots. Moon Knight had a full facemask with opaque eyepieces, covered further by a hood and a short half-cape fastened to his gloves. [Werewolf by Night (1st series) #32]

2) Moon Knight's classic costume was only a slight departure from his first look. He adopted a longer glider cape, allowing him to catch air currents and leap safely from the Moon-Copter when needed. Spector wore a slightly smaller belt and stopped using the heavy silver cestus gauntlets of his first werewolf-fighting suit in favor of more standard gloves. Finally, perhaps mostly as an artistic choice on the comic book page, his hood now cast a deep shadow over his face, often obscuring his silver face mask in darkness. [Rampaging Hulk #11] 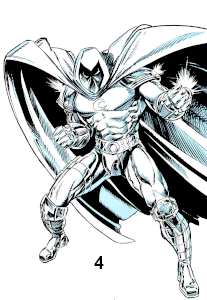 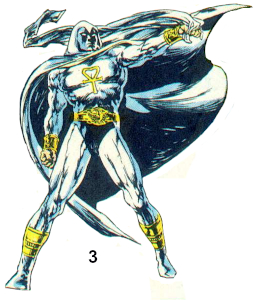 3) When he returned to action as the Fist of Khonshu, Moon Knight kept his traditional costume's look with a silver bodysuit, hood and cowl. The crescent moon on his chest was replaced with a golden ankh. Similarly, he added an ornate golden belt, wristbands and leg bands. He later reverted to the crescent moon symbol in place of the ankh. [Moon Knight (2nd series) #1]

--) After moving away from a direct relationship with Khonshu, Marc returned to his classic suit. [Marc Spector: Moon Knight #1]

4) Moon Knight's ShadowKeep era armor was largely a heavier, metallic version of his traditional Kevlar suit. It had additional silver-plated epaulets and boots, as well as new projectile launchers for his crescent darts in his gauntlets. [Marc Spector: Moon Knight #38] 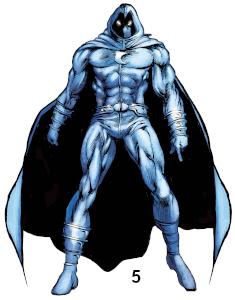 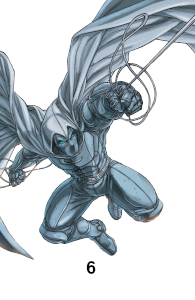 5) After being crippled and eventually returning to action, Moon Knight adopted a slightly different set of "vestments," as he called his costume in service to Khonshu. This version of the set had a prominent zipper or seam on the front, with a crescent moon clasp sitting over it. He had several rows of crescent darts slung over his boots and gloves. Spiked knuckles were often included as well, to increase the level of brutality he was capable of administering. [Moon Knight (5th series) #5]

6) Moon Knight began wearing a new armor forged of Carbonadium during Dark Reign. The surface of the suit was significantly more ridged and detailed than his cloth or Kevlar wear. The crescent moon on his chest was imprinted into the design. His gloves were larger to incorporate new weaponry incorporated into them. His mask now had two lines down the face as well. [Vengeance of the Moon Knight #1]

7) In a new three-fold expression of Khonshu's will, Moon Knight adopted several looks which he transitioned between as necessary. As “Mr. Knight,” he wore a three-piece suit with a four button vest, tie, gloves, and shoes, all completely white. He wore a white face mask with a moon emblem on his brow, and crescent moon cufflinks. As Moon Knight, he now wore a base black suit of resilient material, with additional adornments of stark white color. These included extra armor plating in the shape of several overlapping crescent moons on his chest and shoulders, crescent bands on his sides, shins and forearms, a white hood and retractable cape. As the Priest of Khonshu, he wore a more ceremonial bone armor, ancient wrappings and even a bird-like skull over his mask. [Moon Knight (7th series) #1] 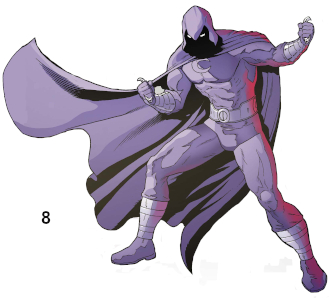 8) After becoming more centered, Moon Knight stabilized on a single version of his classic costume. This version was briefly recast in purple instead of white while infiltrating the Societe de Sadiques. [Moon Knight (1st series) #199]