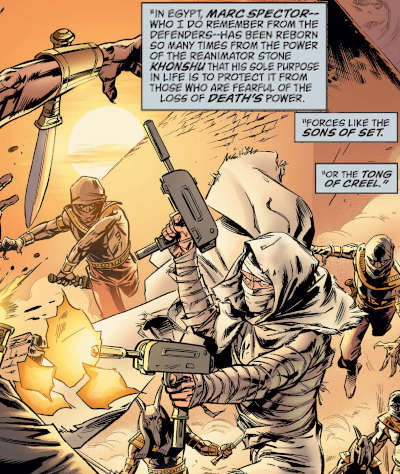 In Earth X, the reanimating stone statue of Khonshu was revealed to be another aspect of the Vibranium meteorite seeded on the Earth by the Celestials. It brought Moon Knight back to life so many times, he lost count. But just as the moon has no light of its own but merely reflects the sun, it was revealed Moon Knight was not actually alive, but merely reflected the illusion of life. Spector became little more than a defender of the stone, which was targeted by death cults such as the Sons of Set and the Tong of Creel, for its resurrection properties were seen as blasphemous to them. When Mar-Vell came to claim the stone on his quest, Moon Knight was finally allowed to die. The stone's hold was broken and he entered the Realm of the Dead to join Mar-Vell's side there as well, fighting against the hordes of Thanos.

Ultimate Moon Knight was quite similar to the traditional version. This Marc Spector was a former Navy Seal and subject of a failed Super Soldier program, although the details were never revealed. He also suffered from multiple personalities, experiencing representations of Marc Spector, Moon Knight, cab driver Steven Grant and an unnamed and unexplained young girl inside his head. These personalities debated with each other about what to do and who should be in control at different times.

Moon Knight made a plan to bring down the Kingpin, but the situation became complicated when 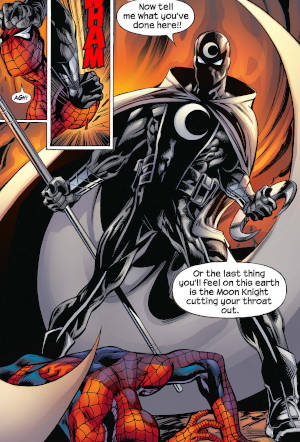 Fisk started laying low and was targeted for a coup by Hammerhead. Multiple parties converged on Hammerhead including Spider-Man, Iron Fist, Shang-Chi, Elektra and Black Cat at the same time as Moon Knight, resulting in a farce. Later, Daredevil recruited several heroes to conduct a more coordinated attack on Fisk's organization. It was agreed that Moon Knight would infiltrate Kingpin's organization as his new "hand," posing as a top assassin Ronin to replace the lost Elektra. Doing so required Spector to fashion a new personality, however, and Ronin temporarily overwhelmed the other personalities and actually captured Spider-Man for the Kingpin, instead of merely pretending to do so. Iron Fist had already betrayed Ronin's real identity to Kingpin after his daughter was threatened, and Fisk lashed out at and beat Spector after Spider-Man was turned over to him. Ronin was beaten, shot and left in a river to die, but his Super Soldier treatments apparently allowed him to survive. Marc Spector went to the NYPD and unmasked, publicly coming forward with his identity to press charges against the Kingpin, finally bringing about the arrest of Wilson Fisk.

Marc Spector's adventure with Count Nefaria and the Ultron head proved prophetic when Ultron finally resurfaced and lay waste to the civilization of man. The Age of Ultron began with a legion 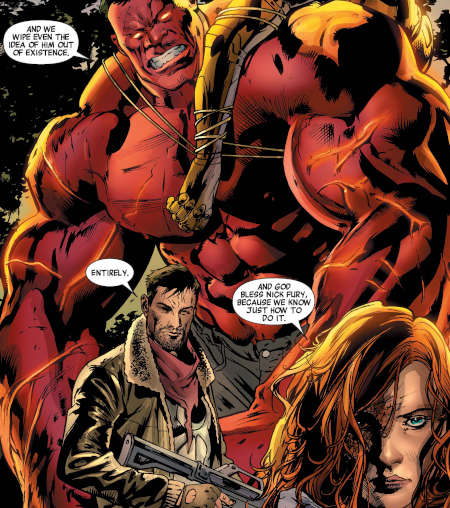 of Ultron drones annihilating most major cities in America. Moon Knight was working with S.H.I.E.L.D. agents in San Francisco when the attack went down. He ended up in an alliance with Black Widow, searching Nick Fury's safehouses until they found plans for what to do in such a disaster. They made their way to another safehouse in the Savage Land, meeting up with other surviving heroes from the Ultron attacks. This timeline was eventually erased when Wolverine and Sue Richards used a time machine to prevent the final rise of Ultron.