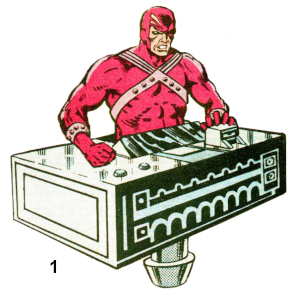 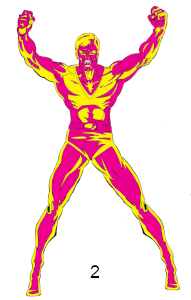 1) Korvac originally wore a skintight purple bodysuit and skullcap. The fabric exposed his face, but concealed his artificial left eye. He wore metal studded bands on his chest and around his gloves. [Giant-Sized Defenders #3]

2) In his guise as Michael, the Enemy, Korvac typically dressed in unassuming clothes or workout attire. His true power was revealed when he was surrounded by his energy aura, an odd pattern of yellow and purple light glowing from within. [Avengers (1st series) #168] 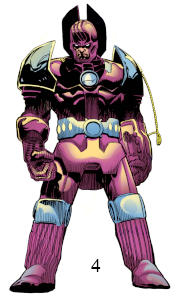 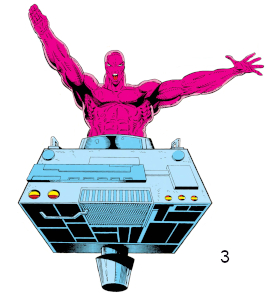 3) Korvac was resurrected in the design of his half-human cyborg form, but was now fully artificial. His upper body resembled Mainframe, the 31st century version of the Vision he emerged from. [Guardians of the Galaxy (1st series) Annual #2]

4) Korvac next appeared as the Machine God, retaining some of his cosmic power but also remaining a cyborg. His new bipedal form strongly resembled the armor used by Galactus, whose cosmic knowledge he stole. [Captain America (3rd series) #17]

--) In his subsequent appearances, Korvac had appeared in both his radiant cosmic form and his man-machine cyborg incarnations.

With 693 Issue Summaries online, chances are you may not have read the following Issue Summary: