On Battleworld, Baron Michael Korvac and his wife Carina ruled the kingdom of the Forest Hills. Their biggest concern seemed to be Baron Simon Williams, the Wonder Man of the neighboring Holy Wood, who had political aspirations to annex Forest Hills into his kingdom. Korvac's personal guard were the war heroes known as the Guardians. However, this Korvac was actually an aspect

of the cosmic being who existed prior to the final Incursion. He held within him vast power and knowledge of the universe before Doom's Battleworld, which he kept suppressed until such a time as his power was strong enough to oppose Doom's rule.

Korvac was not strong enough to fully contain himself, however. Bits of power and knowledge leaked out from his mind to infect others in Forest Hills with "the Madness." People became obsessed with "stars," mythical point of light in the sky that were considered heresy under Doom's Law. Baroness Carina was among those who succumbed to the Madness and had to be killed. Korvac began using his psychic powers to assist the Guardians in hunting the cause of the Madness, unaware that he was that cause. This led to the full awakening of Korvac's powers and memories, and he recalled the multiverse before Battleworld and his efforts to preserve that reality. Doom dispatched the Thors to annihilate Forest Hills and the Holy Wood, eliminating the stain of heresy from Battleworld. Korvac was not yet powerful enough to challenge Doom, and so his final act was to preserve the lives of his Guardians, allowing them to carry on in secret with the knowledge he tried to preserve.

In What If..? (1st series) #32, the Avengers' final battle with Korvac went differently. Instead of 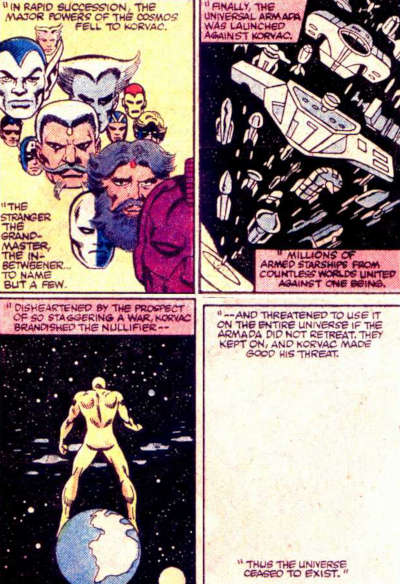 finding doubt in Carina's eyes, this Michael saw faith and determination. It allowed him to defeat the Avengers utterly, obliterating them from existence. His plans were in peril, however, for the death of the Avengers was detected by many of the cosmic being he sought to avoid, from Odin and Zeus sensing the death of their sons to the observations of the Watcher. Michael then resurrected the most powerful and most useful of the Avengers to serve as his pawns, taking the fight to cosmic principalities first while Korvac fortified Earth from outside interference. Several attempts by the cosmic beings to stop Korvac failed, leading to the death of potent entities such as Galactus, the Stranger, and the Grandmaster, as well as the annihilation of the moon and the Living Tribunal destroying Earth's sun. When the Watcher returned with a space fleet of the forces of the universe to continue opposing him, Michael realized his plans could never be fulfilled. In defiance of those who stood against him, he activated the Ultimate Nullifier he had acquired from Galactus, destroying the entire universe.

In a divergent reality from the TimeQuake Saga, the Time Keepers manipulated Korvac for their own purposes, diverting his passage through time so that he reached the 22nd century of Ultra-Vision instead of Galactus' ship. Korvac was inspired to conquer this Earth instead of his original 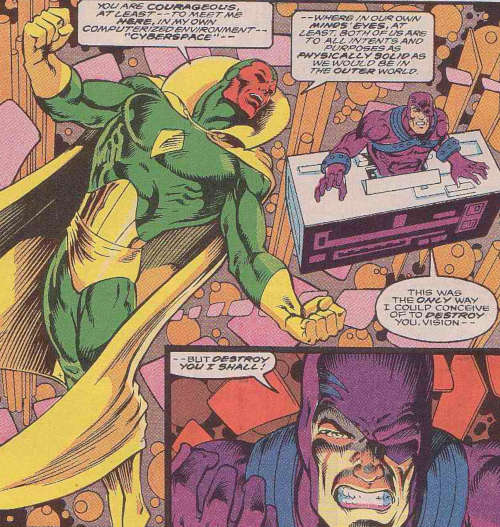 goals, which suited the Time Keepers who needed Ultra-Vision, a nexus being, destroyed in order to preserve their existence.

Korvac summoned the Guardians of the Galaxy from his timeline and mesmerized them into his service, then used the heroes to defeat the temporally local Cosmic Avengers, making them his slaves as well. The Avengers allowed Korvac to gain access to Deimos, the Martian moon which housed Ultra-Vision's super-computers. Korvac plugged himself in to Ultra-Vision, assaulting the Earth ruler in cyberspace and ultimately destroying and absorbing his programming, taking full control of the Deimos station by the time the Avengers and Guardians shook off their mesmerism. Still, Yondu's mystic senses detected a vestige of Korvac's mental patterns still existed in his original cyborg body. Irondroid of the Cosmic Avengers connected with that body, broadcasting an inverse wavelength to those patterns which interfered with Korvac's cybernetic consciousness, wiping him out and leaving Earth free of his influence.

With 703 Issue Summaries online, chances are you may not have read the following Issue Summary: