Bonita Juarez was born in Buenavista, New Mexico, where she and her brothers were raised Catholic. A kind and compassionate woman, Bonita gained a Masters in social work and devoted her life to the church. One night while in a car with Father Mendiguez, Bonita was told that her funding was going to be cut. Bonita tried to persuade Father Mendiguez that the children were in need of the church program, but Father Mendiguez could not be convinced and explained that the decision came from the Archdiocese. Bonita requested that he stop the car and, when he did, she rushed from it, wanting to be alone to think. Father Mendiguez asked her to get back into the car, but Bonita told him that nothing could happen to her out in the desert. However, as she wandered further into the night, Bonita realized that she had become lost, and was beginning to border on dehydration and exhaustion. Suddenly, Bonita noticed something streaking across the sky towards her position in the desert. Approaching too fast for Bonita to run away, the meteor crashed moments later into the desert mere inches from her, bombarding her with energies. As she examined the strange object in the ground, Bonita wondered why it was releasing a cold fire.  [Avengers Spotlight #24]

Bonita initially believed that her newfound gifts were the work of the Devil and almost confessed to Father Ramirez about what had happened to her. However, as she prayed for the chance to confess, something came over her and she fled from the church, feeling confused and crying, Bonita ran blindly into the middle of a hold-up, where bullets were flying freely around her. Fearing she would be shot, Bonita released her power, creating a massive firebird flare, which startled the bandits.  In the end, the would-be thieves surrendered, but not before bestowing a name on the young woman – Pajaro del Fuego – Firebird. Bonita eventually saw her abilities as a divine gift from God. Nevertheless, questions about her abilities were still unanswered – including how she could fly, or why she was not harmed by the flames that she controlled. [West Coast Avengers (2nd series) #4] 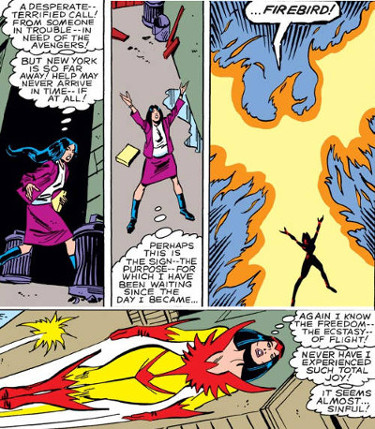 Bonita’s other heavenly calling, working with the church, soon provided her with another cause, “Project Recovery,” where Bonita continued to work with poor children and their families. It was while in the outskirts of Albuquerque, visiting one such family, that Bonita heard a message that would change her life. The son of the family was listening in on a radio that Project Recovery had given him when it picked up a distress call from Rick Jones, who was trying to contact the Avengers. When the boy revealed that the call came from California, Bonita excused herself, claiming that she had many other families to visit. In truth, Bonita was worried about the call, as it sounded like someone was in grave danger and she felt compelled to help. She quickly snuck into an alleyway, where she transformed into Firebird.

Feeling the ecstasy of flight once again (which she felt was almost sinful), Bonita flew to California, where she found several other costumed individuals who were about to face off against the Incredible Hulk, who was currently under the influence of the Corruptor. Firebird and the other heroes worked together against the Hulk but, despite their inexperienced best efforts, the Hulk 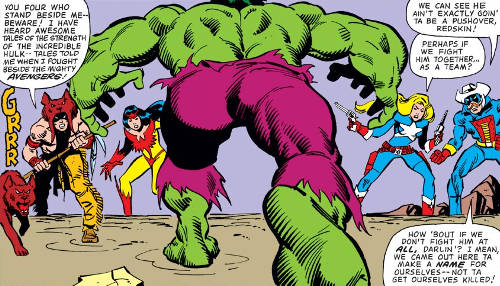 was able to fend them all off. This left Rick Jones to reach out to Bruce Banner, the man within the Hulk, who eventually overcame the Corruptor's influence and knocked out the Corruptor. Firebird and the other heroes were pleased with their efforts and decided to remain together as a group called the Rangers. [Incredible Hulk (2nd series) #265] Unfortunately, the individual members of the group ultimately proved too spread out to work together as an official team and it disbanded.

One night, Bonita's sleep was broken by the crashing of a large, human-sized bird that flew into 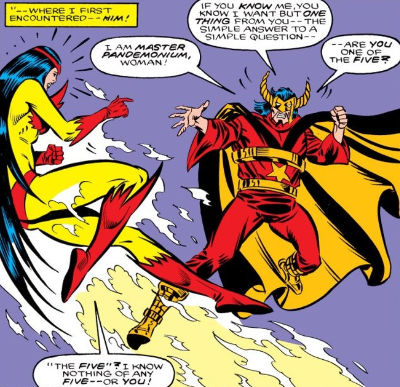 her bedroom. Startled, Bonita instinctively released a large flare of energy, which was often the case when she had not used her powers for some time. Flying into the air, she encountered Master Pandemonium, who demanded to know if Firebird was “one of the five.” Confused by his question, Bonita defended herself by blasting him with a fire flare, though he simply absorbed her energy. The bird, called Azmodeus and actually intelligent, attacked Firebird again and informed Master Pandemonium that she was not one of the five. With no further interest in her, Master Pandemonium unleashed two demons, each created from his very arms, to attack Firebird and hurl her from the sky.

Bonita awoke in the desert, disoriented and feverish, but knowing in her heart that she had to reach the Avengers to tell them what had happened. Already exhausted, Bonita forced herself to fly seven hundred miles to the Palos Verdes Compound, home of the West Coast Avengers, where she fell from the sky and literally into the arms of the Thing. When she recovered from her ordeal, Firebird recounted her origin (or what she knew about it) and her encounter with Master Pandemonium to the Avengers. Soon after, the team received word that the Thing and Wonder Man were being attacked by Master Pandemonium and immediately mobilized to aid him. Firebird offered to go with the team, but was told to stay and rest. [West Coast Avengers (2nd series) #4]

Bonita intended to wait around the Palos Verdes Compound for the Avengers to return, as she wanted to say goodbye and thank them for their hospitality, even as she planned to track down Master Pandemonium on her own. Also in the compound was Hank Pym, who despite being an Avengers founder was currently hanging around the west coast branch without being an actual member. Pym proved very friendly towards Bonita and told her that she was probably the first Hispanic heroine. The Avengers eventually returned from their mission, having saved the Thing and Wonder Man from Master Pandemonium, who unfortunately escaped. She also got to know the Thing, who was sticking around to say his own goodbyes before leaving again. 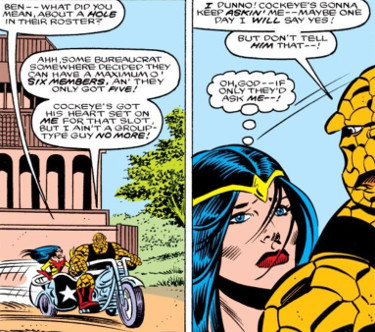 When she got the chance, Firebird said her farewells to Hawkeye, as did the Thing. Bonita then witnessed as Hawkeye asked the Thing, evidently not for the first time, about becoming the team's sixth member, though the Thing once again declined the offer. As Firebird left with the Thing on his motorcycle, she asked him about the Avengers' membership and he explained that their charter required them to have no more than six members and that he wasn't interested at the moment. A forlorn Bonita silently wished that the Avengers had asked her to join them.

Firebird soon began her search for Master Pandemonium, visiting an occult bookstore, where she felt a strange disturbance. The bookstore owner claimed that he had not heard of Master Pandemonium but, urged on by some sixth sense, Firebird demonstrated her power by creating the firebird flare, which caused him to reconsider his answer. The owner told Firebird to check a book called the Darkhold, a rare tome that was last in the possession of a man called Jack Russell. When Firebird tracked him down, she found Russell in battle with the Avengers in his alter ego of the “Werewolf by Night.” Pursuing their own investigation regarding their teammate Tigra, the Avengers had also sought out Russell. [West Coast Avengers (2nd series) #5]

After helping the Avengers capture the Werewolf, Bonita accompanied the team back to their Palos Verdes Compound. Though the Avengers’ mission seemed about to diverge from her own, Mockingbird suggested that Firebird join the group on their mission to find the Cat people, after 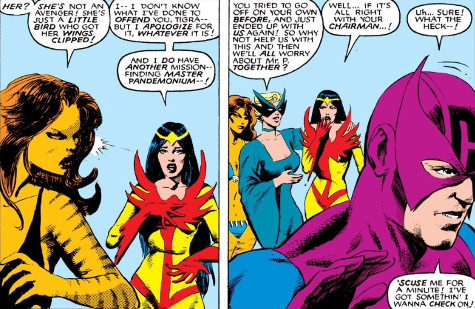 which they would go after Master Pandemonium together. This suggestion angered Tigra, whose mood swings had caused the team to seek out the source of her power, the Cat people, in the first place. Unfortunately for Firebird, she found herself on the receiving end of theses swings, as Tigra had been acting hostile toward her ever since she first arrived at the compound. Hawkeye seemed truly indifference about Bonita joining them but was ecstatic when he managed to convince the Thing to accompany them.

Materializing in “The Land Within”, Bonita was amazed by her surroundings and, in keeping with her beliefs, opted to act with caution on this mission until she was fully aware of what constituted evil. After Tigra was promised help by the Cat People in merging her “two souls,” Firebird and the West Coast Avengers dined in a mighty feast. Nevertheless, Hawkeye voiced his concern that Tigra and the Cat people were holding something back, at which point Firebird added that she also had been experiencing a strange sense of foreboding since they arrived in this realm. She also noted that she was anxious to get back to her search for Master Pandemonium, though the Thing told her to relax. When Hawkeye used the opportunity to pressure the Thing again into joining the team, an offer once again refused, Bonita couldn’t help but be jealous that the offer was not being extended to her and decided that it was her lot to suffer in silence. [West Coast Avengers (2nd series) #6-7]