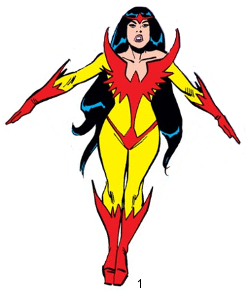 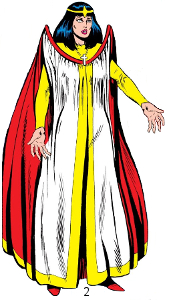 1) Firebird's original costume consisted of a yellow spandex one-piece with a large orange firebird emblem across her chest and a stripe down to her crotch, which then flared out across her hips. She wore matching boots and gloves that had jagged flame-like cuts across the tops of them, and a thin, orange headband with a firebird symbol at the front of it, which kept her long hair back. [Incredible Hulk (2nd series) #265]

2) As La Espirita, Bonita wore a flowing, white, habit-like costume with yellow stripes running down the middle of it that ran into a yellow hem that connected to the yellow hem of a large red cape that was hitched back from panel across her chest so that they resembled angel wings. Yellow sleeves and a yellow panel around her neck rounded out the costume, while Bonita continued to wear red boots, and changed the firebird headband from red to yellow. She also wore a large cross hanging from her neck. Underneath her flowing costume, Bonita continued to wear her original outfit. [West Coast Avengers (2nd series) #17] 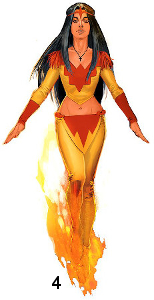 3) Returning to her Firebird codename, Bonita adopted a modified version of her original costume, a yellow spandex one-piece with a sleeker red firebird emblem across her chest that spread down her abdomen and covered her crotch and hips. The wings of the firebird emblem extended out over her shoulders, and re-designed, sleeker red boots. Gone were the red gloves and she returned to wearing a red headband with firebird emblem. She also now wore a long red cape with a yellow trim, similar to her Espirita design. [Avengers Spotlight #24]

--) Firebird adjusted her costume slightly during her tenure with the Avengers. The costume basically remained the same, but the firebird emblem across her chest became smaller and did not extend up over the shoulders. She returned to wearing red gloves, the firebird emblem across her forehead became more of a headband that sat over her forehead, and the cape was now completely red, no yellow trim, and was connected to her costume not by the shoulders, but as a sort of cowl around her neck. [Avengers (3rd series) #38]

4) Firebird eventually ditched the cape on her costume and opted for a more traditional Native American looking costume. Yellow pants were highlighted with a loincloth type panel across her crotch, which had several red flame patterns and a red sash than hung to the left. A revealing midriff top was also yellow with a large squarish firebird emblem across the chest, joined to red shoulder pads with tassels hanging from them. Red squares across the upper arm and red cuffs covered yellow sleeves, while red cuffs also covered her ankles. Bonita continued to wear a red headband, and her cross hung from her neck. [Beyond! #1]

--) Eventually, Firebird returned to wearing the costume that she used during the Beyond! adventure. [Scarlet Spider (2nd series) #7]