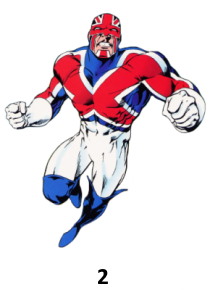 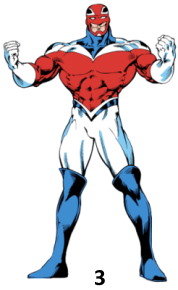 1) When Captain Britain was given his powers, he was first decked out with a mostly red suit, with a large golden lion rampant on his chest (interestingly enough, the lion rampant is the symbol of Scottish royalty). He wore a red and blue mask, with tiny Union Jacks that covered his entire face, but left his hair free. Small Union Jacks also adorned his lower arms. Combined with the uniform he wore the Amulet of Right, the source of his powers, around his neck. Captain Britain initially used a collapsible quarterstaff as a weapon, but Merlyn later evolved it into a Star Scepter forged of mystical circuity. [Captain Britain (1st series) #1]

2) The Amulet and Star Scepter were later transformed into his second uniform - a skintight suit, which displayed a Union Jack pattern on his torso combined with white tight pants and knee-high dark blue boots and white gloves. The entire ensemble seemed more military than his previous suit and was in part inspired by the Royal Horseguard. The most important part of the suit was the predominantly red (with small Union Jack patterns) helmet. At first, the Captain's powers came from the mystical circuitry of his suit. After being resurrected by Merlyn and Roma with the power to harness Omniversal energy directly, Captain Britain's suit merely became a conduit to enhance his abilities. [Marvel Super Heroes (UK) #377]

-) As the suit’s helmet was destroyed during Inferno, Brian had no more costume to wear. In the middle of a crisis, he had no choice but to wear a simulacrum of his original uniform, the problem being that he had grown much since back then, and it didn’t fit him anymore. [Excalibur (1st series) #9]

3) During the Cross-Time-Caper, Excalibur visited many alternate realities, including Earth-1193. There, Brian was given the costume of his counterpart, Captain Marshall, who had died a long time ago. The uniform had the same cut and color scheme as Brian’s previous look, but instead of patterns it displayed simply panes and stripes of color. [Excalibur (1st series) #13] 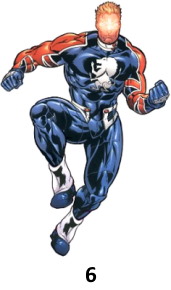 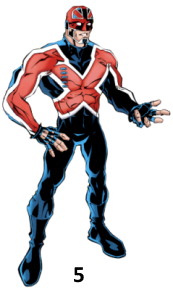 4) After a trip through the timestream, Brian Braddock returned a changed man, a change that was also shown in his new look as simply "Britanic". Wearing longer hair and sometimes displaying white eyes, Brian now wore a skintight red suit with a spider-web pattern of dark-blue filaments centered on his chest. [Excalibur (1st series) #75]

5) Trying to become his ordinary self again (and having need of its force field) Brian returned to a version of the Union Jack Captain Britain outfit. However, it was a darker version. The previously white elements were now black. He also wore short fingerless gloves and shorter boots. [Excalibur (1st series) #100]

6) On Otherworld, Brian was given the Captain Britain Corps uniform his father used to wear, a uniform that combined several elements of his previous suits. A mainly blue outfit, it displayed the lion rampant (however, white this time), while the Union Jack pattern was displayed in stripes on his arms. In addition, when he used his powers, Brian displayed a flaming Union Jack pattern on his forehead. [Excalibur (2nd series) #4] 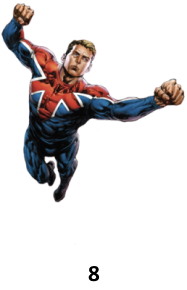 7) After departing the throne of Otherworld, Brian adopted a new Captain Britain uniform. The upper portion evoked the Union Jack in red, blue and white, with golden Albion lions on each shoulder. His helmet had Union Jack cut-outs on the sides of his skull as well. He wore white breeches and fingerless gloves, ending in black boots. His force field was active during this period, indicating this costume was a version of the traditional Corps uniform with mystical circuitry. [New Excalibur #1]

8) In his next reincarnation, Captain Britain left his face exposed instead of wearing a helmet. He wore a blue body suit with the Union Jack draped diagonally over his neckline, with one point down his chest, back, and running the length of his arms. [Captain Britain & MI-13 #2]

9) Brian would return to wearing his second uniform after this, complete with the Omniversal mystical circuitry. [Uncanny X-Force (1st series) #19] When he became a Secret Avenger, the uniform would also color-shift to the darker version he wore after infiltrating the London Hellfire Club as “stealth mode.” In addition to his force field, the uniform had other sensors and features, but they were all dependent on power from his confidence just like his powers in this period. [Secret Avengers (1st series) #22]

10) After being corrupted by Morgan le Fay and passing the Amulet of Right to his sister Betsy to serve, Brian was visited by the Amulet and Sword in his dreams. This time, the shaken and demoralized Brian chose the Sword of Might. Fearful over choosing the path of violence, Brian was nevertheless forced to draw the Sword, and was empowered as the new Captain Avalon, champion of his brother Jamie's kingdom in Otherworld. This new uniform is reminiscent of his Corps uniform, but with its own pattern of gold, white, red, and black. [Excalibur (4th series) #13]