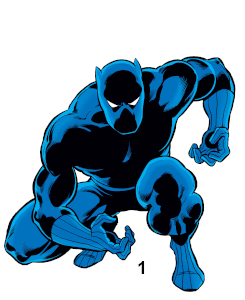 1) The habit of the king of the Wakandas, lord of the Panther tribe, is an all-black body stocking. The black mask completely covers his head, with small cat ears and typically with opaque eye slits. The Black Panther occasionally wears a half-cape slung over one shoulder or a more regal full cape draped from both shoulders. [Fantastic Four (1st series) #52]

2) T'Challa briefly wore a version of his costume with a half-exposed face mask. [Avengers (1st series) #52] 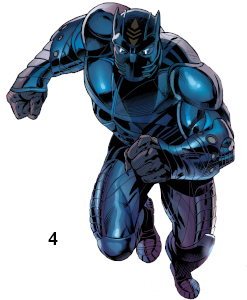 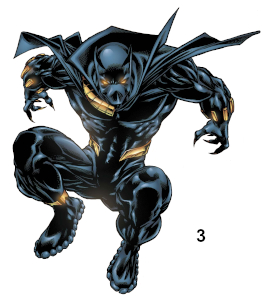 3) The Black Panther incorporated Vibranium into the weave of his habit, with several more stylistic changes. He added gold bracers around his gloves and a gold belt that remained open in the front. Gold straps were also apparent on his right shoulder, especially when he used his full cape. The eye slits of his mask glowed yellow as well. [Black Panther (3rd series) #1]

4) The Black Panther's "thrice-blessed armor" was used for additional protection in serious conflicts against Killmonger or a horde of vampires. He often wielded the recovered Ebony Blade during this period. [Black Panther (4th series) #13] 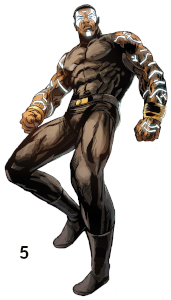 5) After Shuri claimed the mantle of Black Panther, T'Challa fought without the vestments. He wore a black sleeveless outfit with white symbols painted over his face and arms. These symbols were mystical in nature, helping to restore T'Challa's health after his recent injuries. [Doomwar #1]

6) While operating in Hell's Kitchen as the Panther, T'Challa did not have access to Vibranium or Wakanda's advanced technology. His costume was an urban tactical outfit made of traditional materials. [Black Panther: Man Without Fear #512] 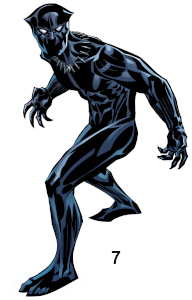 7) After Secret Wars, T'Challa took to wearing a slightly different version of his habit. This attire retained the classic all black look of the Panther suit, but with the "ears" pointed down in a more menacing look. He also had a sectional necklace with a Panther head icon on the front clasp. [Ultimates (2nd series) #1]

8) Initially amnesiac while fighting against the intergalactic empire of Wakanda, T'Challa served with the resistance force known as the Maroons. His attire was based on the Vibranium-enhanced technology of the empire. [Black Panther (8th series) #1]