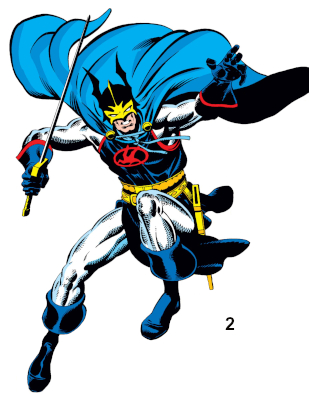 1) When he assumed the mantle of the Black Knight, Dane Whitman adopted his own armor, closer in appearance to Sir Percy than that of his immediate predecessor, his uncle Nathan Garrett. The Knight wore blue-black (or occasionally silver) chain mail under a black tunic with red trim at the shoulders and neck. The sigil of House Scandia was a red eagle within a larger circle on his chest. A gold belt held his scabbard at his waist and gold clasps held his cape. He wore black boots and gloves with the same red trim. (The earliest version of Dane's costume had a bright yellow cape and red gloves and boots, but he quickly switched to more subdued colors.) His helmet exposed more of his face than Percy or Nathan, with eyeholes and his mouth and chin visible. The helmet had a gold trim, evoking the image of a modern hero’s domino mask around his eyes and a small gold fin from the top. [Avengers (1st series) #48]

2) During his time in the Crusades, the Black Knight modified his costume slightly. His helmet now was adorned with more elaborate bat-like wings on the sides, with a bit more detail around the mask. His tunic also had additional fabric hanging from his mid-section. [Avengers (1st series) #225] 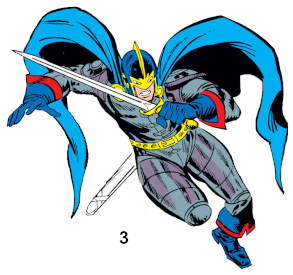 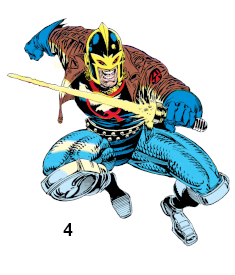 3) When the curse of the Ebony Blade began turning his body into the same metal ore as the sword, the Black Knight began to lose his ability to move. To compensate he was forced to add an exoskeleton frame over the top of his armor to facilitate his movements. [Avengers (1st series) #294]

4) After returning to the Avengers, the Black Knight adopted a more casual style over time. The cape and full armor of the Black Knight was set aside. He began wearing a shirt with his traditional symbol under a leather jacket with the Avengers’ “A” symbol on the sleeves. Dane also wore metallic and more modern-looking boots. He was typically found with his photonic sword instead of the Ebony Blade in this period. [Avengers (1st series) #355] 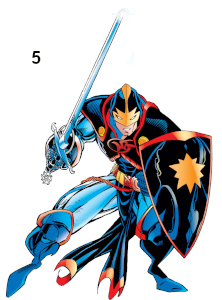 5) As the Pendragon, the armor Black Knight received from the Lady of the Lake was a more elaborate version of his traditional armor and colors. The boots and gloves were larger and it came with substantial epaulets on his shoulders instead of a cape. Like his costume from the Crusades, it also had a loincloth-like fabric from his belt. [Heroes for Hire (1st series) #2]

6) While working with MI-13, Dane wore two different “looks.” First was casual attire with only his helmet and a black leather jacket with the Knight’s red eagle crest on the back to signify his identity. The Black Knight used a photonic shield projected from his glove as a transparent energy screen in this outfit. For more formal outings, Dane wore an elaborate version of his traditional armor. [Captain Britain and MI-13 #1,10] 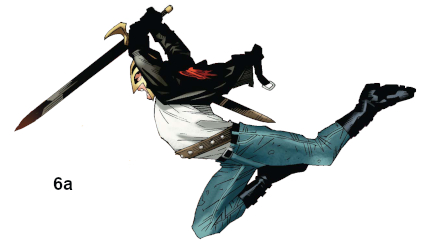 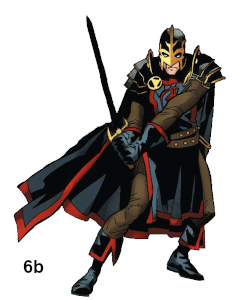 7) Beginning with his time in Weirdworld and the kingdom of New Avalon , Dane began wearing another version of his armor. In particular, his helmet now had multiple adjustible configurations, fully hiding his face or retracting to various degrees. The eagle sigil of Scandia on his chest was no longer shown with a circle around it. His scabbard was moved to his backside instead of his hip. Dane has kept the same basic under armor since, although he has added different elements like a fur-lined cape, epaulets, and other armor pieces depending on his needs. [Black Knight (3rd series) #1]