Dane Whitman’s most villainous doppelganger was the leader of the Gatherers known as Proctor. As the Black Knight of Earth-374, Proctor was once a hero and leader of the Avengers before his disastrous marriage to the Eternal Sersi. Proctor claimed the immortal enchantress grew tired of him despite the Gann Josin bond that left them intimately linked to each other’s brain waves. Proctor succumbed to madness after her rejection and embraced the curse of the Ebony Blade, changing him to possess many abilities common to his Eternal mate. He drove Sersi mad through 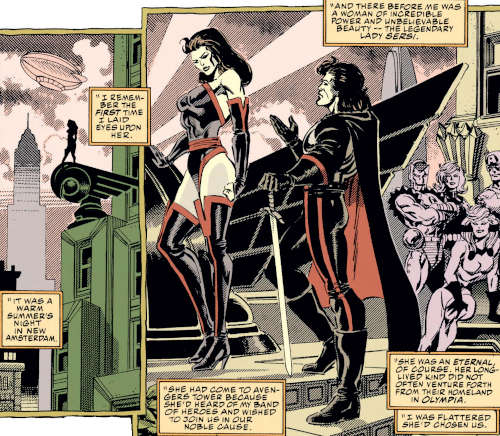 their mental bond and then killed her. Unsatisfied with his vengeance, Proctor began a campaign across the multiverse, finding doppelgangers of Sersi that were unknowingly susceptible to the Gann Josin bond and driving them mad as well. He presented himself and his chosen recruits, the Gatherers, as saviors who swooped in to kill Sersi after her insanity led her to betray her friends and destroy her Earth. After discovering Earth-616 was the Prime Earth, Proctor planned to collapse the entire multiverse around Sersi-Prime, allowing him to kill all versions of Sersi at once as a climax to his vendetta that would end all of existence. The Avengers unraveled his schemes and Sersi finally killed Proctor with his own Ebony Blade, avenging the loss of her counterparts.

On Earth-148, or Ee’Rath, Black Knight was a member of Excalibur alongside Thor, Spider-Man and Yeoman UK of the Captain Britain Corps. They opposed the rise of the tyrant Necrom to their deaths but, after killing them, Necrom besmirched their names by spreading word that Excalibur had betrayed the people of Ee’Rath and joined him willingly. He later raised a zombie version of Black Knight and the others to fight the rebels Kylun and Satneen.

In the Ultimate universe, Corporal Dane Whitman of the U.S. Marine Corps was critically injured saving his comrades-in-arms from an IED in the Middle East. He was recruited from his hospital bed by Nick Fury of S.H.I.E.L.D. to join an early rendition of the Ultimates. Cybernetic 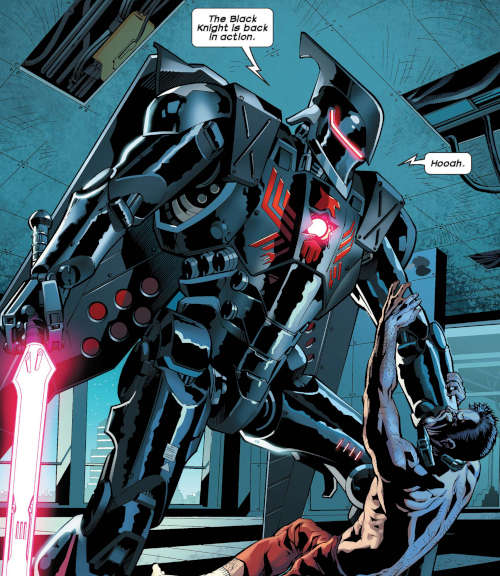 enhancements replaced his missing limbs giving him wings, a laser sword and a body perhaps more robot than man. Despite his raw power, codename: Black Knight was deemed unbalanced along with several other members of his unit and they were placed in suspended animation and forgotten about. Years later, the United States fractured and independents from California sought an edge to use against President Captain America. They thawed out these West Coast Ultimates and spun a story to make them fight against the new S.H.I.E.L.D. Black Knight kidnapped Tony Stark and then engaged Thor and the Invisible Woman on the moon.

In the Earth X timeline, Black Knight became a member of Excalibur. The team was crippled when Dane and his teammates Meggan, Nightcrawler and Spitfire were turned to stone by the Grey Gargoyle. Their leader Captain Britain killed the Gargoyle, inadvertently trapping Excalibur as stone for years, unable to restore them to flesh. Brian sent out members of the Corps for years, 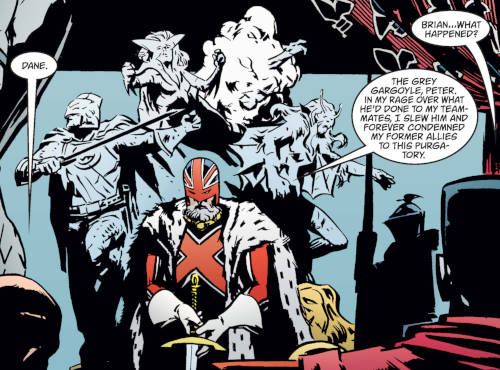 looking for an alternate Grey Gargoyle able to reverse the effects. In time, his ward and adopted son, Ahura of the Inhumans, took up the mantle of the new Black Knight. Dane Whitman and the others were eventually restored when Captain U.K. seemingly found a Grey Gargoyle in the multiverse to do the deed. This was actually a plot by Mephisto, but Dane’s restoration was real regardless.

In What If? (2nd series) #55-56, Operation: Galactic Storm took a different turn. Black Knight and the Kree contingent of Avengers stopped Deathbird from assassinating the Kree leaders Ael-Dan and Dar-Benn. However, the vindictive Ael-Dan executed the captive Deathbird. He correctly identified the Supreme Intelligence as the force behind the attack and both destroyed the living computer and murdered his co-regent, seizing absolute power among the Kree. As a demonstration of his might, Ael-Dan activated the forbidden Omni-Wave Annihilator to destroy the Earth and the Shi’ar homeworld of Chandrilar. Black Knight was thrown into a Kree concentration 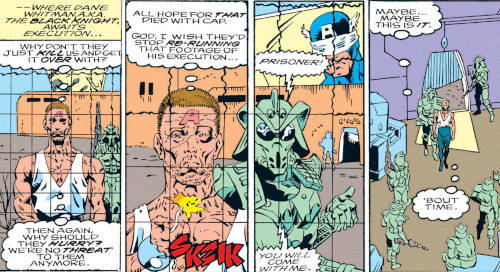 camp with other prisoners of war until Captain America and a homegrown resistance helped to free him. Sersi and Hercules died getting Dane, Crystal and Cap off Hala to meet up with the surviving Avengers in the Shi’ar contingent. Years of guerilla tactics eventually succeeded as the combined survivors of the Avengers and the Shi’ar Imperial Guard found the means to defeat Ael-Dan. Dane Whitman did not survive to see the final victory, however and died on a recovery mission shortly beforehand.

In Exiles (1st series) #26-27, Heroes for Hire, Inc. had taken over the operation of virtually all super-powered “heroes” on their world. However, their world got off-course when Iron Fist and his team did not travel to Japan and die battling Moses Magnum. The full “Avengers package” of their service arrived late with Iron Fist and Luke Cage joined by Black Knight, Black Widow, Scorpion and Colossus. A team of Exiles including a version of Colossus’s sister Magik had come to their Earth to make sure the Avengers died as they were meant to. After causing their Quinjet to crash, Magik brutally cut through the heroes, killing Black Knight last and finishing her mission.

In the future year 20XX, Earth nearly fell to Thanos on Zero Day when he weaponized the Cosmic Cube into a set of Iso-Gauntlets to feed his lust for power. After half the heroes fell, Black Widow fought 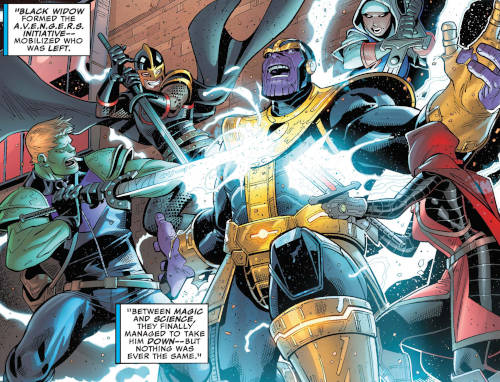 back by forming the A.V.E.N.G.E.R.S. Initiative. Black Knight was among the survivors assembled by Natasha for the final fight against Thanos. Wielding the Ebony Blade, he joined Faiza (with Excalibur), Hulkling (with Excelsior) and Guillotine (with la Fleur du Mal). Through magic and science, Thanos was finally brought down by these heroes and the world pressed onwards.

In the Age of Ultron, the robots devastated London as they did most of the rest of the world. In only 8:30 minutes, they conquered Great Britain. The Black Knight destroyed countless Ultron drones in the early waves and they were apparently enough of a form of life to provoke the curse of the Ebony Blade. Dane holed up in the British Museum with Faiza, Captain Britain and a visiting 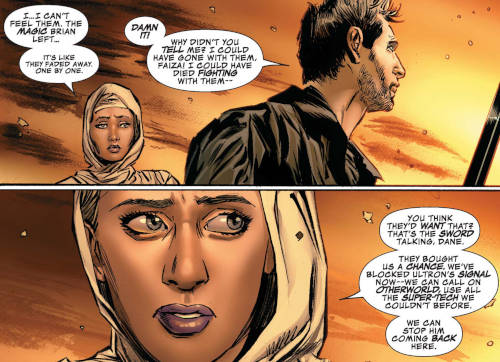 Carol Danvers, sheathing his sword for fear of unleashing the bloodlust it had cultivated. Faiza used Excalibur to connect with the other mystical artifacts in the museum to create a mystical barrier that held off the Ultrons, forming a makeshift bolt hole and medical center for the survivors. Brian, Carol and other allies sacrificed themselves to bring down the Ultron signal in London, giving Dane and Faiza a chance to survive.