Blaming the Avengers for the destruction of their empire, a rebel Kree group called the Lunatic Legion decide to take revenge on Earth. They proudly inform the Supreme Intelligence, currently residing on the Moon, of their plan to use a modified omni-wave projector to transform humanity into Kree, replacing the millions who have been killed. However they are unaware of the Supreme Intelligence itself having been behind the Kree’s genocide in order to jumpstart the survivors‘ development, as the Kree had reached an evolutionary dead end. As such, it can’t allow the Legion to succeed and schemes behind his minions‘ back to stop them. While trying to obtain the components for their omni-wave projector, the Kree oppose the Avengers several times, including Warbird, whose alcoholism has taken a turn for the worse. Her judgement clouded she denies having any problem at all, and continuously endangers the team and innocent bystanders. How longer can the Avengers tolerate her behavior? 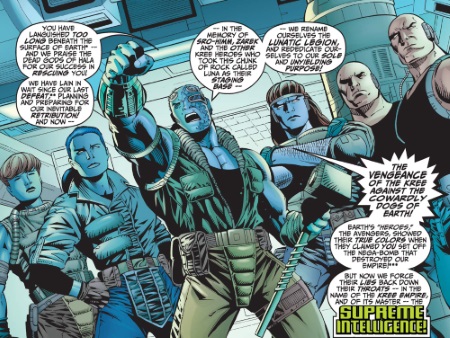 Several months ago, a device called the nega-bomb was detonated, wiping out billions of Kree lives. The Supreme Intelligence had destroyed most of his empire in hopes of ending the Kree's genetic stagnancy. The Avengers were blamed by the remaining Kree who didn’t know about the Supreme Intelligence’s deviousness. Now, a group of Kree soldiers calling themselves the Lunatic Legion plan to take revenge by creating their own weapon which would either mutate the Earth’s population into neo-Kree or kill them. 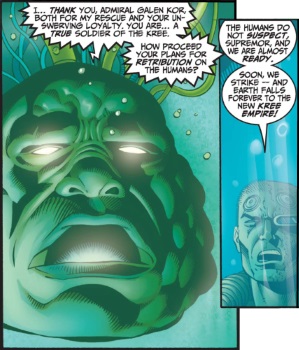 The Lunatic Legion make their way to the blue area of the Moon where the Supreme Intelligence currently resides and inform their exalted leader of their plans to take revenge on Earth. While the Supreme Intelligence thanks them for rescuing it and for their unswerving loyalty, it secretly already makes plans to thwart their efforts. It murdered most of the Kree because they were at a genetic dead-end, hoping to jumpstart the survivors evolution, and the Lunatic Legion could throw his plans into disarray if they were to succeed.

On Earth, Iron Man visits Carol Danvers out of concern for her abrupt departure following a recent mission. Though he is trying to be nice, after revealing his true identity to her, he remarks on her drinking habits which causes Carol to ask him to leave, lest he be thrown out physically. Tony reluctantly departs and along with his assistant Pepper Potts, he visits an old company of his called Powersource Inc. Having received a mysterious message from there he wants to locate its source. The boss, Victoria Snow is friendly enough but doesn’t reveal anything about the company’s business. Suddenly, Warbird comes crashing through the window, drunk, and threatens Tony. Just as she realizes her mistake, three members of the Lunatic Legion enter and a battle erupts. Soon Kree Sentry #571 arrives and joins the battle, keeping the two Avengers busy long enough for the Lunatic Legion to departed with a power plant that Powersource had built for them. As it turns out, Victoria Snow had made a deal with them, as the company was in danger of bankruptcy and needed the money. During the battle with the Sentry Warbird’s powers fade but Iron Man manages to destroy it. While he helps rescue innocent employees from the debris caused by the fight, Warbird impetuously goes after the Kree, against Avengers standard procedure.

Captain America meanwhile continues to fight crime in New York City and is speaking to Congress hopeful Andrew Bolt, whose premises have just been destroyed by arsonists, when he receives a call from Warbird who has followed the Lunatic Legion to an abandoned missile silo near Cape Canaveral. 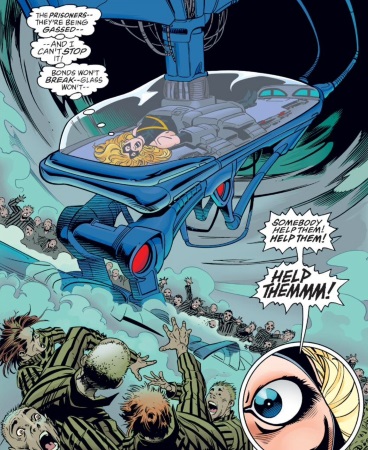 She is in trouble and asks Cap for help, telling him she’s called the other Avengers for backup. While Cap is on his way, Warbird is captured by the Kree and placed in a contraption which holds her as dozens of human prisoners are gassed by an experimental gas which the Kree hope to use against the population of Earth. The gas includes Terrigen Mists which the legion have stolen from the Inhumans. Luckily for them, Cap arrives and releases Carol before herding the prisoners to safety. Carol informs him of what she knows of the Kree’s plan before more Kree soldiers attack them. As Warbird tackles the foot soldiers, Cap takes on a bruiser called Bron Char who knocks him into a large room where human bodies litter the floor. This acts as a catalyst for Cap who proceeds to take Bron Char out. While Cap heads back to the prisoners in order to ensure their safety, Warbird tells him that the Lunatic Legion are heading for their rocket. Cap says that the humans are their priority but Warbird heads off after the Kree regardless, a second breach of procedure. Overeager to prove herself she walks into a trap and is captured a second time. Cap helplessly watches the Kree’s rocket depart for the moon, Carol aboard.

Shortly after, Cap informs Wanda of the situation and when her brother Quicksilver returns a Quinjet he had borrowed, the siblings, as well as Hawkeye are teleported to the Moon by the Inhuman dog, Lockjaw. Once there, they find the Supreme Intelligence who provides them with just enough information to let them know what the Lunatic Legion have planned. Pietro immediately goes to rescue Warbird and after doing so, places her in a room for her own safety as she is still a little inebriated. Unfortunately, once he has gone, she takes a drink of what appears to be Kree alcohol and becomes drunk, very drunk once again. Hawkeye and the Scarlet Witch enter the control room from where the omni-wave projector, the weapon that will be used against Earth will be operated from. They battle some Kree troops and make short work of them, allowing Lockjaw to grab the cylinder containing the Terrigen Mists, which was to stolen from the Inhumans and needed as part of the machine. Quicksilver arrives just as Wanda summons Wonder Man to cover their escape, and moments later, the Avengers find the generator that empowers the weapon, though it’s guarded by more troops. Warbird appears and in her drunken state, manages to blast aimlessly, destroying the generator but also catching Lockjaw by mistake, injuring him. Quicksilver is forced to asks Lockjaw to get them back to Earth where he tells Carol she will answer for her actions. 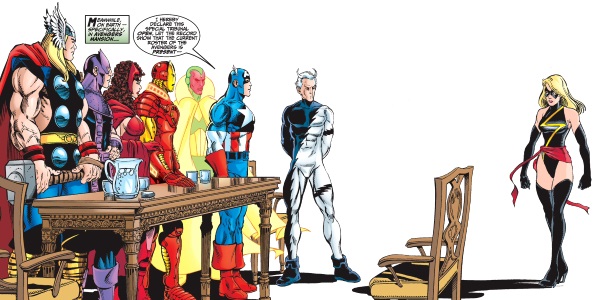 In Avengers mansion, the Avengers court martial Warbird for her recent actions. With the proceedings being chaired by Thor, Iron Man tells them of Carol’s reluctance to admit her drinking problem. Captain America mentions her recent power loss and her decision not to tell her team-mates about it, though as team leader he needs to know when making decisions himself in the field. Both then describe Warbird’s recent actions, both at Powersource Inc. and at Cape Canaveral, as in both incidents she ignored standard Avengers procedure and did not care about the innocent bystanders. Quicksilver adds to the prosecuting evidence by testifying about the event on the moon. Warbird’s denies to have any problems with alcohol, and it is clear that she is about to be demoted from the active roster, but before the decision is made, an incoming message alerts the Avengers that the Legion are still a threat to Earth. All prepare to leave, including Warbird, but Captain America tells her to stay back, causing her to angrily quit the team and leave the mansion, while the Avengers, including reservists Firestar and Justice board the Space Quinjet.

On the Moon, the Lunatic Legion are indeed going through with their plan. Admiral Galen Kor tells his soldiers that despite their generator being destroyed, they can still use the weapon as enough Terrigen Mists had been placed in the omni-wave projector before they were taken and they can power the weapon with their own lives. Once the Avengers arrive, the Kree soldiers keep them buy for Galen Kor to make final preparations, and one by one the Kree transform into energy for the projector to use. The Avengers are surprised when their opponents begin to dematerialize, a phenomenon which Iron Man correctly deduces means they are being converted into energy. They hurry into the main chamber of the omni-projector.

Down on Earth, Warbird attempts to prove her worth by heading to the Moon herself and show her former teammates them what they will be missing. She pushes as hard as she can, but at one point the air gets to thin and Warbird falls back to Earth, desperate for a drink. 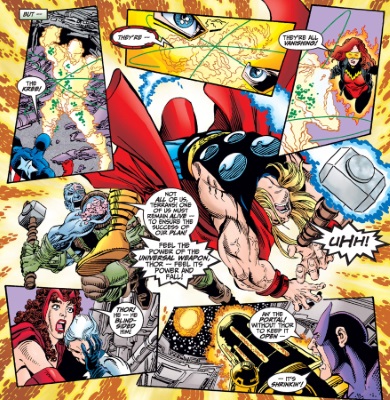 Thor attempts to open a dimensional portal through which the weapon can be pushed but as he opens it, Galen Kor attacks him and the weapon powers up, ready for use. Knocked unconscious, Thor can no longer sustain the portal. As it begins to shrink, Justice realizes that their only hope lies with Firestar and he urges her to juice up the portal up, despite the potential health problems such outburst can cause her.
She reluctantly agrees to do this, just as Galen Kor, the last of the Kree, converts himself into energy, but before the weapon is to be fired, Justice uses his telekinesis to shove the weapon through the portal and it explodes harmlessly on the other side.

With Earth now saved yet again, S.H.I.E.L.D agents and Starcore staff head to the Moon to take charge of the site and indeed, look after the Supreme Intelligence, the secret originator of the Vision’s call for help. The Supreme intelligence is happy that the Legion’s plans have been thwarted and he now has people to look after him and to converse with, while he has all the time to await the Kree’s evolution. Carol meanwhile sits in a bar, realizing that the Avengers didn’t need her. She looks at a drink and considers her future.