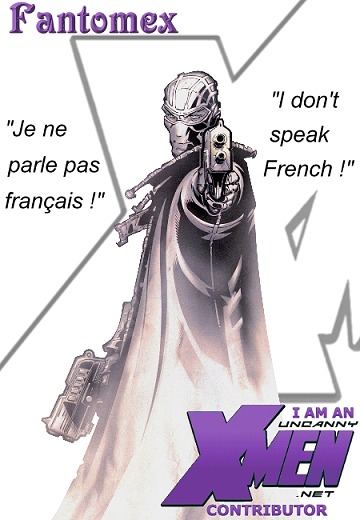 In the brief:
I came across this site when looking for issue summaries on the net. With thousands of comics I will never own, I scoured the net for synopses that were full enough to make sense. UXN had them, and in abundance. I used to read them and think that, as I have plenty of spare time (no wife at the time, no kids, no pets), I could contribute something to the site. I knew I wasn't exactly well read, and my English isn't the greatest, but I reckoned I could make sense of an issue and relate it to someone else who hadn't read it. I was asked to write a test issue, which was Uncanny X-Men #355, and was taken on from there. Since then, I have written up all kinds of issues such as Quicksilver, Domino, Marvel Comics Presents and plenty of Uncanny X-Men back issues, and I currently summarize three quite different series.

History:
I hail from Dewsbury, West Yorkshire, but since my twenties I've led a fairly nomadic existence, changing jobs over a dozen times. My favorite job was based in Huddersfield, delivering cars around the United Kingdom. Waking up on a morning, driving a top of the range Mercedes to Ireland and bringing a Land Rover Discovery back and getting paid for it, was more of a hobby than a job. Unfortunately, I crashed a BMW and was shown the door which happened to be lying several yards from the actual car. From there I moved to the beautiful city of York. After a year there working in an Oxfam bookshop and playing Tomb Raider II, I moved to Ossett, living in the town center and then to Leeds where I found a job in the city center. I buy most of my comics at OK Comics off Briggate.

My comic book reading began in my early teens. My comics of choice were Sgt. Fury, Rom, Captain America and the Avengers, mainly because that's all I could get hold of. I had a loooong break from starting high school aged 12 to picking up the Onslaught titles in my late twenties. I'm Marvel through and through, though lately I've strayed to titles like the excellent Ex Machina. I am fairly continuity conscious, but don't let it ruin my day if something's not quite right. My all-time favorite series is the third Inhumans series, drawn by Jae Lee. Other enjoyable issues include Uncanny X-Men #303, the Kevin Smith Daredevil arc and the Hidden Years ending where Warrens mom dies. I'm not religious in any way, but I had a little cry at that. Of course, these days the Runaways rule.

I love to travel, and have holidayed all around Great Britain, in France, Germany, Spain, Ibiza, Majorca and more recently America, visiting San Francisco, New York, Chicago, Vegas and San Diego amongst other places. I proposed to my girlfriend at the Grand Canyon and we honeymooned in sunny Cuba. The nice bits of America are just outstanding. Vegas, San Francisco and Los Angeles are definitely on the cards for a return trip. If I had the choice, I'd move in an instant, and live in Russian Hill like the characters in Amistead Maupins Tales from the City. With my wife I've been to London many times, the Dales, the Peaks, Northumberland and many other places. She likes to keep me busy. Ambitions for the future? None really, only to enjoy what I'm doing and who I'm doing it with.

Favorite lines:
There can’t be that many people who can describe themselves as being monosyllabic!