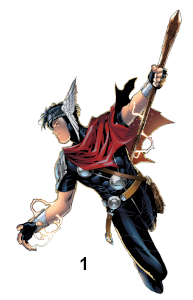 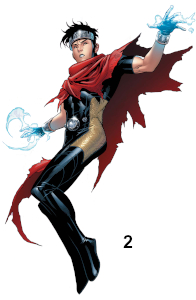 1) Billy's first costumed identity as the Asgardian deliberately tried to evoke Thor's look. He wore a blue body suit with three metal discs on the chest piece. His boots, gloves, and epaulets were of ornate design, made to look "Asgardian." His headband had a pair of feathered wings attached to resemble Thor's helmet. He wore a torn red poncho, belt and satchel bag. Finally, he carried a wooden staff which was apparently strictly ornamental, although at first it appeared as if he were using it to cast his spells. [Young Avengers (1st series) #1]

2) As Wiccan, Billy removed some of the more ostentatious Asgardian pieces of his first costume, such as the helmet wings and chest discs. For the most part, though, his costume was still largely the same. He also stopped wielding his staff, except on rare occasions. [Young Avengers (1st 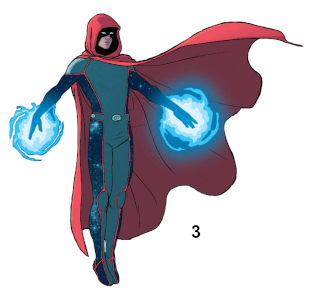 3) Wiccan altered his costume, wearing a light off-blue with a starry space design running the lengths of his sides and his arms, with red lining tracing most of the suit. His red cape now came with a hood, hiding his face but leaving his now glowing eyes visible. [Young Avengers (2nd series) #5]