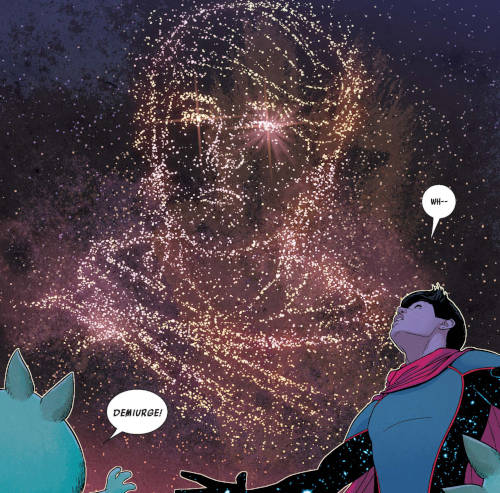 In one, seemingly perfect version of reality, Billy Kaplan evolved to become the Demiurge, gaining ultimate power as the embodiment of magic forwards and backwards in time. He established the Utopian Parallel, a unique version of Earth blessed with peace and prosperity by his God-like oversight. Those born in the Utopian Parallel, like America Chavez, had vast personal power apparently as a side effect of his largess.

Earth A was a timeline visited by the Fantastic Four on occasion which lacked many of the modern Marvels that defined Earth-616. Two men named Albert DeVoor from Earths-A and 616 arranged for an inter-dimensional tourism business, allowing A-people to travel through A-holes and visit a universe where anything could happen. Lucky tourists whose Earth-616 counterparts had super-powers could also be modified in transition to possess the same powers as their doppelgangers once they arrived. This led to a comedy of errors when many Earth-A doppelgangers would appear on Earth-616 in anachronistic costumes, after their counterparts were dead, and generally behaved in ways that seemed to defy continuity. Wiccan and Hulkling were surprised to discover their Earth-A counterparts signed up for the Initiative and joined the army without their knowledge.

In Battle of the Atom, a future version of the X-Men was depicted operating out of the Jean Grey School. Wiccan appeared not only as an X-Man but also as the Sorcerer Supreme, wielding the 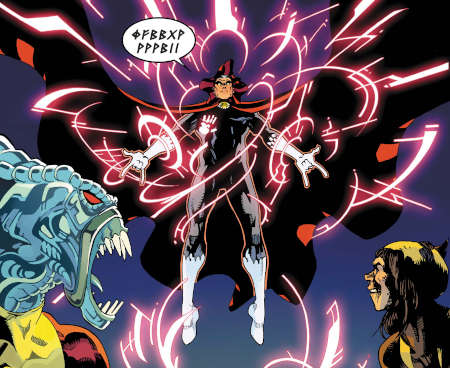 Eye of Agamotto and the Cloak of... Cloak. In apparently the same timeline, Wiccan made a deal with Valeria Richards, now Doctor Doom and Queen of Hell. In order to save his fellow X-Men from the Brood, Wiccan received a fatal curse known as the Mark of Sorrow. He was searching for a way to end that curse when he was recruited by Merlyn to join a gathering of Sorcerer Supremes from throughout time to deal with the threat of the Forgotten. The present day Doctor Strange taught Wiccan to manage the Mark for a time, but the Supremes eventually returned to Wiccan's time to help cure him. Wiccan regained control of his powers and defeated Doctor Doom, removing the Mark of Sorrow and reuniting with Teddy and their son.

In the Last Avengers Story timeline, Scarlet Witch died in an accident when Quicksilver crashed 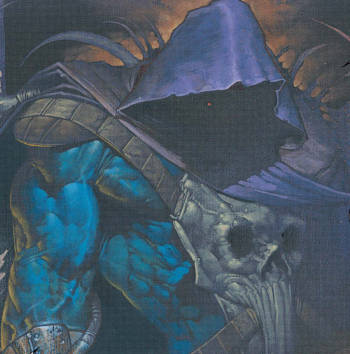 into the hyper-dense Vision, pulping his sister between the two of them. A grieving Vision fled from mankind and his sons, his molecules drifting apart on the breeze. Billy and Tommy Maximoff grew apart as they got older. When Tommy went off to study the mystical arts with Doctor Strange, Billy irrationally felt abandoned and turned to darker studies to explore his own magical potential. In time, he became the super-villain known as Grim Reaper, patterned after his evil uncle Eric. He and his partner Oddball joined forces with Ultron-59 and Kang the Conqueror to lash out at the modern Avengers franchise and the lingering members of the old team who were still alive.

In one timeline, Iron Lad continued on as a member of the Young Avengers but embraced his identity as Kang. The "Young" Avengers grew up to believe the ends justified the means, 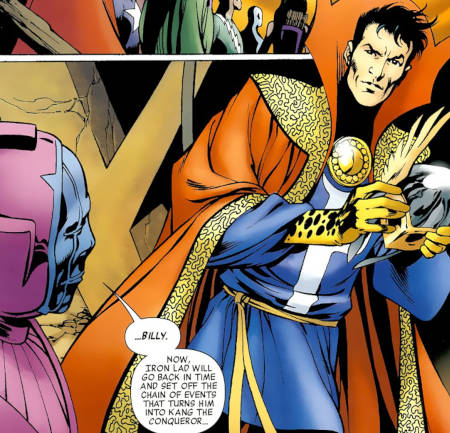 becoming a rogue group of Avengers hunting down and eliminating threats like the Brotherhood of the Badoon. William Kaplan grew up to claim the Eye of Agamotto and apparently became Sorcerer Supreme. When they met the young Iron Lad, these Avengers pretended Billy had been killed by Wolverine back during his search for the Scarlet Witch, prompting Nathaniel to travel back in time in order to save him, putting Iron Lad on the path to becoming Kang. 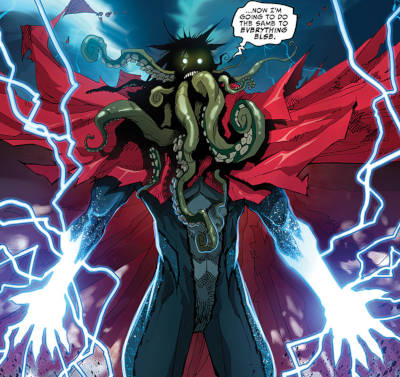 In the future year 20XX, Billy Kaplan was a member of the A.V.E.N.G.E.R.S. Initiative known as Demiurge. In the original timeline, Demiurge had been infested by Mor-I-Dun of the Fifth Cosmos decades earlier, and the Lovecraftian parasite slowly ate his soul from within. Demiurge, under Mor-I-Dun's control, attacked the Avengers and his husband, King Hulk. Billy killed several Avengers before the remaining team fled back in time to stop the rise of Mor-I-Dun. They were successful in ridding Billy Kaplan of Mor-I-Dun in the past before it was too late, leading to a new future where King Hulk and Demiurge were still happily and healthily married.

In the original House of M reality, the Scarlet Witch created a world where her sons were alive and her father Magneto had introduced mutant dominance of the world. Wanda was the reclusive and allegedly human daughter of the House of M, however, and not much information was givenon this world's pre-adolescent version of her sons, even their names or father. On Battleworld, the House of M reality was recreated as part of God Doom's domain. Thomas and William appeared as teenagers in this realm, patterned after their Wiccan and Speed identities from the main reality. The rebellious princes made showings of civil disobedience in defense of human rights being equal to mutants. Whenever they were caught, their mother or grandfather made sure they receiving no more than a scolding and were immune to prosecution by S.H.I.E.L.D.