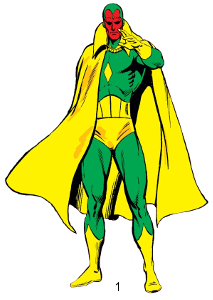 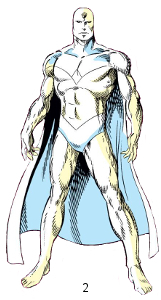 1) The Vision originally wore a green bodysuit covering him from the neck down with a cowl over his head that left his face exposed. He wore yellow gloves, boots, trunks and an additional yellow band around his lower chest, with a yellow diamond in the center. The diamond also connected to his yellow cape with an opera-style high collar. Vision has an apple-red skin tone that complements his costumes. [Avengers (1st series) #57]

2) Upon his disassembly, Vision's skin was traumatized and bleached of all color. He wore only minimalist attire during this time, somewhat obscured by his clothing being the same unearthly white of his skin. He was clad in simple briefs and a small shoulder dressing connected to his cape, with a white diamond again on his chest. [West Coast Avengers (2nd series) #45] 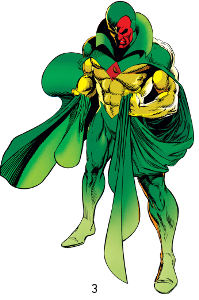 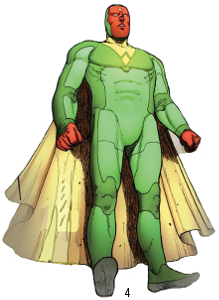 3) After being permanently relocated into the body of his Anti-Vision doppelganger, Vision returned to a slightly altered version of his original colors and costume. Vision now had a full seamless body suit instead of individualized gloves and boots. His lower body was colored green while the upper body and arms were yellow. A red diamond on his chest separated the yellow from the uppermost part of his chest and neck, colored green like his cape and cowl. [Avengers (1st series) #360]

--) When his Anti-Vision body was seriously damaged by Morgan le Fay, Vision had himself rebuilt back into his original costume design. [Avengers (3rd series) #12]

4) With the Robot Avengers, Vision switched to a two-toned green and lighter green costume. He left his red hands exposed like his face and maintained the diamond on his chest connecting to his cape, all colored yellow this time. [Avengers A.I. #1]

5) Recently, Vision has changed to another costume deviating from his original design. This uniform is a complicated mix of colors and pieces that, unfortunately, isn't always consistent from one artist to the next. It is typically green at the core, with a green hood, collar and cape. Red is the secondary color used in the uniform, frequently around his chest and arms, while additional trimmings appear on the costume in yellow. [Uncanny Avengers (2nd series) #1]