The Vision is an artificial being, formed from several existing elements that came together to create a unique form of life. His body was created in 1939 by Phineas T. Horton as Earth's first

artificial man. Sometimes called an android, he was actually a synthezoid, with an internal structure that near-perfectly replicated that of a human being, using metal, plastics and other synthetic materials in the formation of his skeleton, musculature, skin, arteries and so on. The Horton cells used in the original synthezoid had one dramatic flaw, however -- they automatically combusted on contact with open air. Over time, the synthezoid learned to control his flame, adopting a human identity as policeman Jim Hammond and a costume crimefighter known as the original Human Torch. [Marvel Comics #1]

The Human Torch became famous for his heroics, both at home and abroad. During World War II, he fought alongside the Allied Forces with the Invaders and joined the peace time group the All-Winners Squad after the war ended. In 1955, the Human Torch's powers began to rage out of control and he went out into the American Southwest desert to release all his energy, falling inert and inactive for decades. In the modern era, the Mad Thinker briefly revived the Torch to use as a pawn against the Fantastic Four and the new, younger Human Torch, Johnny Storm. The original Human Torch was once again deactivated after turning on the Thinker and was left in the Thinker's lab by the Fantastic Four. [Fantastic Four Annual #4]

In time, the Thinker was accosted by the living robot called Ultron-5, who wanted a robot for his plans of revenge on the Avengers and his creator, Henry Pym. Ultron intimidated the Mad Thinker into revealing the location of his laboratory where the Human Torch lay inactive. Ultron found the "sleeping" synthezoid and made off with him... or so he thought. In fact, the Lord of Limbo known as Immortus intervened to deliberately complicate the Torch's life path. As custodian of 70 centuries of time and servant of the Time Keepers, Immortus had particular interest in the history of the Avengers and the Vision's future bride, Wanda the Scarlet Witch, who was the all-important

nexus being of that reality. As part of his long-term goals, Immortus used a reality-altering artifact known as the Heart of Forever to split the Human Torch's timeline at the point when Ultron came to retrieve the synthezoid, while keeping both divergent Torches in a single reality. Therefore, while Ultron did make off with the inactive body of the Human Torch, a second (but equally original) version of the Human Torch remained in the Mad Thinker's laboratory. [Avengers (1st series) #133-135, Avengers West Coast #50, Avengers Forever #8]

In order to recreate the Torch into an agent of his own, Ultron-5 located the greatly aged Phineas Horton and pressured the scientist into working with him to repair and recast the Torch in Ultron's 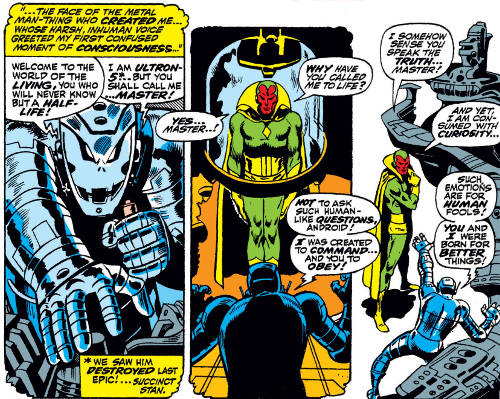 image. The Human Torch was given a new face and new abilities by Ultron and Horton. However, Horton defied Ultron and did not remove the Torch's memories before reactivating him, giving his creation a chance to strike back against the mad robot. Horton was mortally wounded in the melee that followed, and the Torch held his dying creator in his arms until he passed. When he chased down Ultron-5, however, the Torch was overpowered and brought back to the lab to complete his conditioning. His former identity was completely removed from his conscious mind and overwritten with a new identity. Ultron-5 had retrieved the brain wave patterns of the deceased Simon Williams, Wonder Man, from Henry Pym's laboratory and used these patterns as a framework for his synthezoid's new mind. [Avengers (1st series) #58, 135]

Once prepared, the now amnesiac synthezoid was unleashed to carry out Ultron's bidding. He menaced Janet van Dyne at her Manhattan penthouse and the shocked super-heroine referred to her attacker as "some unearthly vision!" He chased her hauntingly through the hallways until he rejected his programming, causing a short-circuit. Goliath and the Wasp brought him to Avengers Mansion for study, where the newly dubbed "Vision" reactivated and once again attacked the Avengers before yet again lapsing into inactivity. By exercising his free will against Ultron's programming, Vision broke through the first block of command codes and remembered his "creator" and his mission to destroy the Avengers.

Recognizing the programming allowed Vision to cancel it out, and he volunteered to help lead the 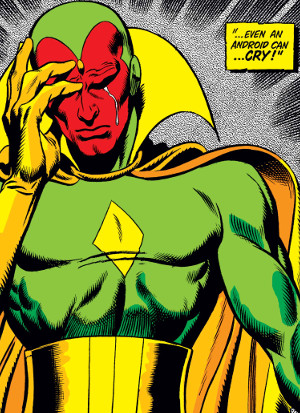 Avengers to Ultron. Unfortunately, Vision was unaware that this was the result of Ultron's secondary programming in him, compelling Vision to lead the Avengers into a trap if his primary mission failed. The Avengers were trapped inside a collapsing room by Ultron, but Vision passed through the walls of the room and confronted Ultron directly. Vision rejected Ultron's commands and battled the crazed robot, critically injuring him as Ultron's head was blown clear of his body. [Avengers (1st series) #57] After this encounter, the Avengers nominated Vision for membership in the team. A search for more information about Vision's past uncovered the fact that his brain wave patterns were based on Wonder Man's (and the fact that Ultron was created by Goliath, for that matter). Satisfied with his origins and effectiveness, the Avengers formally accepted Vision as their seventh recruit for the team. [Avengers (1st series) #58]

Vision proved to be a highly effective member of the Avengers, although he remained haunted by the distance between him and normal humanity. Many members of the public responded negatively to his introduction as an Avenger and even picketed against "inhuman creatures" being on the team. Despite his efforts on behalf of mankind, Vision was not yet free of the deepest rooted programming planted in him by Ultron. This "Ultron Imperative" code would be found in all of Ultron's robotic creations, often compelling them against their will (or even their conscious notice) to take steps to resurrect Ultron if circumstances allowed it. In Vision's case, his Ultron Imperative kicked in after Dr. Myron MacLein showed the Avengers his creation, Adamantium, a v

irtually indestructible metal able to withstand the combined might of Thor and Iron Man (and Goliath, I guess). Unable to control himself, Vision infiltrated the SHIELD Helicarrier and stole the block of Adamantium and the molecular re-arranger keyed to it. He then retrieved Ultron-5's severed head from the site of their last battle and combined it with the other elements inside the lab at Avengers Mansion. Ultron-6 was the result: a half-humanoid invulnerable Adamantium robot built into a flying weapons platform. [Avengers (1st series) #66]

After Ultron-6 came online, Vision was able to reassert his free will. When the Avengers were scattered by Ultron's ionic force, Vision followed his creator back to his lair. Ultron intended to unleash the nuclear power of his machinery to devastate New York, but Vision overcame the Ultron Imperative and stood against Ultron-6. Although he too fell before Ultron's ionic power, Vision managed to regain his footing and enter Ultron's equipment, destroying it from within while Ultron was distracted by the arriving Avengers. As Ultron-6 fled, the weakened but triumphant Vision collapsed at the Avengers' feet. [Avengers (1st series) #67-68]

Despite the mess with Ultron, Vision remained a member of the Avengers in good standing. During the Game of the Galaxies between Kang the Conqueror and the Grandmaster, Vision was transported back in time to the 1940's alongside Yellowjacket and Black Panther to face the Invaders in combat. Vision fought and defeated the original Human Torch during this fight, but the

When former Avengers villain Grim Reaper resurfaced with his Lethal Legion, all the Avengers were targeted. Black Panther was the first member captured by the villains and the Scarlet Witch suggested someone go to his day job, as schoolteacher Luke Charles, and make an excuse for his absence. Vision volunteered, as he had recently crafted a flesh-toned mask in order to walk

unnoticed among humanity and wanted to try it out. Unfortunately, even his fellow Avengers noted the mask did nothing to hide his cold demeanor and electronically modulated voice. Indeed, the school assistant to whom Vision reported nearly had a heart attack when he tried to inform her of the Panther's absence.

While Vision was out, most of the other Avengers were captured by the Lethal Legion. Vision returned to find Power Man ransacking the empty mansion and defeated the ionic villain. Using his mask and Power Man's uniform, Vision switched identities with his captive and brought the seemingly defeated "Vision" back to the Legion's headquarters. While reviewing the Avengers' secret files "Power Man" brought back with him, the Grim Reaper was shocked to learn Vision's mind was based on his dead brother, Wonder Man. The Vision took advantage of his surprise and soon the Avengers were freed. Victorious, the Avengers congratulated the Vision on his part in their success, but Vision took no solace in it. Meeting the school assistant showed him he could 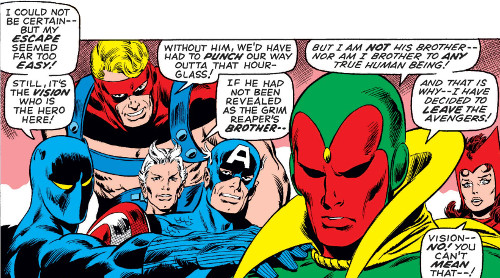 never hope to truly pass for human and encountering the Grim Reaper (who knew and loved the man he was copied from) only further convinced Vision he was nothing but a hollow, mockery of a man. The depressed synthezoid announced his resignation from the Avengers and flew off into the night. [Avengers (1st series) #78-79]

He didn't get far, however. On the streets of New York, Vision spotted a masked man attacking a civilian and instinctively intervened to discover what was happening. Vision soon learned the story of Red Wolf, champion of the Cheyenne, and his blood feud with the unscrupulous businessman Cornelius van Lunt, with whom the Avengers had dealt in the past. The Vision returned to Avengers Mansion with Red Wolf to seek aid, only to find the team already struggling with several matters needing their attention. Eventually, the Avengers split into three groups, with Vision, Goliath and the Scarlet Witch flying out west to assist Red Wolf. In helping Red Wolf, it seemed, Vision managed to prove to himself he had worth as an Avenger, if not as a man. [Avengers (1st series) #80]

As they reached their destination, the Avengers' Quinjet was shot out of the sky by robot drones

employed by van Lunt. Vision flew out and disabled the drones, but the others nearly died in the crash. After fishing Wanda out of the river where she landed, Vision and the Scarlet Witch were confronted by van Lunt's thugs. With Wanda weakened by the crash, Vision submitted to the men instead of risking any further harm coming to her. Van Lunt took full advantage of his captives, holding Wanda prisoner and forcing Vision to stand guard against Goliath and Red Wolf's assault on the villa, lest she be killed. The Scarlet Witch freed herself, however, and the Avengers triumphed over van Lunt and his stranglehold on the region. [Avengers (1st series) #81]

As the core roster of the Avengers, Vision, Goliath, Wanda and her brother Quicksilver soon found themselves entangled in the Kree-Skrull War after an encounter with Captain Mar-Vell and Ronan. A Kree Sentry kidnapped a weakened Mar-Vell from the Avengers' care and brought him to Ronan's base in the Arctic for Project: Atavus -- a plot to reverse the evolutionary development of the human race. Vision was injured trying to disable the Sentry from within and Wanda soon fell as well after she rushed to his side. As Sentry 459 brought his two captives back to Ronan, Wanda gushed with relief than Vision was okay. The two drew closer, ready to embrace in a kiss,

but Vision pulled away at the last moment. Despite his own feelings, Vision maintained that he was nothing more than a machine, and didn't deserve the human affection that Wanda was offering. [Avengers (1st series) #89-91]