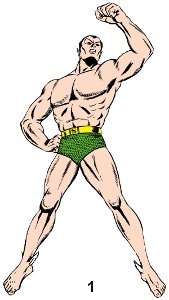 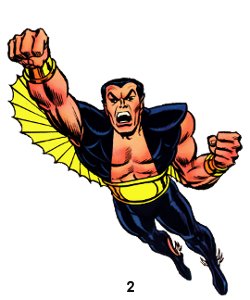 1) The Sub-Mariner traditionally appears dressed in nothing more than a pair of bathing trunks. In the Golden Age, these trunks could be brown, blue, or black, but by the Marvel Age of Comics they settled on green trunks, often detailed like fish scales. A golden belt sits atop the trunks, occasionally sporting a sea shell or stylized 'S' at the buckle. [Marvel Comics #1]

2) When nerve gas removed Namor's ability to remain properly hydrated on land, Reed Richards designed a moisture suit to keep him properly saturated above the waves. Also representing a turn towards a darker, "Savage Sub-Mariner", this costume was made of jet black leggings and a vest leaving his neck and chest exposed. A large golden belt extended around his waist, accented by gold wrist bands. For some reason, it also had gold-colored "wings" expanding under his arms. [Sub-Mariner (1st series) #67] 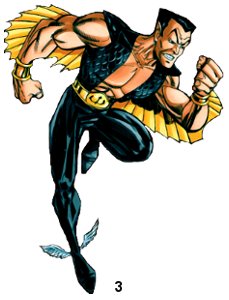 3) After Lord Neptune blessed his mission to restore the fallen Atlanteans, the God of the Oceans imprinted the symbol of his Trident on Namor's buckle. Namor has returned to versions of this suit many times over the years, making it one of his traditional two attires along with the green trunks. Later versions have included a black fish-scale variant to the tunic. [Sub-Mariner (1st series) #68]

4) While undercover during Atlantis Attacks, Namor adopted a full suit of armor as a disguise. This darkened red armor included flaired boots and gauntlets as well as enlarged epaulets on the shoulders. The helmet completely covered his head and had an elaborate set of curved spikes extending from his forebrow. [Avengers Annual #18]

--) Once he resurfaced in the public eye, Namor returned to his traditional green trunks. 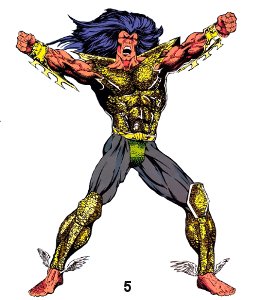 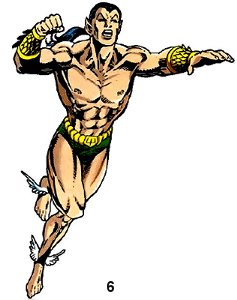 5) In conflict with Suma-Ket and the Unforgiven Dead, Namor was direly injured. Lord Neptune arose to bless his journey once again, providing Namor with the healing armor of his ancestor Kalen. His trunks were now worn over a black body suit which covered him from the neck down. Namor wore a chestplate of extremely elaborate gold design, with fierce spikes extending from his shoulders. He wore similarly elaborate and spiky gold gauntlets and spiked adornments on his legs. All this complimented the longer, wilder hair he had grown as "Rex". [Namor, the Sub-Mariner #37]

6) When his injuries had healed, Namor retired the Sacred Armor of Atlantis. He returned to his green trunks, often wearing golden bracelets around his wrists as well. Namor also wore his hair in a long ponytail during this period. [Namor, the Sub-Mariner #42] 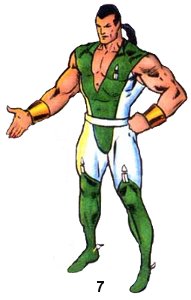 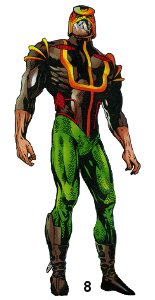 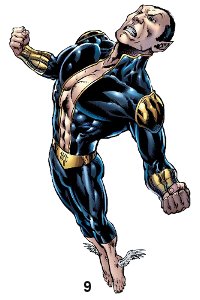 7) Namor joined Walter and Diane Newell in forming an underwater research colony called Hydropolis, and frequently wore the standard attire of the colony. Namor wore a green tunic and leggings over a white bodysuit. The symbol of Hydropolis, a hemisphere over two rectangles, was found on his breast and upper legs. Namor modified the Hydropolis suit for himself, discarding the white undershirt to keep his chest and arms bare and often removing the full boots to let his wings be free. [Namor, the Sub-Mariner #46]

8) When he first returned from the Heroes Reborn universe, Namor lost his ability to breathe underwater, and was forced to adopt a special diving suit to return to Atlantis. The black tunic had a golden three pronged symbol covering the front, resembling the Trident of Neptune. Three golden frills also covered the shoulders. Striped red patterns also appeared on the suit, apparently part of the oxygen-filtrated system. The lower suit was a set of leggings in green scales like Namor's trunks, ending in a pair of boots. The gold mask had a clear faceplate to provide him with oxygen. [Marvel Team-Up (2nd series) #9]

--) Namor returned to his traditional green trunks after regaining his aquatic abilities. While under the Curse of Yandroth, the Defenders changed into darker versions of themselves. Namor represented this change by reassuming his black moisture suit from his "Savage Sub-Mariner" days.

9) The Sub-Mariner began wearing stylized variations on the moisture suit design. These more authoritative garments included golden wrist bands and leg braces along with his trident belt. They also had golden shoulder plates and only a thin open line down the chest, showing off much less of the royal abs. Namor also incorporated this basic design into a suit of form-fitting Atlantean armor. [Sub-Mariner (2nd series) #1] 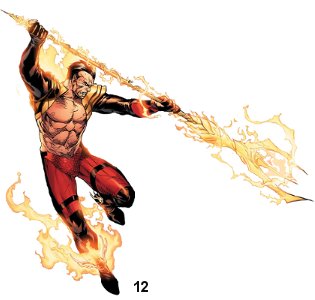 10) Namor adopted a new costume when he began working with the X-Men teams. Based on his moisture suit, this sleeveless black suit had strips of blue scales running down the inside of his chest. He wore silver wristbands and a classic X-Men belt, yellow with a red and black 'X' on the buckle. It also had a raised collar. [Uncanny X-Men (1st series) #513]

11) As a member of the Extinction Team, Namor's X-Men costume was slightly modified. The now-turquoise scales extended down his inner legs, while the red was removed from his belt. An additional 'X' design was added to the inside and outside of his boots. [Uncanny X-Men (2nd series) #1]

12) As one of the Phoenix Five, Namor's costume switched to a Dark Phoenix color scheme. He wore a golden armor that left his chest exposed but covered his shoulders and backside. Black and red sleeves extended down his arms from the armored chestplate. His slacks were predominantly red, including fish scale briefs reminiscent of his traditional green trunks. Black trimming and highlights also covered his leggings and formed his boots. [Avengers vs. X-Men #5]

--) Since leaving the X-Men, Namor wore several variants of his previous costumes, including the moisture suit design and his X-Men costumes with the 'X' identifiers removed.

13) While assisting Jean Grey with her new X-Men unit at Searebro, Namor adopted a variant for the team’s uniform designed to prevent infection by Cassandra Nova’s Sentinites. A sleeveless costume in shades of green, it had scale-like portions reminiscent of his traditional briefs. Namor also wore fingerless gloves and a large ‘X’ insignia on his abdomen. [X-Men: Red (1st series) #1]

14) Namor’s war-footing costume includes segmented coral bracers, shoulder armor and leggings. Beneath these he wore blue tights with golden scales on the outside lining, and an Atlantean symbol at his belt. He also wore a necklace of shark teeth. [Avengers (7th series) #8]