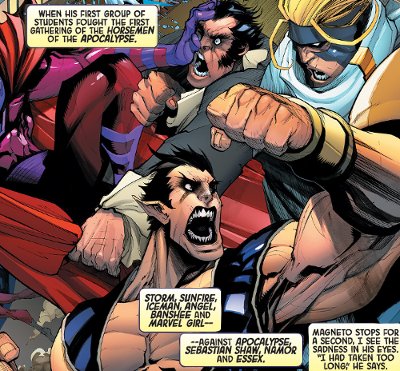 In the original Age of Apocalypse, Namor and Atlantis were destroyed by the Eternal One, to prevent them from challenging his rule.

When the Age of Apocalypse was reincarnated on Battleworld, Namor served a different role. He acted as one of Apocalypse's Horsemen in the early days of his crusade. Namor seemingly died in confrontation with Magneto and the first incarnation of the X-Men.

Ultimate Namor was not a king of Atlantis, but a prisoner. 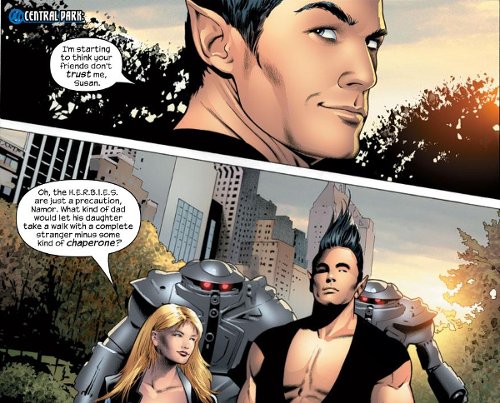 Nine thousand years after the fall of Atlantis, Mary Storm and her research team located the sunken continent with the assistance of the Fantastic Four. Namor was inadvertently freed during their exploration, and taken into custody at the Baxter Building. He only agreed to share the secrets of Atlantis with Sue Storm, much to Reed Richards' chagrin. When Namor's true nature as a convict was translated from his "tomb", a fight broke out between him and the Fantastic Four. Reed later blamed Namor for the Ultimatum Wave that drowned Manhattan, but their conflict was interrupted by Victor van Damme. Namor was imprisoned in Latveria for a time before eventually being freed.

In Earth X, an alliance between Doctor Doom and the Sub-Mariner was responsible for the death of the Human Torch. 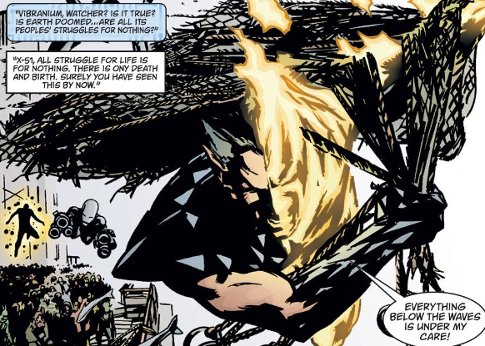 In his rage, Franklin Richards turned his power on Namor, causing half of the sea-king's body to burst into flames and remain burning for the rest of his life. Sue Storm and Doom also died in the same conflict, furthering Namor's lifelong guilt and dishonor. The cursed Namor was forcibly drafted into the Skull's army of slaves. Later, Reed Richards turned the newborn child Mar-Vell over to Namor for protection, knowing that no one would ever expect Richards to reach out to Namor for anything. When Namor delivered Mar-Vell to Richards, he departed before they could bring Susan back to life, as he was too ashamed to face her. 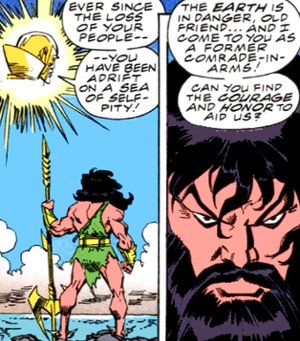 Namor of the MC2 timeline lost his kingdom to an attack staged by Doctor Doom. Namor got his revenge by holding Doom prisoner for years, but Atlantis was still gone. He remained in exile and in mourning until Doctor Strange (now the Ancient One) sought him out to revive the original Defenders once again.

Namora, the Avenging Daughter, was a mutant Atlantean girl who discovered her raw power shortly before Attuma attacked Atlantis. The barbarian murdered Queen Dorma, but Namora defeated him and saved the kingdom. She was named ruler of Atlantis for her heroism. Although she found the surface-dwellers to be an increasing threat, her friends and allies Charles Xavier and Reed Richards convinced her to seek peace with mankind. Magneto's attack on Cape Citadel turned the world irrevocably against mutantkind, however. Xavier and his X-Men were unjustly imprisoned while mutant-hunting "heroes" were ordered by the government to strike against the general mutant populace. Namora and the Atlantean army staged a counter-strike against the surface world. She killed the Avengers and, ultimately, even her former friend Reed Richards and the Fantastic Four to consolidate control over mankind. 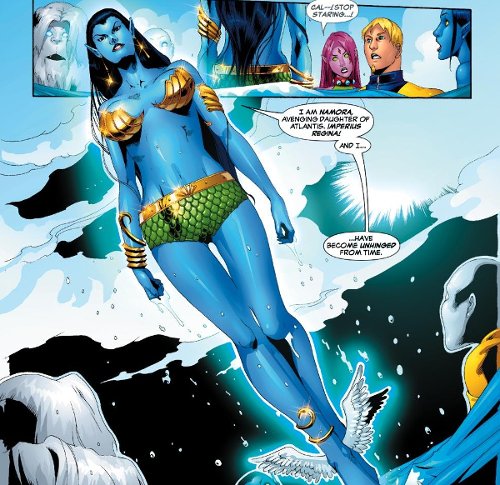 Namora reigned for forty years before becoming unstuck in time and joining the Exiles at the behest of the Timebroker. The queen would not meekly accept her new role, and reached out to the Reed Richards of the first new timeline to end her "servitude" to the Timebroker. Despite the initial chaos this caused, Namora served relatively comfortably with the Exiles over the next few months. When the team finally reached the Crystal Palace, however, Namora's suspicions were confimed when they learned "being unstuck in time" was a lie concocted by the original Timebreakers, who themselves had been surplanted by the evil Hyperion. Namora died in the ensuring battle against Hyperion.

Gambit of the New Exiles was the son of King Namor, an African-Atlantean ruler, and his wife Susan Storm, sole survivor of her team's space flight. 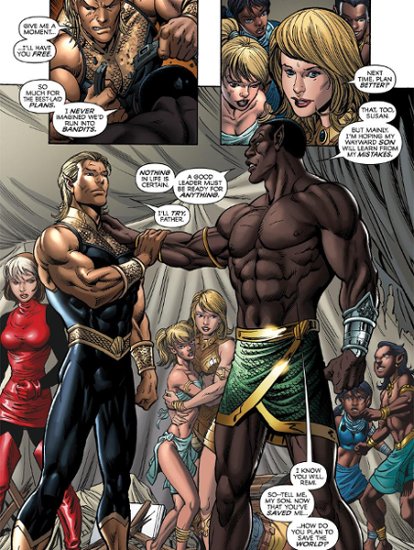 After Susan was modified to live underwater and named queen, Namor and Susan produced many royal offspring including Remi, Valeria Fen, Ariana, Erin and Johnny. In a world where a meteor strike wiped out most of the Atlantic coast, Namor had a major role to play among the world powers. He was exiled into space for a time when the unscrupulous Black Panther cast a force field around the planet. Namor worked with President Amara Aquilla to retake the Earth while operating from space stations and their terraformed colonies on Luna, Hera, Venus, and Mars. King Namor eventually died trying to pierce the force field barrier, however, leading Prince Remy to return from the Exiles and claim his birthright.

When Dormammu killed Eternity and became lord of all creation, he recreated Earth in his image. In this version of reality, Namor was William Everett MacKenzie, a full-blooded human instead of an Atlantean. He oversaw the rebellion against Dormammu on Earth, a unit Dormammu knowingly and mockingly referred to as the "Defenders".

Dormammu enjoyed giving hope and then snatching it away, and so he ensured Bill had full knowledge of the original Defenders and his counterpart when they arrived from the Dark Dimension to undo Dormammu's work. Knowing full well that he essentially wasn't "real", Bill MacKenzie nevertheless was willingly to work to undo his own existence if it meant foiling Dormammu's plans. He worked with the Defenders and Dormammu's treacherous sister Umar to defeat the Dread One and restore the original reality. Bill Everett MacKenzie stood tall and accepted his fate as his reality faded out, giving a final farewell to his twin, Namor. 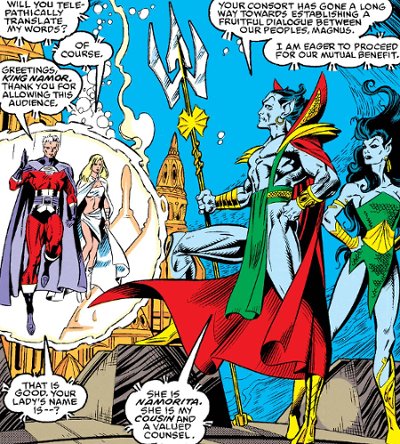 When the Sphinx altered reality to suit her view of history in Forever Begins Yesterday, King Namor and the Atlanteans remained one of the active powers on Earth. With blue skin instead of his traditional Caucasian hue, Namor and his cousin Namorita forged an alliance with Magneto's resistant group, the Mutant Liberation Force, and staged an uprising against the Sphinx's rule across the globe.

In What If? (1st series) #1, the Fantastic Four became the Fantastic Five shortly after their founding thanks to Spider-Man's inclusion, the team's delicate dynamic was upset. 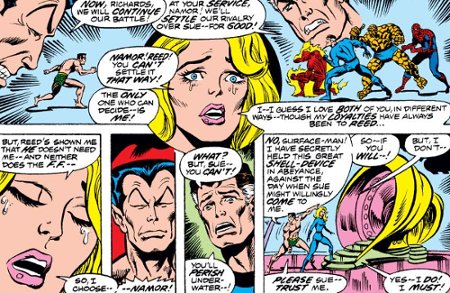 Invisible Girl felt increasingly marginalized as Mr. Fantastic exiled her to the sidelines so that Ben, Johnny, and Spider-Man could fight their enemies. As a result, she turned away from Reed Richards and accepted the more open and giving declarations of love by the Sub-Mariner. Sue Storm left her friends and family to become Queen of Atlantis by Namor's side. The fantastic heroes fell apart without her influence, but Queen Susan remained in Atlantis, altered to become a water-breather like her adopted people. Namor and Sue soon had a son born to them. In one version of this reality, Sue eventually returned to Reed and gave birth to Franklin Richards much as she did in the 616 reality, but how she left Namor and what happened to their child is unrevealed.