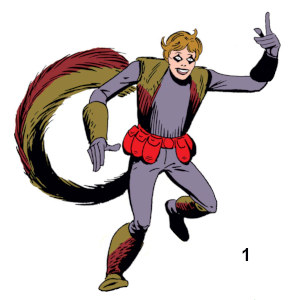 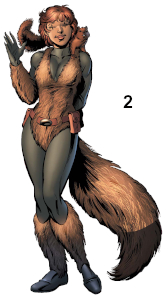 ) Squirrel Girl’s first costume was a gray body suit that covered her from the neck down. It came with brown faux fur arm bands, leggings and an open vest. She also had a utility belt to carry her nut sacks. Although she didn’t wear a mask, she wore black face paint in the shape of four-pointed stars over her eyes. [Marvel Super-Heroes (2nd series) #8]

2) After growing into her career as a hero, Squirrel Girl wore a more fitted costume. This included a faux brown fur one-piece worn over a gray body stocking that covered her from the neck down. She had bands of fur around her forearms and shins as well. Her utility belt and nut sacks were woven through the belt of the costume. [G.L.A. #1] 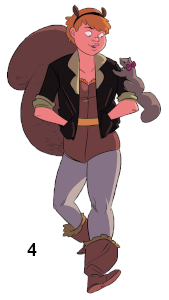 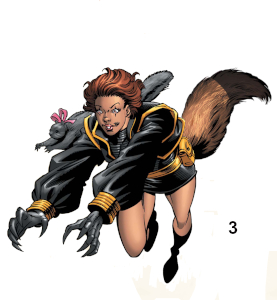 3) When they learned every active member was a mutant (and received a cease-and-desist letter regarding the Avengers trademark), the Great Lakes X-Men were born! Squirrel Girl and the team received matching leather team uniforms that were totally not derivative of Grant Morrison’s New X-Men. Sadly, the leather costumes themselves were another plot by Leather Boy and had to be quickly retired. [G.L.A. #4]

4) Upon started classes at ESU as an independent hero, Squirrel Girl began wearing a more casual version of her costume. Her body suit now exposed her arms and neck, but she wore a leather jacket over it. She traded in her leggings for fur-lined boots. Finally, Doreen wore a headband with squirrel ears on it. [Unbeatable Squirrel Girl (1st series) #1] 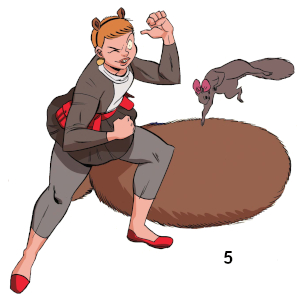 5) After Doreen shared her double life with her roommate, Nancy Whitehead decided to sew a warm weather costume for Squirrel Girl. This thin, brown/grey suit had a white streak down the center to resemble some traditional squirrel coloring. Doreen also wore a red utility belt, slippers, and an aesthetic skirt over her leggings. [Unbeatable Squirrel Girl (2nd series) #1]

6) For the U.S. Avengers, Doreen fashioned a more-patriotic version of her classic costume. She wore a red one-piece with blue leggings and red boots. She typically had an open neckline, but sometimes wore a second blue bodysuit layer under her one-piece for protection, especially when being carried through the air by her teammate, Cannonball. Her squirrel ears now came with aviator goggles, as well as a bomber jacket, leather gloves, utility belt and American neckerchief. [U.S. Avengers #1] 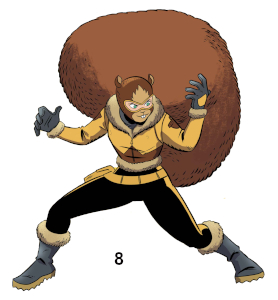 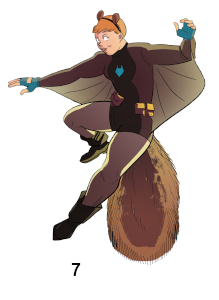 7) Squirrel Girl’s flying costume came in several shades of brown, with a stripe down the center like her normal suit. For a bit of color, she wore blue fingerless gloves and a blue squirrel insignia on her chest, along with a yellow utility belt. The jet pack built onto the back of her costume was supplemented with specially-designed fabric membranes under her arms, allowing her to glide.  [Unbeatable Squirrel Girl (2nd series) #17]