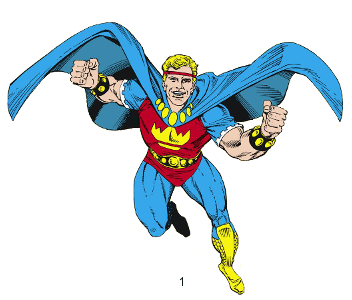 1) Quasar’s first costume, given to him by SHIELD when he took on the role of Marvel Boy, matched that of the deceased Crusader. The costume consisted of golden boots over blue tights, a red torso section, emblazoned with a crown-like symbol on the chest, short blue sleeves and a blue cape. His golden belt and the section or his cape around his neck matched the golden orbs of his Quantum Bands. The outfit was capped off with a red or black headband [Captain America (1st series) #217] 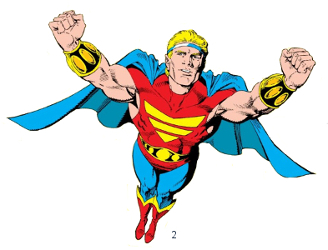 2) After Quasar was appointed Protector of the Universe by Eon, she bestowed a new costume upon him. This new costume was similar to the last with some adjustments. The sleeves and neck connection for his cape were removed, the boots were now red and the chest symbol altered to a three striped shield. [Quasar (1st series) #2] 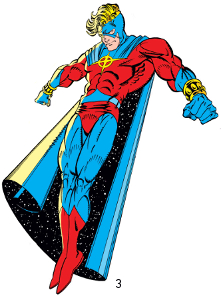 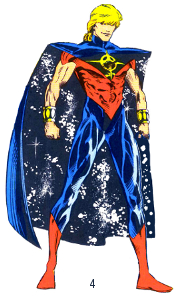 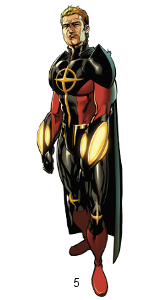 3) Upon saving the cosmic entity known as Origin, Quasar was rewarded with a new costume, inspired by Captain Marvel’s. The costume was a marked change from the previous, adding long red sleeves, blue gloves and changing his chest emblem to a star akin to Mar-Vel’s. The interior of his blue cape included a starscape. Most notably, this costume included a blue mask that left the hair and lower half of the face exposed [Quasar (1st series) #18]

4) After returning to life Quasar created his own costume for the first time consisting of a red torso and boots, blue pants and a triangular blue section on his chest that merges into a cape with prominent shoulders. Upon his chest was the same star emblem that adorned the previous costume, and within the interior of his cape he retained the starscape. [Quasar (1st series) #25]

5) After entering the Fault, Quasar’s energy form recreated his physical form and he found himself with a new costume. More armored than his previous costume, it consisted of a black cape, chest, pants gloves and shoulder pauldrons and red sides, sleeves and boots. The stair logo upon his chest was now much larger, with the lowest point extending to his belt. Star emblems on his knees complemented the one on his chest, while glowing orbs on his boots matched those on his Quantum Bands. Like his previous costumes, the interior of his cape retained the starscape. [Realm of Kings #1]