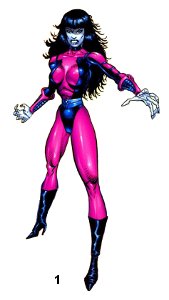 2) After her cybernetic upgrade Nebula also changed her standard costume to a more revealing outfit. In addition to cybernetic components in her right arm, leg and face she wore a purple and blue tank top, black shorts and gloves, and a blue and purple boots. She also often covered this with a large ankle length black coat. [Silver Surfer (3rd series) #73] 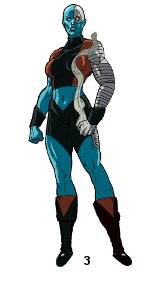 3) While as a member of Gamora’s Graces Nebula adopted a simple outfit consisting of an orange and black short-sleeved top that exposed her mid-section, black shorts, and black and orange boots. [Annihilation: Ronan #2]

4) At some point after the Annihilation War, Nebula made some amendments to her cybernetics. Her large faceplate was replaced with smaller pieces of machinery. An apparent side effect of this was a discoloured streak of purple blue skin down the middle of her face. She also changed her regular clothing to a sleeveless top and long pants, often adorned with weapons. [Guardians Team-Up #1]