The origins of the woman known as Nebula are shrouded in mystery. A notorious pirate and liar, the woman always strived to build a reputation for herself, so any claim of her heritage is questionable.

While she claimed to be the granddaughter of the Mad Titan Thanos, this claim was never proven. Thanos himself has both denied and accepted the claim in the past, seemingly on his own whims. Despite this, she genuinely seemed to believe she was a descendent of the tyrant. Furthermore, on other occasions, Nebula claimed the Luphomoid warlord Zorr as her father. Perhaps contrary to this, in flashbacks it was revealed a man strongly implied to be her father, who shared Thanos’ distinctive chin, was violently and sexually abusive for all of Nebula’s childhood until she finally killed the man in self-defense in her teens. Whether these memories were delusion, lies or the actual truth, the secrets of Nebula’s origin are a mystery. [Nova (3rd series) #1, Silver Surfer Annual #5]

Whatever the truth, Nebula followed in the footsteps of the man she claimed was her grandfather and embraced a life of violence. During the chaos that arose following Galactus’ destruction of 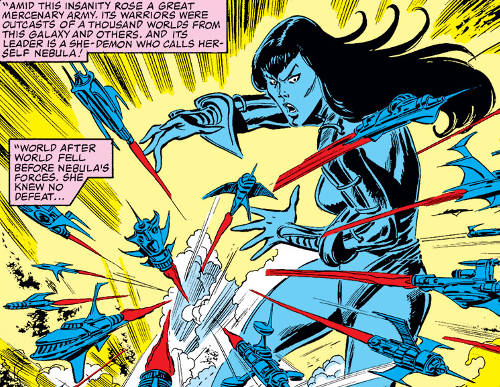 the Skrull throneworld, she amassed a mercenary army, consisting of warriors from a thousand worlds. After the loss of their leaders, the Skrull Empire was in ruins, with numerous factions vying for power. Nebula forged an alliance with one Skrull governor named Gorth, who paid her mercenary force to conquer numerous worlds for him.

In actual fact, Nebula was playing her own game, amassing power for her own ends, and Gorth was simply a patsy. Her mercenary force conquered numerous worlds until they reached a military planet controlled by Skrull General Zedrao. Unable to penetrate the world’s planetary shield, she left, vowing to return with enough firepower to reduce the planet to dust.

At the time, Thanos was believed dead by the universe and his massively powerful ship, Sanctuary II, lay abandoned. Nebula assigned four of her mercenaries to seize control of the 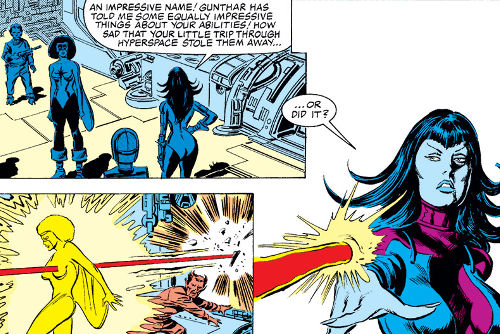 apparent derelict. However, the Avenger Captain Marvel, Monica Rambeau, was at that moment on board investigating the ship and was carried light years away from the Milky Way. With no way to get home and hyperspace interfering with her photonic abilities, the Avenger reluctantly agreed to join Nebula’s crew.

However, Nebula, who was familiar with the reputation of the Avengers, was instantly suspicious of the woman upon meeting her. She rightly believed that Captain Marvel was faking her inhibited powers and blasted her point blank with a laser, causing her to reveal her abilities. If Monica was to stay with her crew, Nebula insisted she prove herself. 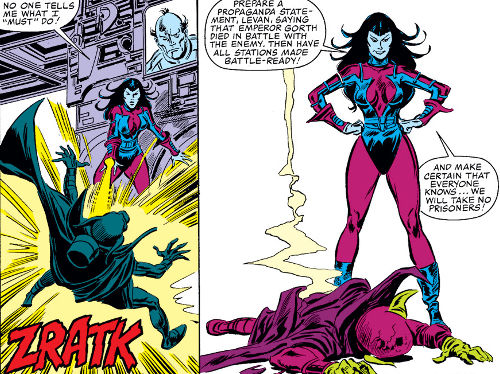 Zedrao’s world under the pretense of investigating its defenses. However, once Monica created an opening in the shield, Nebula immediately fired an anti-matter torpedo through it, seemingly destroying both it and Captain Marvel.

Her goal achieved, Nebula checked in with Governor Gorth once more to show him her powerful new toy. Although she was ostensibly working for Gorth, the mercenary leader showed no qualms with cutting the impertinent Skrull down to size, demonstrating that he was really just a figurehead. Eventually, she grew tired of the Skrull’s demands and murdered him outright.

With Sanctuary II, Nebula cut a swath of destruction across the fractured Skrull Empire. She even ventured into nearby Xandarian space, where she destroyed Xandar, homeworld of the Nova Corps. Nebula was amazed with the power of Sanctuary II and hoped within its vast information resources she may be able to learn more about the man she believed was her grandfather. However, her musings were interrupted by an attack from the joint forces of Zedrao’s armada and the Avengers, having come in search of Captain Marvel.

While Nebula believed she had destroyed not only General Zedrao, but his forces and Captain 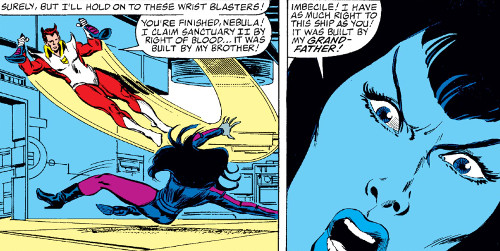 Marvel, the Avenger had actually stopped the mercenary’s anti-matter missile and helped the Skrulls fake their death. Captain Marvel’s fellow Avengers soon joined her and together they attacked Sanctuary II and infiltrated the ship. Recognizing that she was outmatched, Nebula made for her escape, but was intercepted by the Avenger Starfox, Thanos’ brother. During their fight, Nebula informed him she was his grand-niece, distracting the Titan long enough for one of her henchmen to take him down with a psychic blast.

Before she could escape, though, Nebula was intercepted by an unexpected third party: the Beyonder. The enigmatic and immensely powerful alien was on a quest to discover what it meant to be human and, in an attempt to win the favor of the Avengers, he cast Nebula and her crew out of the galaxy. [Avengers (1st series) #257-260]

Where Nebula was sent to by the Beyonder is unknown, but she was not seen again for months. After her defeat, she and her minion Gunther scoured the galaxy for new sources of power. Though the ultimate goal of her search was nothing less than to rule the universe, Nebula did also express a desire to emulate the man she believed was her grandfather by destroying the universe, though this may have just been posturing. 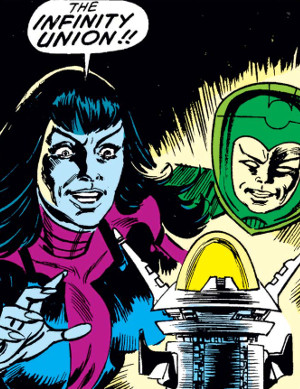 Along the way, Nebula learned the powerful and enigmatic cosmic being known as the Stranger was in possession of the Infinity Union, an item of intense and mysterious power. Unlike hundreds before her, Nebula managed to infiltrate the Stranger’s world and steal the Infinity Union undetected. [Avengers (1st series) #317]

Though she now had the Infinity Union, Nebula still needed a source of immense power to charge it. Having studied the item in depth, she was able to locate the Stones of Halkor on Omicron Seti, a set of instructions carved by an ancient, forgotten race and which provided the formula for an incredible energy source capable of charging the Infinity Union. [Avengers West Coast #48]

With this newfound knowledge, Nebula learned her best chance of charging the Union was, 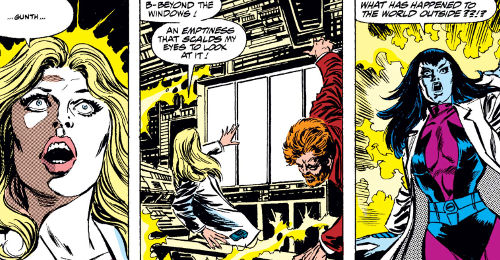 surprisingly, on Earth. The key to this source of energy was American scientist, Dr. Harker, who had just received approval from PolyDyne Industries to build an atomic compressor of his own design. Nebula approached the scientist and offered access to her alien technology, with which Harker was able to get the compressor from a concept to a working unit extremely quickly. As Harker developed his unit at PolyDyne, Nebula oversaw the operation while disguised as a human, with none of the employees save Harker aware of her origin.

When the compressor was finally activated, it had the unintended consequence of duplicating the effect of the big bang and erasing the universe. When the effect proved momentary, Nebula and the scientists pressed on. However, the effect increased with each use of the machine until the universe ceased entirely, save for the PolyDyne building. Nebula was incensed, since she wished to use the energy from the compressor to become ruler of the universe, which now no longer existed. 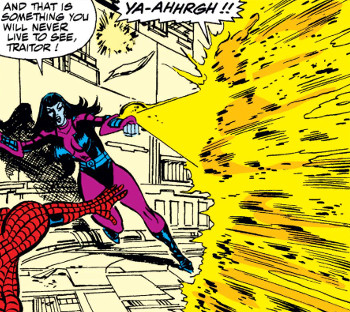 The Avengers, who had managed to insulate themselves from the universe’s erasure, infiltrated the facility and immediately came upon Nebula, who took them on singlehandedly. Despite being outmatched by the likes of Thor, Nebula fared very well against the group. Proving her ruthlessness, Nebula incinerated Dr. Harker when he tried to tell the Avengers how to shut down the atomic compressor. Despite this, another scientist helped the Avengers disable the compressor, which restored reality. [Avengers (1st series) #311-315]

In the subsequent confusion, Nebula escaped back to her ship, only to be subdued by Starfox, who had been spying on her since she found the Stones of Halkor. Starfox used his emotional 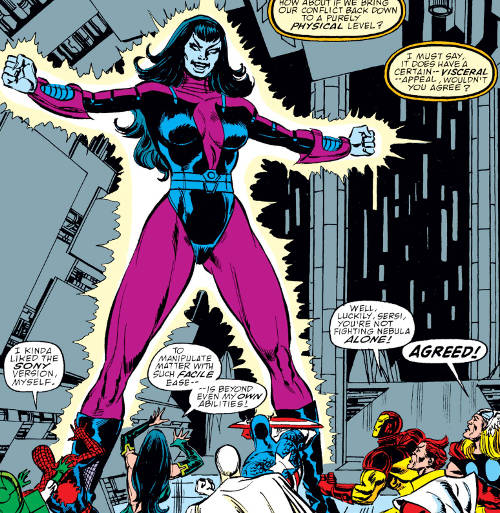 manipulation abilities to “bliss out” Nebula, leaving her in a state of constant euphoria. Unfortunately for Nebula, her luck turned even worse when the Stranger arrived, hell-bent on killing her and retrieving the Infinity Union.

In her euphoric state, Nebula was useless to the Stranger in finding the Union. To make matters worse, Nebula had modified the Union so that, if anyone but her touched the item, it would transferred all its accumulated energies to her. When one of the Avengers accidently triggered the energy transfer, Nebula suddenly achieved a godlike status.

After her escape, Nebula immediately set about gathering an army, many of which were former servants of her late alleged grandfather Thanos. Revisiting her old plan, she captured Thanos’ abandoned ship Sanctuary II once more. Unbeknownst to Nebula though, Thanos had returned to the land of the living, and had set out gathering the powerful Infinity Gems to serve his mistress Death. When Thanos arrived on Sanctuary II, wanting to retrieve his ship, he was displeased to discover Nebula.

The Mad Titan found the notion that he, a devout servant of death, would reproduce fundamentally offensive and denied Nebula’s claims he was her grandfather. When Nebula tried to flee, Thanos burned her badly with his eye beams and left her for dead, taking Sanctuary II and 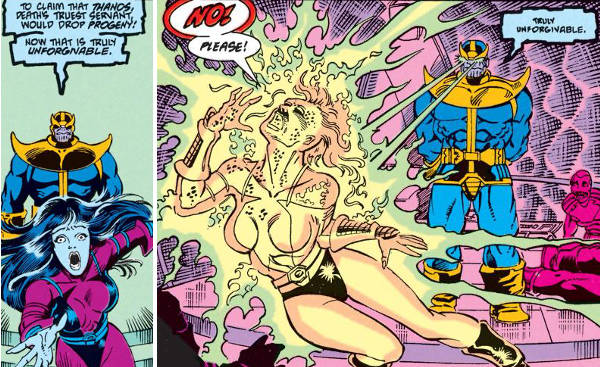 her crew for himself. Nebula’s last loyal crewmate tended to the badly wounded woman, saving her life, but when Thanos discovered this he used the power of the Infinity Gauntlet to transform her into zombie-like state, trapped between life and death. [Silver Surfer (3rd series) #38, 45]

With the power of the Infinity Gems in his hand, Thanos was frustrated that he still couldn’t win Death’s affections. He used Nebula as a testament of his love for the entity by molding her into a state between life and death, a symbol of the blasphemy of life and the promise of Death. Unfortunately for Thanos, this had no impact on Death. No further use to him, the Mad Titan left the zombie-like Nebula to shamble aimlessly around his temple, while he set about his universe altering work with the Infinity Gauntlet. 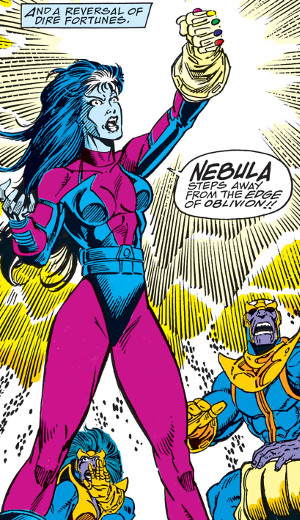 The woman seemingly wandered Thanos’ temple aimlessly while the Titan participated in epic battles against the greatest heroes of the universe, then against the universe’s cosmic entities themselves. Everyone who encountered her wrote her off as mindless, but deep within Nebula the thirst for vengeance burned. When Thanos’ mind transcended to a cosmic state, his body was left catatonic and vulnerable. Nebula seized her opportunity and removed the Infinity Gauntlet from Thanos, claiming its vast power for herself and restoring her mind and body.

Unfortunately for Nebula, she lacked the intelligence or experience with the Gauntlet that Thanos had. In the effort to spite the man who had tortured and humiliated her, Nebula used the gauntlet to reverse time by twenty-four hours, undoing everything Thanos had wrought. However, she failed to anticipate this would include returning her to the zombie-like form, or releasing the cosmic entities Thanos had previously defeated. While she was able to resolve these issues easily with the power of the Gauntlet, she was unable to prevent Adam Warlock from entering the Soul Gem and exerting his own influence on the Infinity Gauntlet. Warlock claimed the Gauntlet from within, leaving Nebula out of luck. Now powerless, the furious Nebula was taken into custody by Starfox, to face Titan justice. [Infinity Gauntlet (1st series) #1-6]