Mentallo was hired as a mercenary by RoXXon Oil when they purchased digging rights on Monster Isle from Japan. The sale was mostly a joke from the Japanese government, who believed it impossible for RoXXon to navigate the Kaiju-class Deviant mutates and super-fauna that gave Monster Isle its name. Nevertheless determined, the energy corporation hired Mentallo to use his psychic abilities to tame the monsters, making it safe for their drilling team to make land and get to work. Flumm had the same idea, but with a twist: he seized control of the monsters and used them to ransom 800 million dollars from RoXXon, or else he would destroy their Asian holdings. 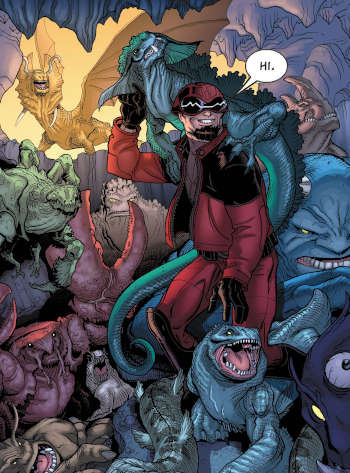 Unfortunately for Mentallo, the X-Men were in Tokyo during his first show of force. After they defeated the dragon at the RoXXon Tokyo refinery, the X-Men were alerted to the situation by RoXXon security, and made their way to Monster Isle. Mentallo caused them to crash the Blackbird thanks to his pets, and managed to capture Wolverine and Emma Frost. Flumm planned to cover his escape after he got the bearer bonds by setting off the explosives RoXXon brought for excavation, causing the local volcano to erupt. Cyclops managed to get the drop on Mentallo, however. His explosives were disabled and his helmet destroyed. Flumm had enough telepathic juice on his own to set the X-Men against each other for the moment and run, only to have 800 million dollars in bearer bonds dropped on his head by his winged courier, fulfilling the last command he gave it before losing his helmet. [Astonishing X-Men (3rd series) #36-41]

Mentallo survived and was later recruited by Andrew Forson, the current Scientist Supreme of A.I.M. Forson was charismatic and politically savvy, re-imagining A.I.M. as a sovereign nation seeking entry in the United Nations from their new island base of Barbuda. He built a new High Council of A.I.M. to serve as the ruling body, with Mentallo installed as Minister of Public Affairs. With scientists like Superia, spies like Yelena Belova and powerful entities like Graviton and Jude the Entropic Man, Flumm was confused over what Forson expected him to contribute to the council.

Indeed, Forson was disparaging of Mentallo's psychic powers at first, but encouraged Flumm to try developing his powers in a direction he hadn't previously considered. With some encouragement and direction, the engineering knowledge he picked up from the Fixer, and the proper focus of his abilities, Mentallo developed a knack for encouraging Artificial Intelligence to 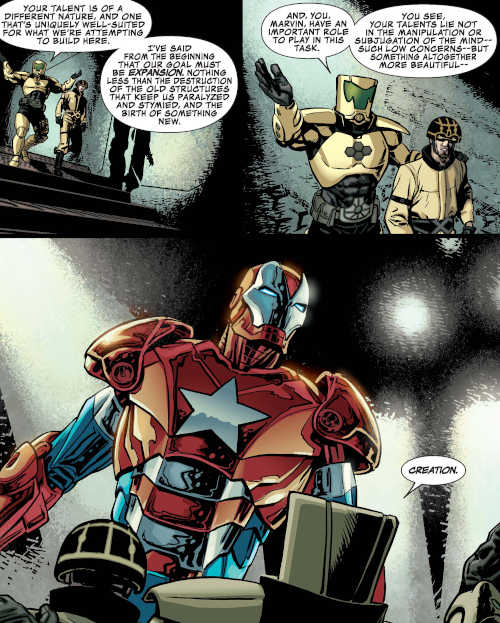 blossom into full sentience. His first contribution was to take the Iron Patriot drones stolen from a government defense expo and give them life. Rather than reprogramming the Patriots to serve A.I.M., they were dispatched to do exactly what they were originally programmed for: eliminating threats to the American way of life. Without human oversight to consider human casualty figures, though, the Iron Patriots racked up a civilian body count on unverified targets, forcing S.H.I.E.L.D. and the United States to own these attacks and their fallout or admit their technology had been hacked.

As time passed on Barbuda, Mentallo worked on improving on his initial success, bringing sentience and awareness down to the microscopic scale with A.I.M. nanobots. He also became friends with Taskmaster, Minister of Defense, spending their spare time playing ping pong and video games. Mentallo's work expanding his mind through technology made him less and less concerned with everyday affairs. Still, he was affected when word reached him that Taskmaster had been killed, apparently as a double agent working for S.H.I.E.L.D. Presumably out of respect for his friend, Mentallo knocked out an A.I.M. agent trying to stop a S.H.I.E.L.D. Secret Avengers 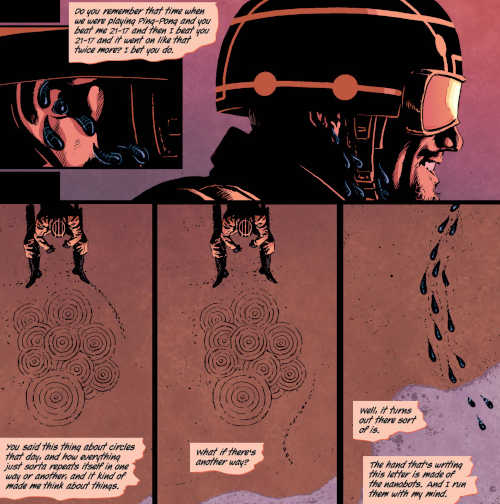 team from escaping A.I.M. Mentallo's communion with the A.I.M. nanobots was such that he could now inhabit his own body or a nanobot, or many nanobots at once. His powers were such that he ascertained Taskmaster was still alive, despite being in a vegetative state. Although not entirely clear, it appears Mentallo may have encouraged Taskmaster's recovery using the nanobots before surrendering his mind to the microscopic machines completely, as they were carried out to sea. [Secret Avengers (2nd series) #2-16]

Flumm eventually returned to his own body, separating from the nanobots. He fell on hard times and was thrown into a prison in Tunisia on the instructions of Wilson Fisk. The Kingpin wanted to soften Mentallo up before using him as a pawn in his latest venture. Fisk had uncovered rumors of a Nazi Sleeper robot guarding a cache of Nazi gold somewhere outside of Cairo, hidden behind genetic recognition protocols keyed to the late C.I.A. agents, Richard and Mary Parker. Believing their son Peter Parker could be his key to getting the gold, Fisk wanted to use a C.I.A. operative named Teresa Durand as his stalking horse. Mentallo's powers would be augmented by 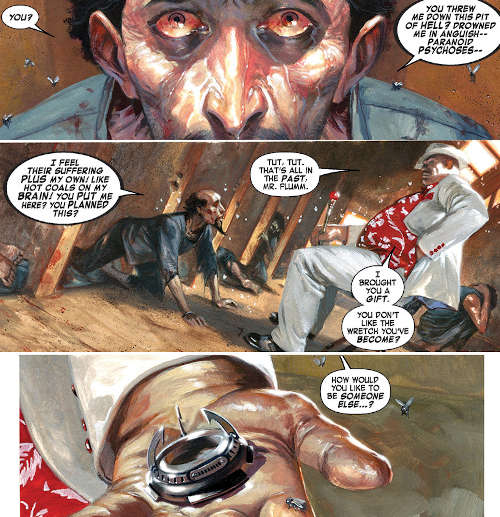 technology, allowing him to implant a perception filter in Parker and Durand to convince them Teresa was the long-lost daughter of Richard and Mary. Already an orphan, Teresa would believe her most treasured possession was an old photo of her as a baby with the Parkers, her "birth parents." Mentallo's screen would also cause Peter and Teresa to perceive a greater family resemblance between them than there actually was.

Through Fisk's machinations, Agent Durand became aware of a plot to seize "the son and daughter of Richard and Mary Parker" and was convinced she was that daughter. She sought out Peter Parker to protect him from one of Fisk's abduction attempts, intended to fail. In this roundabout way, Fisk planned for Parker to deliver himself to the Sleeper site, intent on getting there before the bad guys to protect his father's work burying the Sleeper. Durand would unwittingly aid Fisk's efforts by providing professional support for Peter, urged on by the alleged family connection they shared. When push came to shove, Kingpin would be able to threaten Parker's "new sister" with death in order to force him to comply.

Kingpin's plan proved highly effective, as he and Mentallo ambushed Parker and Durand at the Sleeper tomb outside of Cairo. To his added glee, Fisk also learned that Peter Parker was actually his old nemesis, Spider-Man. Knowing Spider-Man would never let anyone die, Fisk felt free to reveal the full scope of his manipulations before forcing him to open the vault anyway. Despite the 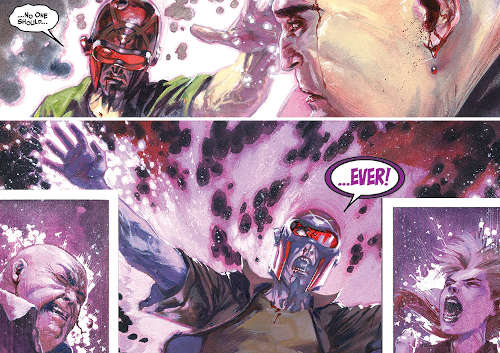 dangers, Spider-Man was able to destroy the Sleeper and defeat Kingpin as well. Mentallo, who hated being forced to work for Kingpin, unleashed a psychic assault that robbed everybody present of any knowledge of Peter Parker's identity, including himself. Burning out the augmenter once again reduced Marvin Flumm to a vegetative state until he could recuperate. [Amazing Spider-Man: Family Business]

Marvin Flumm became one of many super-villain prisoners sent to Pleasant Hill for the Kobik Initiative. Maria Hill and S.H.I.E.L.D. had envisioned a new kind of holding facility for super-criminals, using the sentient Cosmic Cube named Kobik to implant false realities on the felons, changing their minds and bodies into pacified forms. These villains received new lives as citizens of the small town of Pleasant Hill. When Baron Zemo and the Fixer restored their true nature, however, they led a revolt with Mentallo and the other super-villains reclaiming their identities and rebelling against S.H.I.E.L.D. Mentallo was among the numerous escapees gathered by the Hood after Pleasant Hill for some kind of retribution, but Robbins was unsuccessful in holding this group together for anything substantial. [Standoff crossover]

Mentallo's next venture was to join forces with the Reverend William Stryker, who sold his soul to 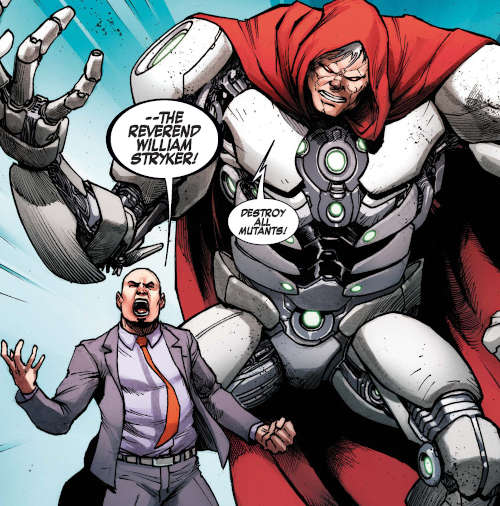 Hell for greater power. Together they created a cult-like Church of Prosperity in Aspen, Colorado. Flumm used his abilities to lure the uber-rich into submitting their worldly possessions to the church in exchange for the promise of greater power. His supernatural backing allowed Mentallo to control even the powerful telepath Monet St. Croix. Monet was used as a lure to draw in Sabretooth and his Weapon X-Force team as well, who had recently clashed with Stryker.

The Reverend and Mentallo managed to capture Weapon X-Force and tried to use them as a blood sacrifice to appease Stryker's new Satanic deity. Flumm lost telepathic control of the congregation, however, and Weapon X-Force managed to kill Stryker's Earthly form sending his 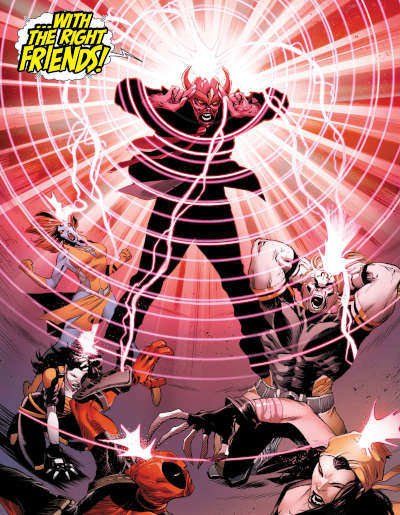 soul back to Hell. Sabretooth and the mercenaries pursued Stryker into Hell itself to prevent him from rising again. Meanwhile, Mentallo prepared to sacrifice the congregation instead of the mutants to ensure the Reverend's return. Half of Weapon X-Force went after Mentallo, prompting Flumm to beg Stryker for a demonic upgrade. As a supernatural telepath, Mentallo overwhelmed the mutant team and prepared the sacrifice, but Sabretooth still stood against him. Flumm made the mistake of stripping Creed's conscious mind, leaving the animal side of Sabretooth ready to oppose him. The full sacrifice failed and Lady Deathstrike impaled Mentallo from behind before Reverend Stryker could be resurrected again. Given the magic and arcane elements being tossed around though, it seemed Mentallo only lost his enhanced powers, not his life. [Weapon X (3rd series) #22-27]

In recent months, the X-Men have orchestrated the founding of a mutant homeland, the sovereign island nation of Krakoa. Mentallo was among many former villains who accepted citizenship and international amnesty in exchange for a promise of good behavior. Always an opportunist, it remains to be seen whether Marvin Flumm will make himself useful to Krakoa, or use Krakoa shield his own schemes. [House of X #5]

With 737 Issue Summaries online, chances are you may not have read the following Issue Summary: