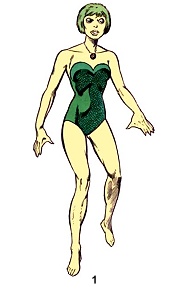 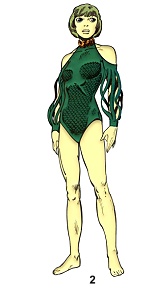 -) Although never shown or outright stated, it’s safe to assume that, upon being recruited by Department H, Marrina received a red and blue training uniform like all new recruits and Gamma Flight members. It’s quite likely that hers was a trimmed down bathing suit version of the standard outfit.

1) The costume she was given upon being upgraded to Beta Flight was basically a green, strapless bathing suit, made of some fabric that gives the impression of scales. Although she would meet him only much later, it seems to be the same material that Namor’s swimming trunks are made of. The amulet on her necklace functioned as a receiver for Alpha Flight’s signal frequency. [Alpha Flight (1st series) #1]

2) As he considered her costume inappropriate for a royal consort, the Sub-Mariner ordered his tailors to redesign it. The amulet was worked into a special necklace, to which the front of the basic green bathing suit was attached. While her shoulders were still left bare, sleeves were added and slit several times at almost their full length, giving this costume a rather elegant look. [Alpha Flight (1st series) #14]

-) However, this outfit proved to be rather impractical, as the uniform was torn in her next battles. Marrina returned to wearing her previous costume, even after marrying the Sub-Mariner. [Avengers (1st series) #272] 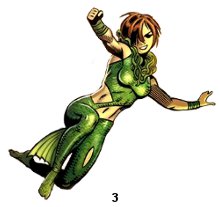 3) Alongside her new attitude, Marrina started wearing this new costume when Alpha Flight reformed. The scaley costume consists of long green pants with fin-like accessories at the ankles, a matching green tank top lined with a collar that resembles seaweed. Marrina has some tattoos on her upper arms, and has a pink coloring through her hair. [Alpha Flight (4th series) #1]