The story of Marrina began about fifty thousand years ago in the distant reaches of space. Having realized that conquering the universe by traditional means - flying to a planet, conquering it and moving on to the next - took them too long, the alien species called the Plodex came up with a different strategy. They built special colonization ships designed to carry thousands of Plodex eggs held in suspended animation. These ships were sent to numerous primitive planets still in the early phases of their development, some of them so far away from Plodex space that the journey took hundreds, if not thousands, of years. Upon arriving at their intended destination, the ships were programmed to land in the most uninhabitable region of the planet where it would draw from the planet’s resources and transform itself into a huge underground complex. Once completed, the complex would send out a summons call to the planet’s inhabitants. Only the most dominant life-form would be capable of surviving the trip to the complex. These unfortunate creatures were then studied and dissected, down to their molecular make-up, so that the stored Plodex egg-pairs could be genetically imprinted with the traits of this dominant life-form. 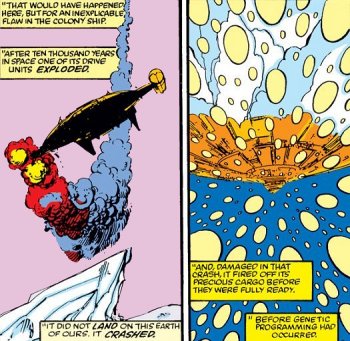 Once this process was complete, the complex would eject the egg-pairs, distributing them across the planet. While not all of the Plodex hybrids would survive their hatching or find their mate to breed, the sheer number released upon the planet would ensure that the Plodex would outnumber all other life-forms of the planet.

The same would have happened on Earth, if one of the colony ship’s drive units had not exploded after its ten thousand year trip through space. The craft arrived on Earth but crashed down in the Arctic region. The ship’s systems were heavily damaged by the impact and its egg-pairs were ejected prematurely, before they had been genetically programmed. Those eggs that weren’t destroyed were unable to hatch because the alien infants inside were still without a proper shape. Over the centuries, the remaining eggs dried out or were destroyed by other means. The Plodex invasion of Earth had failed... or so it seemed. [Alpha Flight (1st series) #3-4] 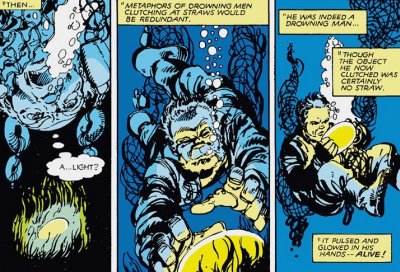 Roughly two decades ago, Newfoundland fisherman Tom Smallwood was washed overboard during a storm and got tangled in his nets. Believing himself to be a goner, he suddenly spotted a glowing object among the mire on the sea bottom. Smallwood pulled it free and held on to the oval sphere as it buoyed to the surface. Unsure what it really was, Tom took the object home with him where his wife, Gladys and their grandson, Dan curiously examined it.

Noticing what seemed to be a form inside, Gladys broke open the egg. At first, she thought the creature inside was not human but when she cleared away most of the jelly-coating it looked like a human baby girl, 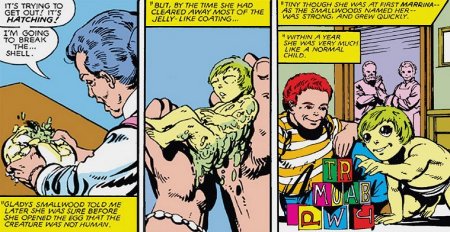 except for her unusually big eyes and pale yellow skin tone. Of course, the glowing object was one of the last remaining Plodex eggs and upon opening it, Gladys Smallwood had imprinted it with her genetic code. This caused the young Plodex to take the form of a human female. As a result of being underwater for approximately forty thousand years, the egg had become water permeable and the embryo inside developed amphibious traits.

The Smallwoods named the girl Marrina and she grew up quite happily, as the community the Smallwoods lived in was quite small and clannish. Marrina was accepted by the others and nobody bothered about her strange appearance. However, on her sixteenth birthday she demonstrated that her non-human traits went beyond looks. 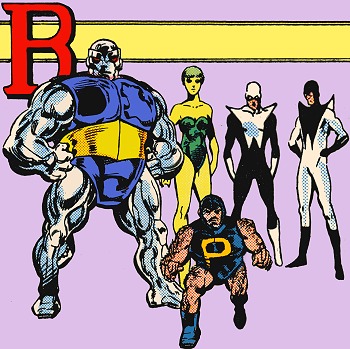 While she had been swimming with the other teenagers before, Marrina suddenly discovered herself to be capable of breathing underwater and swimming at an incredibly high speed. Wishing his foster sister all the best, Dan Smallwood contacted Canada’s Ministry of Defense several months later. Eventually, Marrina came to the attention of James MacDonald Hudson, a.k.a. Guardian of Alpha Flight. She passed all of Department H’s psychological standard tests with flying colors and was the first member of the training team known as Gamma Flight. Before long, she had progressed so much that she was upgraded to the second-tier team, Beta Flight. [Alpha Flight (1st series) #2]

A few months later, the Canadian government cut the funding of the Flight program and closed down Department H just as Marrina and her teammate Puck were about to be promoted into Alpha Flight. However, when the Great Beast known as Tundra rose it became clear that the country needed a team of superheroes. Guardian’s wife, Heather Hudson, sent out a distress call to the old team to aid her husband in fighting the creature. The signal was also received by the two Beta Flight members. In fact, it was Marrina’s unexpected arrival in a water spout that allowed the team to emerge victorious from the conflict, as Shaman magically transformed the spout into a rain storm that washed the earth-made Tundra away. In the wake of this conflict, Alpha Flight decided to remain together as an independent organization. [Alpha Flight (1st series) #1]

A few weeks later, Marrina was in the middle of a training session when she “heard“ a siren call, compelling her to come “home.“ Puck noticed that all was not well with Marrina but when he gently touched her shoulder, she lashed out at him with a ferocity she had never shown before. 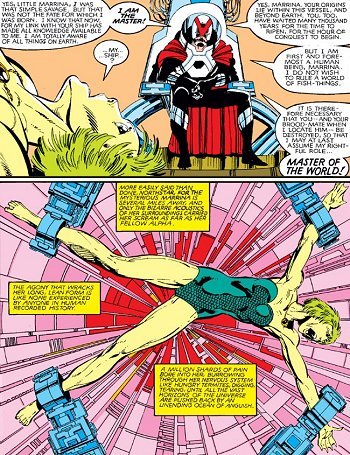 Marrina’s surprising attack left Puck critically injured and Marrina escaped into a nearby river. Not knowing where exactly “home“ was, she followed the call and swam north to the Arctic region where she found a huge alien complex. Inside, she was greeted by the self-styled Master of the World, who used the ship’s systems to imprison and torture the young woman. He revealed to Marrina her true origin and further explained that, after crashing down and ejecting the eggs, the Plodex ship still carried out its original programming. It had grown into the huge colonization complex they were now in and located the planet’s dominant life-form: a primitive human that had been cast out of his tribe. The savage human was analyzed, dissected and catalogued by the ship. His brain was then added to its systems as an extension to its computer matrix. Over the centuries, he came to understand what had happened to him and eventually took over the entire complex with his will. He then ordered the ship to put him back together in perfect condition, as the Master of the World. However, he saw his plans for world domination endangered by the single surviving Plodex, Marrina. To prevent any disruption to his plot, the Master used a breeding summons call from the ship’s systems to lure Marrina into his trap.

Fortunately, Marrina’s teammates were able to track her down. They were aided by Namor the Sub-Mariner, who was investigating certain minerals being extracted from the ocean water (caused by the ship’s systems to maintain itself). Together, they were able to free Marrina and the Master fled after activating a self-destruction mechanism. Unwilling to accept the things the Master had revealed about her as the truth, Marrina searched the ocean waters for any clues. However, there was no wreckage left to search – the entire complex had dissolved into its basic components. The Sub-Mariner invited Marrina to accompany him to Atlantis, thinking his people were better suited to solve the many mysteries around her. Intrigued by the notion of an underwater civilization, Marrina accepted and left with Namor. She did not even take time to inform her family of her departure. That unpleasant task was left to Guardian, who could provide only little comfort to Dan Smallwood,who obviously had more than fraternal feelings for Marrina. [Alpha Flight (1st series) #2-4]

Marrina continued to work with Alpha Flight, assisting them with a few incidents, such as the team’s investigation into the polluted waters by the town of Beaver Falls. They uncovered that the water’s black color was only partially caused by the nearby coal mines and industry, but that it had also been infected by the alien Dire Wraiths. Working together with Rom the Spaceknight, Marrina and Alpha Flight were able to save the townsfolk from being possessed by the aliens. However, the town itself was destroyed in a giant flood-wave caused by a dam break. During the mission, Marrina stayed in the polluted waters too long and became ill. Luckily, Shaman was able to magically cure whatever effects the pollutants and alien elements in the waters had on her. [Rom #56-58]

Although Namor had promised Marrina to further explore her origins, the pair soon found themselves side-tracked

by the growing attraction between them. Marrina was so caught up in their romance, she forgot to wear her amulet one day and didn’t receive Alpha Flight’s distress call when they clashed with some of Marrina’s former teammates, now calling themselves Omega Flight. In the aftermath of this encounter, Guardian’s battle-suit exploded, apparently killing him. [Alpha Flight (1st series) #12]

When she learned of this tragic event, Marrina blamed herself for not having been present to aid the team. Although she felt she no longer deserved to be among Alpha Flight, she soon found herself in a position where she had to call them for help. The alien Collector had come to Earth, eager to complete his collection of Plodex creatures with Marrina. 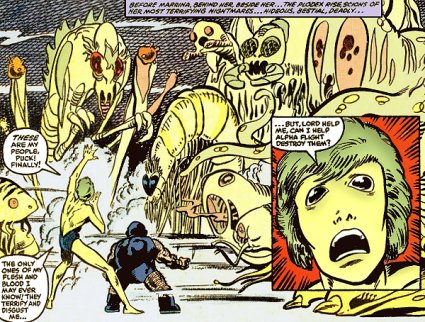 His story of the Plodex race matched what Marrina had learned from the Master of the World. Teaming with Spider-Man, Alpha Flight fought the Collector and his pet Snake-Eyes, a giant serpent with hypnotic abilities. During the fight, the systems on the Collector’s ship were damaged and the imprisoned Plodex creatures awoke from their cryogenic sleep. Face to face with other members of her race, Marrina could no longer deny the truth about herself. Still, she sided with her teammates and helped to keep the Plodex contained inside the Collector’s ship until he departed, though Snake-Eyes had escaped into the ocean. After hearing her teammates refer to the Plodex as "horrors“ and "monsters,“ Marrina became rather depressed and could not help but wonder whether she was truly any different from these creatures. [Marvel Team-Up Annual #7]