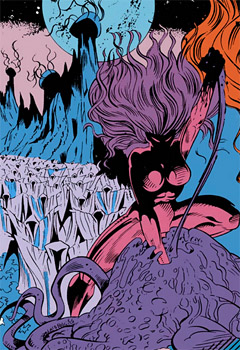 The inter-dimensional predator Lore began her life on a world vastly darker than Earth-616. As the “nexus being” of her reality, she was the node of her world's mystic energy and therefore possessed immeasurable power. A side effect of her status as her reality’s nexus was that her personality reflected the nature of her world. As necromancy was the common order on her reality, Lore was violent and parasitic. While the specifics of her early life are unknown, she appeared to occupy a religious role in her society and was seen in a flashback with a series of cloaked figures with raised arms behind her, seemingly chanting, while she tore apart a tentacled creature in some sort of ritualistic fashion.

Unfortunately for Lore, her power of Necromancy was not without a drawback. She was required to consume other life forces/energies to maintain herself. Eventually, she exhausted her own world and was required to find other pastures. Luckily for Lore (but unluckily for the multiverse), her status as a Nexus Being gave her options to flee her own desiccated planet.

Through undisclosed means, Lore discovered that she could possess the bodies of Nexus Beings like herself. These unfortunate women were said to be as “close as sisters” but all possessed of some unique power to herself, such psychometry, geokinesis or hex power. A caveat was that no two nexus beings could exist physically in a universe simultaneously. Lore would find these women in the multiverse and commission demonic agents to act on her behalf while she drove her victims insane by distorting their dreams. When she had finally shattered the mind of her victims, she would use her powers to bind their world in stasis before appearing to the nexus being and taking possession of her bodies and feasting on their homeworld. Eons passed and Lore repeated this process across realities and, according to her, destroyed over ten thousand worlds.

Following the destruction of Eleyn of Amazar, Lore targeted the Scarlet Witch of Earth-616 and started to haunt her dreams. Due to her connection to the “Nexi” (plural of Nexus Beings), Scarlet Witch had seen Eleyn die in her dreams and knew she was now being pursued. Presumably, Lore had believed that the Scarlet Witch, a tragic heroine who had suffered with mental illness and trauma already, would be an easy victim for her. 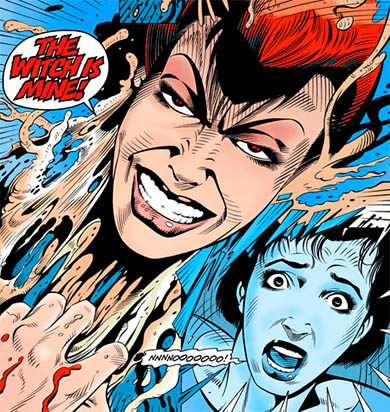 Using her magicks, Lore had either freed herself or arranged the liberation of the villain Master Pandemonium from hell. Master Pandemonium had a particular obsession with the Scarlet Witch, which made him a useful agent for Lore. Not knowing her true name and only ever referring to her as “the lady,” Master Pandemonium was tricked by Lore into thinking that it was foretold that the Scarlet Witch would fall in love with him if he followed her instructions. This false hope made the pitiable man very malleable. Lore placed him in the catacombs under a cathedral in the abandoned town of Unity in New England and had him dispatch demons to hunt Wanda at her home in the West Coast Avengers compound in Boca Caliente. Lore, likely due to her connection to Wanda, somehow knew that she would reach out to her old mentor Agatha Harkness to find the source of the demons and her nightmares and the two would find their way to the catacombs in Unity.

While the Scarlet Witch and Agatha were preoccupied with Master Pandemonium in Unity, Lore in her astral form was stalking Wanda's teammates (USAgent, War Machine, Living Lightning and Spider-Woman) in the West Coast Avengers compound. Picking them off one by one, Lore used her mystical powers to corrupt them turning them into demonic versions of themselves under her complete control. [Note: Interestingly Lore did not attempt to corrupt the Scarlet Witch's teammate Wonder Man, who also featured in this story and was living in the same compound. This was never explained. Wonder Man has had an enduring love for the Scarlet Witch and possibly Lore thought he would have been harder to control as a result of this love.] 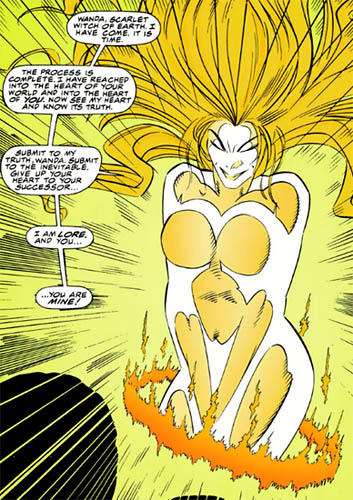 Lore dispatched them to Unity to hunt her real prey, the Scarlet Witch. By the time the corrupted Avengers arrived, the Scarlet Witch had briefly escaped Master Pandemonium. Initially sending Spider-Woman against Wanda alone, Lore doubled down with unsettling hallucinations from Wanda's past in her sustained efforts to weaken the Witch's mind. The Scarlet Witch put up a valiant fight but was eventually captured when Lore's other agents entered the fray. The corrupted Avengers and Master Pandemonium proved insufficient to contain the Scarlet Witch for very long though, as she was quickly liberated by her ally Agatha Harkness, who had briefly retreated, attempting to find help. The two witches promptly defeated the “Avenging Spawn” and imprisoned Pandemonium by binding him with magicks to a nearby spire. Lore chose this moment to reveal herself. Appearing in a bright light, she told the Scarlet Witch the same thing she had told so many of her victims, “Submit to my truth, submit to the inevitable. Give your heart to your successor. I am Lore and you are mine.”

Instantly the battle was joined, with Lore facing the Scarlet Witch and Agatha Harkness while Master Pandemonium chanted the “Lady is here, the Lady is here, how lovely she is.” Despite her incredible magical proficiency, Agatha Harkness quickly fell against Lore. The Scarlet Witch attempted to punch her foe, realizing that Lore's spirit not body was present in the realm before falling herself. While the witch was wounded, Lore explained who she was and what she was. Possibly giving too much away, the Scarlet Witch used the knowledge Lore had given her and cast a probability hex to allow herself and Lore to exist physically at the same time in Earth 616, despite the rules surrounding Nexus Beings. Lore was initially overjoyed by Wanda's hex. 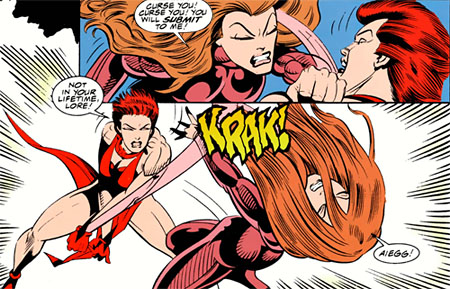 Seeing no need to possess her body anymore, Lore raised a legion of undead to kill her foe. Lore had underestimated the Scarlet Witch, who quickly dispatched the undead horde and engaged her in arcane combat. The energies unleashed from the battle also inadvertently released the imprisoned Master Pandemonium, who grabbed the Scarlet Witch, still stupidly claiming that Lore had promised that they would be together. Lore continued her ruse with the pliable Pandemonium, only to attempt to kill both of them with an arcane blast. In a shocking act of chivalry, Pandemonium threw his unrequited love out of the firing range, taking the force of Lore's blast himself.

Lore's magical reserves were waning from the battle, evidenced by the fact that the Avengers had now been freed from her control and returned to their true forms. Getting desperate, Lore attempted to draw on the power of all the vanquished Nexus Beings she had killed. This proved to be Lore's undoing, as her the spirits of her furious victims spiraled around her, consuming her. The Scarlet Witch saw her opportunity and threw a sword straight through the immobilized Lore seemingly killing her. Thus ended the scourge of the Nexi, thus ended Lore. [Scarlet Witch (1st series) #1-4] 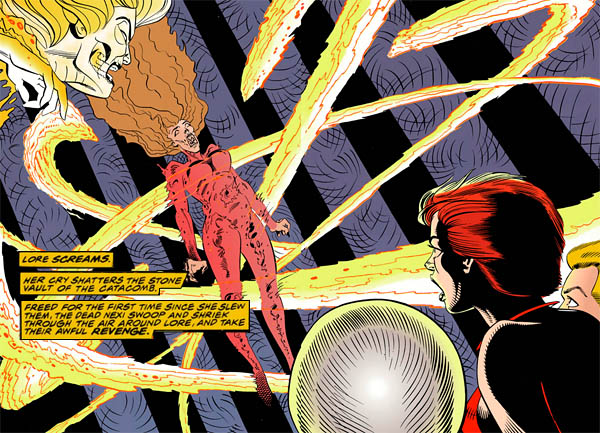 [Note: The language surrounding Lore's attack on different realities implied that she essentially ate them but this was disproved in Century: Distant Sons #1 and the realities themselves did continue, albeit with the homeworld's of the Nexus being severely damaged.]