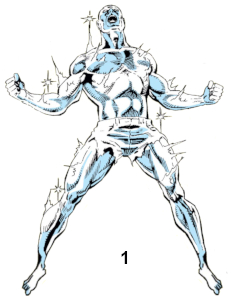 1) When he first transformed into the Living Lightning, Miguel had no costume except for a torn set of pants. His body was charged with constant electrical energy, giving the appearance that he was bald. [Avengers West Coast #63]

2) Miguel's first costume and containment suit was designed by Doctor Demonicus to both control him and give him control. The blue suit had a white pattern on the chest resembling crisscrossing lightning bolts traveling down to his hips. A purple regulator patch on his right breast was attached to the rest of the costume by a wire. His white belt had a double 'L' emblem on it, as well as his hip-mounted power pods. Miguel's natural state was now as pure energy, and the power pods controlled his ability to transform back into his human state, retaining his powers at a reduced level. Demonicus also maintained remote control over the suit, allowing him to threaten Miguel with reversing the suit's effects and dispersing the Living Lightning back into uncollected energy. [Avengers West Coast #73]

3) The Living Lightning's second costume was designed by Doctor Pym and the Avengers. The suit was primarily gray with yellow as a secondary color, particularly around his chest area and with yellow lightning arrows down his sleeves and leggings. He wore white gloves and boots, with yellow bolts adorning the gloves as well. In front, his costume had an exposed deep 'V' neck and white shoulder pads. He retained the metal belt with an 'LL' emblem and his dampening pods. The control aspect of his uniform now seemed to be wholly consolidated into the belt and pods, with the rest of the suit merely standard super-attire. [Avengers West Coast #80]

4) Miguel's lightning form became more jagged after his reconstruction by Doctor Demonicus. Fully transforming into electricity instead of merely charging himself with power, the Living Lightning only resembled a human being in this state. While flying, his legs often disappeared in a trailing bolt of lightning.