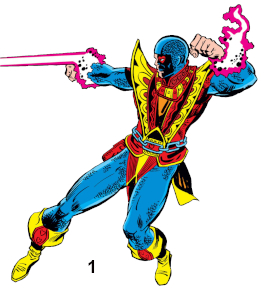 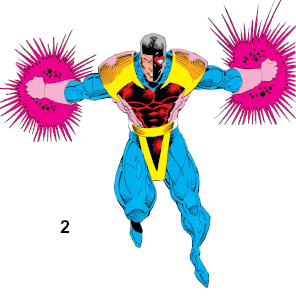 1) Jack of Hearts’ original costume was cobbled together from old armors in his father’s collection. He wore blue chain mail covering his full body and a skullcap on his head. The tunic he wore over this was a complicated mixture of red, orange, yellow and black with flared shoulders, playing card emblems around his neckline, and a loincloth with an arrow on it. He wore golden wristbands and yellow boots with red hearts on the front. The exact details changed from appearance to appearance, and we have nothing but respect for the artists’ efforts to remain consistent. Jack’s darkened skin on the left side was natural, but the red heart was a removable aesthetic. [Deadly Hands of Kung Fu (1st series) #21]

2) When Jack’s power grew too strong for his armor, the Silver Surfer took him to a genius alien armorer named Torval. His chainmail was replaced with skintight flexible metal. The armor’s “tunic” was simplified drastically with a red breastplate, golden shoulder epaulets, and a secondary black layer that extended to his skullcap. The darkened left side of his face was now covered by a vertical half-mask that was part of his skullcap. He also wore golden bracelets, belt and sash. [Silver Surfer (3rd series) #78] 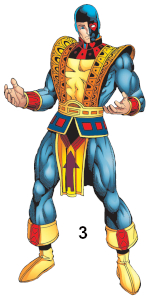 3) When Moondragon rebuilt Jack’s armor, she based it off of his old design which she had previously worked with. (There were minor color and style differences, but it’s unknown if these were intentional or simply a consequence of how complicated Jack’s design was.) As a practical modification, this suit could conduct Zero Power through his boots for flight. Previously, Jack was reliant on his hand blasts as thrusters, making it difficult for him to use his blasts offensively while in the air. [Avengers Infinity #3]

4) Jack’s next costume with the Avengers was less… busy. Although it was still technically a containment suit, he could now keep his head and hair exposed. Blue chainmail made up his undersuit, with yellow boots and a yellow tunic with epaulets. In keeping with the playing card motif, the right side of Jack’s chest plate was red, opposite the discolored half of his face. The red heart over his eye was now a laser tattoo, and was no longer removable. [Avengers (3rd series) #65]

--) Following his death as an Avenger, Jack has returned to wearing a version of his original costume.