Jonathan “Jack” Hart was the son of wealthy scientist and businessman Phillip Hart, who raised him alone after his mother Marie died. Born with a silver spoon in his mouth, Jack coasted through 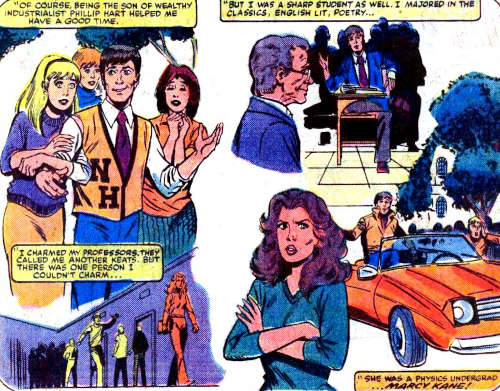 academia at New Haven College, becoming a poetry major that was a delight to all his teachers. Jack struggled to get the attention of physics undergrad Mary Kane, who thought Jack was frivolous and carefree about his studies. That changed when he showed her a poem that he had composed about her. This thawed their relationship, and the two began dating for a short time afterwards.

Jack was called home from college to learn the family business from his father. Phillip had invented Zero Fluid, a self-perpetuating liquid fuel source that would provide virtually limitless power. Hart intended to make his discovery freely available to the public and the nations of the world. This threatened the monopoly held by existing energy companies, including the criminal business interests of the Corporation. The organization sent their representative Simon Maris to deal with Phillip Hart, but Maris failed to either buy the Zero Fluid formula or blackmail Hart into keeping it secret.

When Maris couldn’t sway Hart, he summoned an assault group from the Corporation to attack the Hart Mansion during his negotiations with Phillip and Jack. The elder Hart was killed in the mercenaries’ initial barrage, and Jack barely escaped by diving into his father’s laboratory and 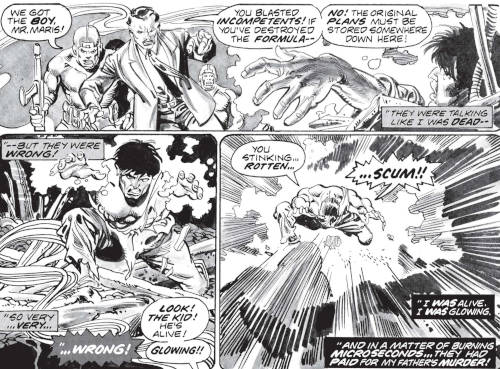 sealing the door. The Corporation used a laser to cut through the reinforced door, but inadvertently ruptured a tank filled with Zero Fluid, causing it to spill over Jack. Jack was radically altered by the Zero Fluid’s properties, transforming his metabolism into a battery of living energy. He lashed out with this newfound Zero Power, killing Maris and his assault group with a blast of pure concussive energy.

Jack’s father had been a lover of playing cards and collector of antique armor from around the globe. From those beginnings, Jack crafted an identity as the super-hero Jack of Hearts by assembling a personal armor from pieces in his father’s collection. This skin on the left side of Jack’s body darkened as dead cells, and his left eye was covered with an opaque film. Somehow, the armor helped to contain and control the Zero Power coursing through his system, letting him channel his Zero blasts through halos of energy around his exposed wrists. Maris’ last words to his men had been about meeting el Tigre in the South Bronx, and so Jack of Hearts went forth to investigate the Corporation and avenge his father’s death.

In New York, Jack saw the Daily Globe article about a masked vigilante called the White Tiger wanted for murder in the South Bronx, and rashly assumed this was “el Tigre.” He attacked the White Tiger with a vengeance on the Bronx rooftops, using his hand blasts for firepower and as thrust to carry him back to the roof after being tossed off. For his part, the supernatural martial

artist realized how to contain Jack’s blasts by clamping his hands around Jack’s wrists to prevent the energy build-up. The White Tiger’s protestations of innocence eventually broke through Jack’s grief, and he began to doubt his conclusions. So, when the two super-heroes tackled each other over the side of the roof again, Jack of Hearts positioned himself to take the impact, sparing the Tiger’s life. [Deadly Hands of Kung Fu (1st series) #22-23]

Jack of Hearts was taken to the hospital for his broken ribs by White Tiger and his allies Detective D’Angelo and the private eye, Blackbyrd. When the orderlies attempted to sedate Jack and cut his armor off for treatment, however, the Zero Power began to explode out of him. It seemed that only a combination of the armor and Jack’s conscious willpower could keep the Zero Power under control. [Deadly Hands of Kung Fu (1st series) #24] While at the hospital, another Corporation 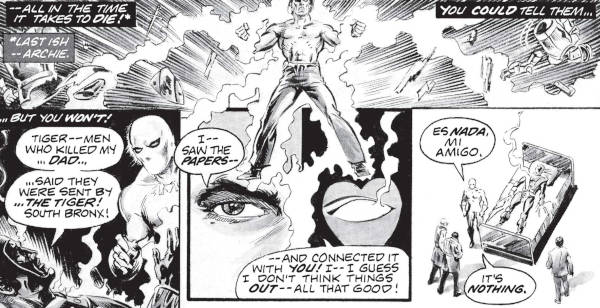 assault group struck in an attempt to kidnap Jack of Hearts and pry the secrets of Zero Fluid from his body. White Tiger and a delirious Jack managed to hold them off, and el Tigre Blanco agreed to pursue the Corporation while Jack recovered. [Deadly Hands of Kung Fu (1st series) #26]

Jack’s metabolism was far stronger than a normal man, and he was fully recovered in a matter of hours. He flew out to the Daily Globe to help his investigation and confirmed “el Tigre” was a freighter out of Chile set to dock that night. Jack of Hearts found el Tigre as the White Tiger also arrived with other allies, Shang-Chi and the Iron Fist. Jack was confronted by Stryke, top agent of 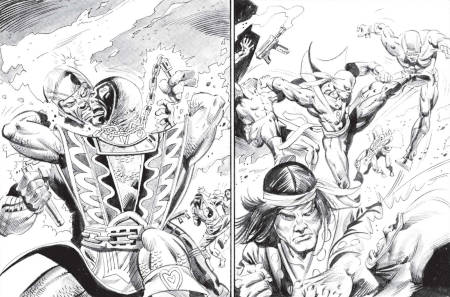 the Corporation’s assault groups, as well as a collection of goons. He blamed Stryke for his father’s death and killed the sadistic mercenary with his Zero Power. Meanwhile, the board of the Corporation had all committed suicide when their attempt at merging their power base with that of Shang-Chi’s father failed. Those responsible for the death of Phillip Hart were gone, and Jack of Hearts was free to pursue his own path in life. [Deadly Hands of Kung Fu (1st series) #29-31]

Jack of Hearts attempted to build a reputation as a super-hero, fighting with criminals in New York City until he learned the Hulk was at large. Seeing an opportunity to prove himself, Jack sought out the Hulk and attacked him in the name of justice. The cocky young hero hadn’t been prepared for the Hulk’s sheer strength, and their battle soon landed on a flaming freighter being towed out of harbor after the fire brigade failed to extinguish it. As Jack struggled to stay ahead of the

fighting-mad Hulk, it finally penetrated Jack’s chainmail-covered skull that the Hulk only wanted to be left alone, and Jack was the one who initiated the brawl. The Hulk was far too mad to listen to Jack trying to call off the fight now, and he kept smashing until the freighter itself gave way beneath them. Jack of Hearts swam back to land, as the incredible Hulk made his own path. [Incredible Hulk (2nd series) #213-214]

Tony Stark had been a trustee for Phillip Hart’s estate, and so Jack had an appointment out on Long Island at Stark International. He arrived to find Iron Man taking fire from the factory’s defenses and flew out to defend Stark from this renegade employee. As it turned out, Stark International had suffered a hostile takeover of dubious legality by Mordecai Midas. While Iron Man and Jack of Hearts brawled, Shellhead cut open Jack’s armor with a saber saw and 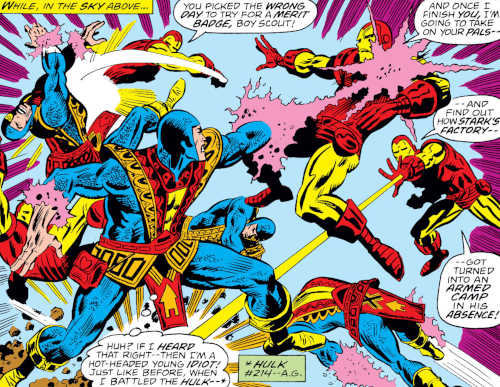 accidentally unleashed his stored up Zero Power, leaving them both dazed by the blast. They crashed into Midas’ newly-minted throne room inside Stark International, and were informed of the takeover. Jack of Hearts and Midas’ unwitting pawn Madame Masque had to hold Iron Man back from attacking the factory’s new legal owner, pressing him to find other means of reclaiming his company. [Iron Man (1st series) #102-103]

Stark International was still one of America’s top defense contractors, and that made S.H.I.E.L.D. tense over Midas gaining control of its technology. Nick Fury and Jasper Sitwell of S.H.I.E.L.D. gathered Jack and several other associates of Iron Man including Guardsman, Wraith, Jean DeWolff and the surrogate Iron Man, Eddie March. They came together to help Iron Man make an extra-legal attempt to find proof Midas had blackmailed his way into a controlling interest at Stark and reclaim his property in the name of national security. Their raid on Stark International fought through Midas’ mercenaries and several animated copies of the Iron Man armor itself, which Midas had procured and reprogrammed. The crusaders were caught off-guard when Midas rigged one of the suits with explosives, flooring all but Iron Man.

Midas seized the advantage and turned Iron Man’s allies into gold with the unique touch of his gauntlets. Jack’s unique metabolism enabled his body to fight off Midas’ effect, transforming him back to normal. He and Iron Man continued the fight against Midas alone, until the telepathic Marianne Rogers arrived and destroyed Midas’ mind with a mental blast. In the aftermath, Iron 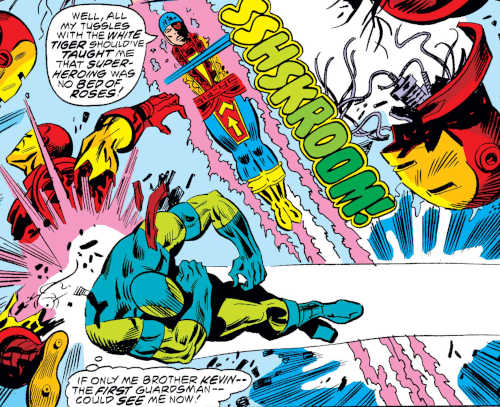 Man called upon Yellowjacket as a bio-chemist to reverse the effects of the golden touch on his other friends. Yellowjacket combined Jack’s powers with a bio-ray restorer, using the Zero Power as an energy source to restore the other heroes to life. Even though a stimuloid called the Growing Man attacked during the procedure, Iron Man held it off and Jack’s efforts succeeded in turning everyone back to normal. [Iron Man (1st series) #104-108]

Jack of Hearts was interested in learning more from a veteran super-hero like Iron Man, and so Shellhead agreed to take him on as an apprentice. His first mission was to discover the origin of

the Growing Man’s attack. Some S.H.I.E.L.D. scientists brought a Scanalyzer to Stark International and planned for Jack’s Zero Power to act as a fuel source for their device as it analyzed the Growing Man. In fact, the Zero Power interacted with the Scanalyzer beyond what anyone had anticipated, as Jack of Hearts assimilated the device’s properties. Jack found he could complete the Scanalyzer’s function mentally, as he permanently developed a computer-like mind able to analyze data and perform vast calculations in a matter of moments.

Iron Man and Jack of Hearts followed Jack’s computations to the moon where they, and the Soviet Super-Soldiers, located an alien egg construct. Jack and Iron Man passed into the egg and were transported across the universe to the fleet of the Rigellian colonizers as they attempted to seize the New Men’s world of Wundagore II. Emerging in the midst of a planetary war, Jack and Iron Man were separated from one another as Shellhead tumbled down to the planet below. Jack’s life was saved in the battle by Rigel’s Observer YJ-14, and he soon learned the Fleet Commander Arcturus was a mad rogue. Arcturus had deliberately separated his battalion from the main Rigellian fleet, and he was willing to break the Rigellians’ sacred oath to Thor never to colonize Earth unless Jack helped conquer Wundagore II. The Observer rejected Arcturus’ dishonor and 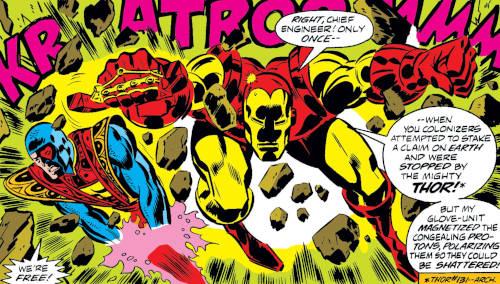 was struck down. Jack reunited with Iron Man, the Super-Soldiers and the Knights of Wundagore to fight against the Colonizers. Eventually, Arcturus was defeated and overruled when a Recorder from the true Colonizer fleet arrived after sensing activity from the transport egg. The Grand Commissioner stripped Arcturus of his rank and title, and the war with Wundagore was declared illegal. All parties departed in peace back to their respectful nations, worlds and starships. [Iron Man (1st series) #109-112]

Jack of Hearts stayed on until Stark International was rebuilt following Midas’ occupation. More confident with his abilities, he thanked Iron Man for the “apprenticeship” and departed to finalize his father’s estate. [Iron Man (1st series) #113]