En Dwi Gast is one of the Elders of the Universe, among the oldest of mortal-born beings in the universe. Each member of the Elders hails from a different species that emerged at the dawn of the Seventh Cosmos. The Power Primordial, the cosmic essence of universal birth itself, was somehow tapped into by each of the Elders. They discovered that the Power Primordial provided them with immortality so long as they wanted to continue living. To facilitate this, the Elders each devoted themselves to a single pursuit or pass-time with monomaniacal focus. As time passed and their own initial races died out, the Elders of the Universe found each other and formed a loose fraternity, referring to each other as "brothers."

En Dwi Gast and another Elder devoted themselves to the pursuit of games, challenges of sport, skill or chance that they participated in personally or gambled on. Initially, En Dwi Gast and his partner were the closest among the brothers, for gaming was a far less solitary pursuit than some of the other Elders' focus. They made wagers together or competed as worthy challengers. And if 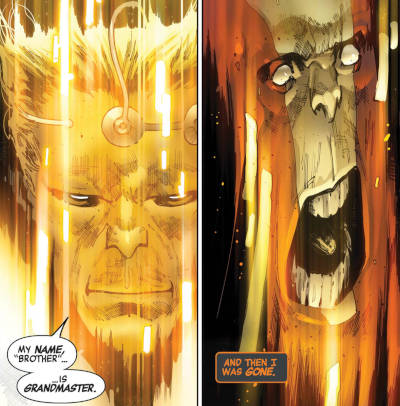 En Dwi Gast's fellow Elder won more often in their competitions than Gast, he at least didn't seem to notice. A turning point in their relationship came when the Elders began adopting titles. Tanaleer Tivan became the Collector, Kamo Tharnn became the Possessor and En Dwi Gast's friend claimed the title of Grandmaster. En Dwi Gast became obsessed with winning the title of Grandmaster for himself and competition with his friend became more heated and less friendly over time. The other Elder felt Gast was going too far with these games, but couldn't back down either. Eventually, the stakes became so high that the loser of a particular game would be banished from reality entirely. Gast won, claiming the title of Grandmaster while his oldest friend was exiled beyond the reach of reality itself. [Avengers (1st series) #679]

Like his brother Elder, the Collector, the Grandmaster also had a family at one point and conceived a daughter, Va Nee Gast. The Grandmaster taught Va Nee all about competition and gameplay, the thrill of the wager and the satisfaction over outplaying one's opponent. As she grew 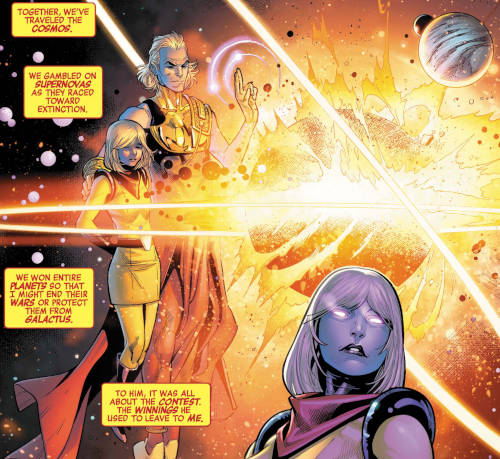 older, Va Nee would sometimes serve as an Ace up her father's sleeve, manipulating the conditions of a game in ways that technically didn't violate the terms of the match. Grandmaster's winnings rarely interested him: it was the thrill of the match that held his attention, not the tangible prizes won from it. As a consequence, he often turned over his winnings to Va Nee after he was done with them, moving on to the next game while occasionally leaving entire planets in her care. [Avengers (1st series) #684]

Come the Modern Age of Heroes, Grandmaster became aware of the planet Earth in a roundabout fashion. The Scarlet Centurion, a divergent version of Kang the Conqueror, challenged Grandmaster to a game on Earth-S against his foes, the Squadron Supreme. The 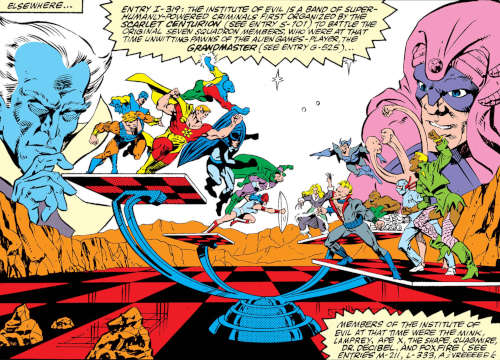 Grandmaster was intrigued and agreed to use the Squadron as his pawns while the Centurion gathered their foes into an antagonist force known as the Institute of Evil. The Squadron Supreme unwittingly served the Grandmaster well, defeating the Institute in single combats without being aware of the overseeing players. Grandmaster approached his champions afterwards and offered them the chance to be his permanent stable of pawns. They refused, but now Grandmaster was aware of Earth and its possibilities. [Squadron Supreme (1st series) #9]

The Grandmaster decided to recreate the Squadron Supreme in his own universe, using the Wellspring of Power to enhance individuals in the likeness of his former pawns. He helped two Earthmen create alchemical potions that gave them powers as the new Nighthawk and Whizzer and modified the Lifestone prison of the Skrull Krimonn into a Power Prism to symbiotically bond with a third Earthman as Doctor Spectrum.  Unable to find a local version of Hyperion, Grandmaster created his own artificial lifeform in Hyperion's image, bestowing false memories and motivation on the nascent being. Thus, the Grandmaster had a Squadron Sinister at his beck and call.

Grandmaster visited the 41st century to find the Scarlet Centurion's alternate self, Kang. The Conqueror mourned the loss of his love Ravonna, preserved indefinitely on the brink of death yet beyond his power to restore to health. Grandmaster appeared before Kang and displayed his power, challenging the warlord to the Game of Galaxies. If he won the wager, Kang would receive the power over life and death from the Grandmaster. If he lost, Earth itself would be forfeit, consigned to oblivion as if it never existed. Seeing the opportunity to revive Ravonna, Kang 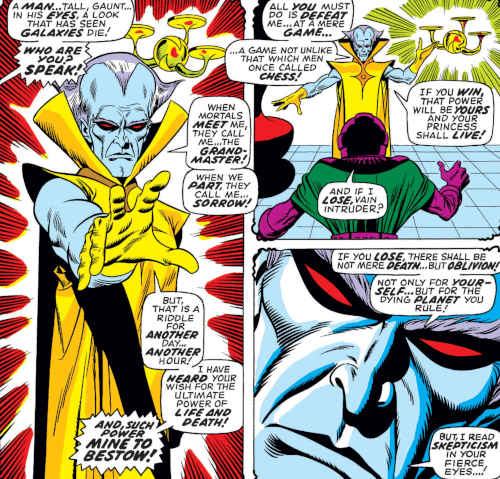 Kang chose his old foes the Avengers as champions to pit against the Grandmaster's challengers. On behalf of Earth and Ravonna, the Avengers reluctantly agreed to fight for Kang, despite his imperious manner in summoning them. In the first round of the Game of Galaxies, four Avengers were pitted against the Squadron Sinister at different points on Earth. Although powerful, the Grandmaster's Squadron proved ineffective against the more experienced Avengers. Captain America, Iron Man and Thor defeated Nighthawk, Doctor Spectrum and Hyperion at their chosen battlegrounds, bringing Kang's forces into an early lead. Outside forces interfered on the final battle, however. Goliath was meant to battle Whizzer alone, but the Black Knight saw the conflict in his local London and innocently intervened on behalf of his Avenger ally. This interference angered the Grandmaster and he declared that round inconclusive before teleporting the pawns away.

In the next round, Vision, Black Panther and Yellowjacket were transported back in time to occupied Paris of World War II. The Grandmaster manipulated the Invaders Captain America, Sub-Mariner and the original Human Torch as his players to confront the unfamiliar Avengers. Despite this, the Avengers once again proved victorious and beat their opponents without permanently injuring them.

Thrilled at the success of his players, Kang demanded the power of life and death from Grandmaster. The Elder agreed Kang had won, but chaffed at the Black Knight's intervention in the first round and declared Kang had not secured total uncontested victory. Therefore, he would

offer Kang temporary power over life OR death, but not both. Kang accepted the reduced spoils and intended to ask for the power of life to restore Ravonna. However, at that fateful moment, the Avengers barged into his chambers. Kang had imprisoned the Avengers in stasis after their victory, but the Black Knight had followed his allies to Kang's stronghold after his earlier mishap and freed them. Now that their role was finished, the heroes demanded Kang return them to their home time.

Ever the impulsive egomaniac, Kang changed his mind and demanded the power of death from the Grandmaster... death for the Avengers! The Grandmaster complied and Kang received the power to drain the Avengers of life. He slowly brought his foes to the brink of death in order to savor their last moments before killing them permanently. The terms of his prize were very specific, however and the Black Knight was not yet an Avenger. Totally unaffected by Kang's

power, the Black Knight struck the Conqueror down and saved the Avengers from Kang's attack. Declaring Kang had failed to use his prize in the time allotted, the Grandmaster removed Kang's power and restored the Avengers to full health before departing. [Avengers (1st series) #69-71]

The Grandmaster was furious over his loss, and made subtle plans for revenge by secretly extracting Ravonna from Kang's stasis chamber, leaving behind a lifelike construct so Kang wouldn't know she had been replaced. Grandmaster restored Ravonna to full life himself and told her the story of how Kang had the opportunity to save her, but chose revenge instead. Ravonna naturally turned bitter towards Kang with this revelation and the Grandmaster trained her for a time in his technologies before letting her out into the world to do what she wished with Kang. [Avengers Annual #21]