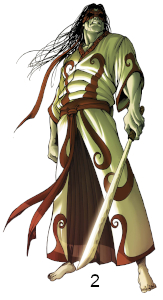 1) In his original role as a Hand assassin, the Gorgon wore a red suit with a white shirt and blue or black tie.  His smoky sunglasses hid his eyes and held back his petrifying stare until he chose to reveal it. [Wolverine (3rd series) #20]

2) After his resurrection, Gorgon took to wearing stylized robes evoking his Japanese heritage. The loose-fitting white cloth was bound in front with a red sash and its flowing design allowed him considerable freedom of movement. The robe had a red trim around the neck, sleeves and bottom, extending into curling red lines that evoked the many arms of the Hydra. Gorgon also wore a red mask obscuring his sight, or occasionally a simpler blindfold. [Secret Warriors (1st series) #2]

–) After the downfall of HAMMER, Gorgon returned to wearing his traditional ninja robes.