Tomi Shishido was born in Kyoto, Japan as a mutant with many gifts, including a rapid developmental intelligence. He said his first words within two weeks, was walking within three months and was an accomplished artist by four years. His mind did not develop comfortably, though, and Tomi had attempted suicide twice before his sixth birthday. A sense of nihilism festered in Tomi's thoughts for years, until by age thirteen he had not only mathematically proven the existence of God, but intended to devote his existence to spiting the same being.

Tomi's mutant gifts grew as he did, and as a teenager he manifested his primary mutation to turn others to stone with a look. Practically (if not morally) hampered by his gaze, Tomi learned how to operate in the world while blindfolded, and became known as the Gorgon. He forged a mutant death cult in Japan known as the Dawn of the White Light. This deadly band of anarchists operated as an extension of Gorgon's beliefs about the world, and grew to support hundreds of mutant followers in four years under Gorgon's command. By his eighteenth birthday, however, Tomi Shishido was still unsatisfied. He knew of the existence of the ancient order of ninjas known as the Hand and wanted to prove himself worthy of learning from these killers and mystics. [Wolverine (3rd series) #26]

Gorgon decided to murder his family as an opening display of his devotion to the Hand. After killing his parents and siblings with his gaze, Tomi was contacted by the Kraken, a mythical Hydra loyalist and fabled recruiter for the organization. The Kraken always had an eye for talent and potential, and also had the charisma to offer recruits what they wanted: "to become what they needed to be." Kraken made quite an impression on the arrogant and nihilistic youth. He appealed 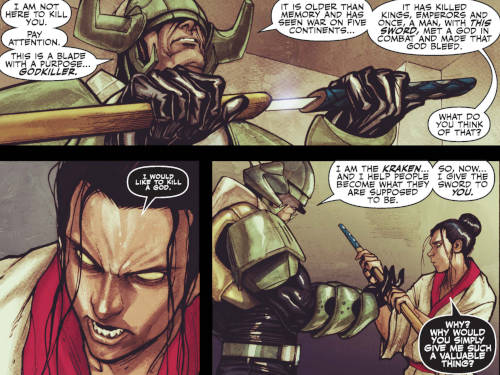 to Tomi's ambitions by offering him a katana blade, forged by the gods and cast with an inherent destiny to be wielded by a mortal in killing a god. Gorgon accepted the Godkiller sword and Kraken's whispers about his destiny, owing a secret loyalty to Hydra that he would privately nurse for many years. [Secret Warriors (1st series) #11]

In the forests of Akamatu, Japan, the blindfolded Gorgon approached the hidden cathedral of the Hand. Instead of using the power of his eyes, Gorgon dispatched the Hand's ninja guards using the martial skills he had already developed. The Gorgon's natural senses and telepathic 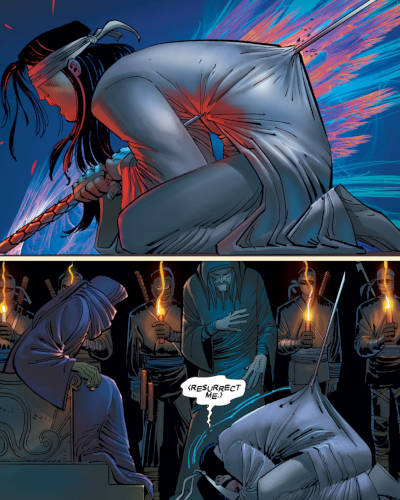 perception allowed him to detect and anticipate his opponents regardless of whether he was blinded or not. He made his way before one of the brothers, allegedly a mystic from the beginning of the Hand's war against God countless ages ago. Gorgon announced his murder of his family and his skill against the ninja as proof of his prowess. The Hand brother acknowledged these facts, but asked Gorgon about his devotion. Tomi Shishido knew the Hand had the supernatural means to resurrect their members if they fell in battle. And so, he stabbed himself through the chest with his katana, asking the Hand to restore him to life if they thought him worthy. [Wolverine (3rd series) #26]

As an assassin, Gorgon proved more than worthy and ascended to the rank of Hand grandmaster within a year. It was presumably during this period that he first met and came to respect the immortal swordsmith, Muramasa. [All-New Wolverine #29] Next, he worked to forge an alliance with Elsbeth von Strucker, Satanist and financier behind the funding of Hydra. Elspeth was the wife of Baron Wolfgang von Strucker, the Supreme Hydra, but while Wolfgang loved chaos in general, Elspeth possessed a deeply rooted and targeted desire to spit in the face of God and destroy all his works. In order to ensure a free hand in Hydra's affairs, she and Gorgon engineered a clone of Baron Strucker as a puppet to use and then later toss aside in the furtherance of their schemes. [New Thunderbolts #17]

The Hand and Hydra came together in a plot to kidnap, kill and resurrect super-heroes using the Hand's magicks, reprogramming them in the process to become assassins for the terror group. 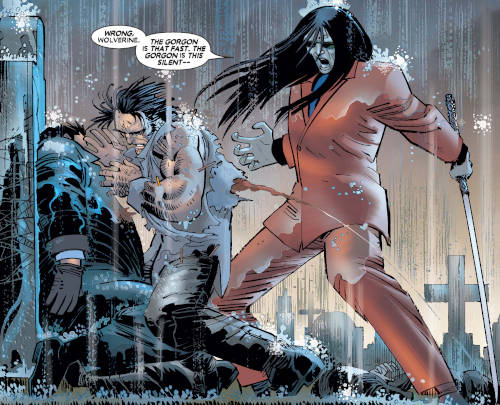 The first target was Wolverine. The son of one of Wolverine's Japanese friends was kidnapped in order to lure Logan into a trap. After tiring himself on a cadre of Hand ninjas, Wolverine was attacked by behind by the Gorgon and fatally stabbed through the chest. After the Hand revived him under their control, Wolverine was left to be found by S.H.I.E.L.D. and brought aboard their nearby aircraft carrier to recover. The brainwashed hero-turned-assassin escaped, causing tremendous damage to the organization on the way out as his first strike.

Over the next several weeks, Gorgon, Elspeth and "Wolfgang" oversaw Wolverine on a series of Hydra missions. He stole blueprints from the Baxter Building of Reed Richards' biggest ideas, attacked Stark Industries and killed several heroes like Hornet and Northstar. He also helped the 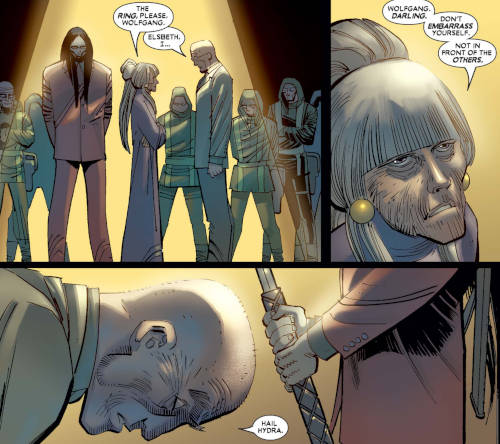 Hand recapture Elektra Natchios to serve them again, and nearly killed the President of the United States. Still, Logan was eventually defeated and taken into custody. This was at least partially planned for, as Gorgon and Elspeth then had "Wolfgang" take responsibility for this failure and submit to execution. Thus, Hydra was now completely under the control of Gorgon and Elspeth. [Wolverine (3rd series) #20-25]

While S.H.I.E.L.D. worked to de-program Wolverine, Gorgon and Hydra changed tactics and began targeting super-villains instead of heroes. Far less organized and coordinated than the hero 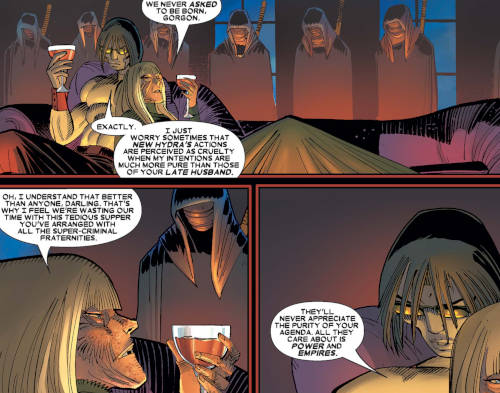 fraternity, the Hand and Hydra managed to kill and revive dozens of villains to their cause, adding the likes of Leapfrog, S.H.O.C., Poison, Slyde, Vibro, Crusader and Spot to Northstar and Elektra. An attack on the S.H.I.E.L.D. Helicarrier brought the flying fortress down and seriously injured Nick Fury, but Wolverine (clear of his brainwashing) was released and managed to dispose of most of the super-villain cannon fodder. Over the next few days, a fighting-mad Logan killed thousands of terrorists, wiping out the Dawn of the White Light and revealing Elektra as a double agent who helped him eliminate the stronghold of the Hand brothers. 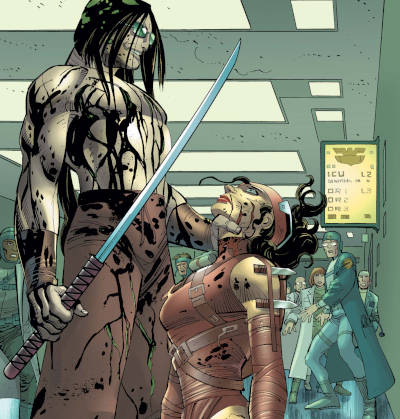 From Elektra's infiltration, they learned the location of all the Hydra bases under Gorgon's control. A surgical blitzkrieg was launched by S.H.I.E.L.D. to eliminate the entire network, and Wolverine and Elektra personally led the strike team that bombed and invaded Gorgon's hideout. Elspeth was killed, but Gorgon proved far more formidable than expected. He killed the S.H.I.E.L.D. team and overpowered Elektra. He took her prisoner and read her mind to learn the location of the Infirmary, the S.H.I.E.L.D. black site hospital where Nick Fury was being treated. Even if he lost his entire operation, the Gorgon could still cut the head off of S.H.I.E.L.D. by eliminating their director.

Wolverine raced to the scene to prevent Fury's assassination and get revenge on Gorgon for his death. Gorgon and Wolverine had a brutal fight through Manhattan real estate, but Gorgon 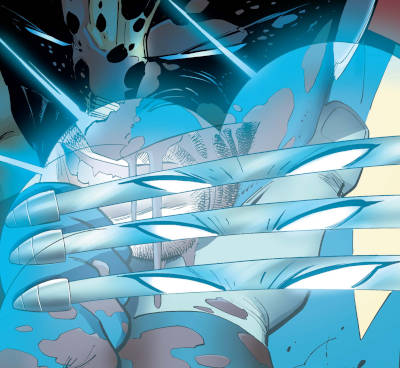 eventually gained the upper hand. He restrained Logan and prepared to unleash the petrifying power of his sight on Wolverine. At the last moment, Wolverine popped his claws and caught Gorgon in the reflection of his own eyes. Like the gorgons of old, Tomi Shishido was turned to stone by his own power, and his petrified body was shattered to pieces by Wolverine. [Wolverine (3rd series) #26-31]