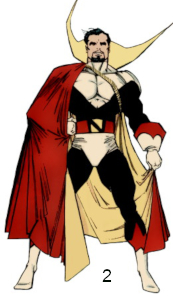 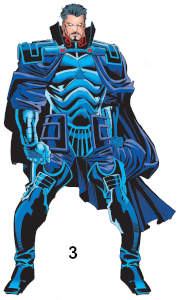 1) A man of wealth and taste, Count Nefaria would wear well-tailored suits even around the ruffians he employed in the Maggia. He favored a three-piece suit with a vest, a monocle, Italian loafers, an operatic cape, and... an ascot? Cravate? That thing with ruffles. [Avengers (1st series) #13]

2) After being empowered by Project N, Nefaria adopted a costume suited to his new strengths. This was a black costume with a white neck and shoulder line, plus white trunks. A red belt had a stylized 'N' on the buckle. He also wore white gloves and boots with red trim and an even more ostentatious red cape with a yellow lining and high collar. [Avengers (1st series) #164]

3) When he returned from the dead, Count Nefaria's power levels were in fluctuation. Possibly as a result, he adopted a more armored costume than previous, for protection during his "down times." In addition to plated armor, gauntlets and high boots, he maintained his sense of style with a high collared cape held by 'N' clasps. [Iron Man Annual '99]

-) Since that time, Nefaria has employed both his operatic and super-villain costumed attires.