Count Luchino Nefaria hails from a long line of European royalty. An Italian citizen, he also had holdings in Monte Carlo, America and many other countries. Nefaria was raised to believe in his own natural superiority to the common people, due to his wealth and pedigree. Therefore, it was only natural that he turn to crime, not for the money but to exert his dominance over others. He began as a financer for a European branch of the Maggia crime families, and also showed great interest in supporting scientific advances. His money, strategic acumen and access to high-tech resources easily guided Nefaria to become the head of his own branch of the Maggia. At its height, the Nefaria family of the Maggia was the most powerful and feared criminal organization in the world, and Count Nefaria was sometimes mistaken as head of the entire Maggia tree of crime families.

Nefaria desired a son and heir to pass his legacy onto in time. However, his wife Renata died in childbirth, leaving him with only a daughter. A chauvinist at heart, Nefaria was disappointed that Gulietta was his only heir, and now he had no wife to raise her. Although he was renowned throughout the criminal underworld, in the public eye Count Nefaria was seen as a legitimate financier. Still, he foresaw the day when his criminal activities might be uncovered, so he concocted a scheme to address both his concerns. Nefaria approached Byron Frost, a Wall Street financier who helped launder the Maggia's money and was in his debt. Nefaria gave his daughter to Frost to raise, just one more asset for him to hold until it accumulated enough value. As "Whitney Frost," Nefaria hoped Giuletta would develop unassailable legitimate connections and background over her life. When the time was right, he could then reclaim his daughter and exploit her good name for the benefit of the Maggia. [Iron Man (1st series) #8]

Despite Nefaria's interest in science and technology, the Maggia was still a largely traditional gang of mobsters. Therefore, they soon became outclassed due to the rise of the super-heroes. The Avengers in particular started interrupting Maggia operations in New York. After punishing his subordinates for their failures, Nefaria decided to address the Avengers problem. He made a 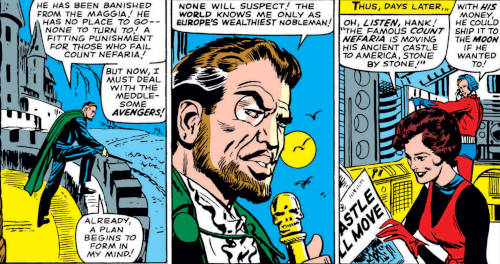 public spectacle of transporting his entire family castle stone by stone from Europe to the New Jersey palisades, and announced a massive charity event to benefit the less fortunate. Count Nefaria invited the Avengers to attend the event as his guests in order to drive up donations and support. Naturally, the heroes could not refuse.

Once the Avengers were at his castle, Nefaria subjected them to time dilation rays, which left them in a trance and unaware of the passage of time. He then used realistic images of the Avengers to demand the United States surrender to their authority. The Avengers were branded as traitors to America and, by the time Nefaria released them with apologies about the charity event being delayed, the heroes were public enemy #1. Rick Jones and the Teen Brigade had been waiting for the Avengers at Nefaria castle, and the count threw them into the dungeon once they got suspicious. When they couldn't get a hold of the Brigade, Captain America and the Avengers connected their current problems to Nefaria and returned to the castle. The Brigadiers

were freed by the Avengers and Captain America tricked Count Nefaria into confessing in the presence of an American general. Nefaria's criminal enterprise was uncovered and he was deported back to Europe to face the Maggia for his failure. [Avengers (1st series) #13]

As he once predicted, Nefaria's public veneer of legitimacy had fallen, and now he was recognized as a criminal. Around this time, Byron Frost passed away. Whitney Frost was now in her 20's, an innocent socialite engaged to a high profile lawyer named Roger Vale, with dreams of Congress. Count Nefaria revealed himself to his daughter, with a recorded statement from Byron Frost unveiling that her entire life had been a lie. Whitney was crushed by the revelations and 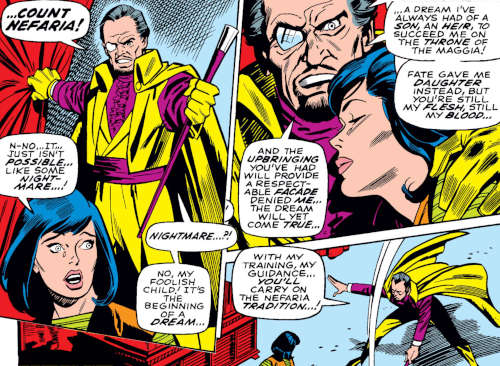 rejected her criminal father. Nefaria gave her time to adjust to her new circumstances, for he knew her "respectable" peers would not accept her if they knew the truth. Sure enough, Roger ended his engagement with Whitney when she told him what had happened, in order to maintain his own image. Distraught and with nowhere else to go, the Countess Gulietta Nefaria returned to her father and began training to join the Maggia at his side. [Iron Man (1st series) #8]

In order to seek revenge on the Avengers, Count Nefaria financed a dream engine which allowed him to manipulate the subconscious minds of others. Styling himself as the Dream Maker, or Dream Master, Nefaria planned to strike at his foes from afar. By drawing his victim into a dream scenario, Nefaria hoped to get his victim to drop their guard, unaware that if they died in their dreams they would die for real. The Dream Master targeted Iron Man first, making the Avenger face a parade of former foes attacking him when he fell asleep. Nefaria made sure to reinforce that this was a dream repeatedly in the scenario. However, he hadn't counted on Iron Man's fighting spirit, and the Armored Avenger refused to relax or give up even in a dream. Iron Man defeated all his imaginary foes, and the feedback destroyed Nefaria's machinery and nearly did him in as well. [Tales of Suspense #67]

Count Nefaria changed tactics, and decided to come at Iron Man from a different angle. Tony Stark's ne'er-do-well cousin Morgan Stark was deeply in debt to Nefaria's casino in Monte Carlo. To repay what he owed, Morgan was recruited by Nefaria in a scheme to discredit Stark and drive him mad. Nefaria and Morgan used a visio-projector to make Stark believe he saw alien spacecraft and airships, but the vessels disappeared whenever he brought them to someone

else's attention. Nefaria intended to damage Stark's public image and deprive him of lucrative military contracts, weakening both Stark and the U.S. government. Miraculously, however, an actual alien invasion took place during one of Morgan's image shows. Iron Man fought off the invaders and Morgan was forced by circumstances into backing up the Avenger's account, vindicating Tony Stark and ending Nefaria's scheme. [Tales of Suspense #68]

Nefaria's control of the Maggia had weakened considerably following his various defeats. He decided to make a daring gambit in order to recoup his losses and reestablish his superiority among the crime family. Nefaria recruited a team of super-villain enforcers including Unicorn, Porcupine, Eel, Plant-Man and Scarecrow. His agents used Nefaria's image technology to lure out the outlaw heroes the X-Men and capture them. Next, Nefaria cast an impenetrable crystalline 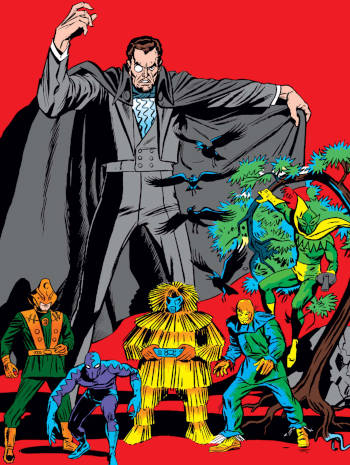 dome around Washington D.C., taking the nation's capital hostage. As he previously did with the Avengers, Nefaria used images of the X-Men to deliver his demand for one hundred million dollars to Congress. If the ransom was not paid, "the X-Men" would extract all the oxygen in the dome in three hours. Nefaria boasted to the captive X-Men what he had done in their name and suggested they serve him for real, now that their reputation was tarnished.

The X-Men freed themselves from Nefaria's dungeon but, at the telepathic direction of Professor Xavier, they accepted Nefaria's offer for employment. Count Nefaria accepted these new servants, but made a point of telling them the controls for the dome were programmed for his touch alone, and could not be shut down otherwise. Nefaria sent the X-Men through the dome to pick up the ransom, but Unicorn and the villains double-crossed him and tried to steal the briefcase of certificates from the X-Men. Marvel Girl escaped the villains and the National Guard to bring Nefaria the money. She tried to force him to drop the dome before handing over the briefcase, but instead Nefaria only stopped the oxygen-extraction effect, set on a timer to restart if he didn't escape unmolested. Professor X arrived and used his telepathy to divine how to shut down the dome, however, and so Nefaria fled. When Count Nefaria reached his escape yacht, he discovered Xavier had used Nefaria's own image technology to create a false briefcase. The count had no ransom and was soon picked up by the harbor patrol, with Washington safe and the X-Men's reputation restored. [X-Men (1st series) #22-23] Count Nefaria was sent to prison. As he intended, Whitney Frost assumed his place as head of the Nefaria family in the Maggia, under the alias of "Big M." [Tales of Suspense #97, Iron Man (1st series) #8]