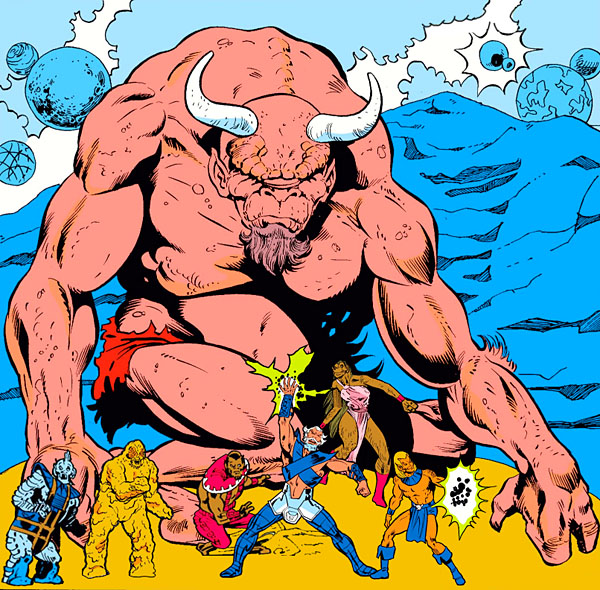 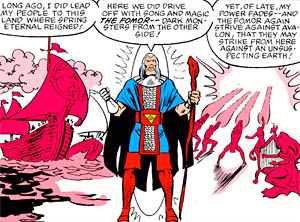 Thanks to the scrying powers of Elathan, the Fomor war council observed Amergin summon the Avengers to the past. Elathan was not worried about the Avengers appearance, seeing his side as superior to these heroes. Cethlann questioned his leadership and thought they lacked insufficient power to challenge Amergin and the Avengers. It was put to a vote and all other members of the Fomor agreed with Elathan's plan to attack. Cethlann argued that they should release her husband Balor, as with his added power the battle would surely be in their favor. She received no support from the other members of the Fomor. Elathan's son Bres advised that his second sight had foretold their victory (a lie, as revealed later). With the war council in agreement, Elathan transported them to Amergin's tower. Using his weather manipulating abilities, he shattered the top of building, bringing the battle to the Avengers, Amergin, and the Black Knight. Several players would use the distraction of the battle to their benefit. Bres snuck into the tower and used the gateway that transported the Avengers to the past to travel to the future. Amergin used his magic to construct a weapon called the Evil eye of Avalon, which he hoped to use to siphon the power of the Fomor and use it against them. Cethlann also took this opportunity to free her husband Balor from captivity. The two most powerful Avengers present, Thor and She-Hulk, immediately engaged Balor but both appeared to be vaporized by his optic blast. As this happened, Bres appeared in the future in Avengers mansion with a unconscious Dr. Druid and Iron Man. [Avengers (1st series) #225] 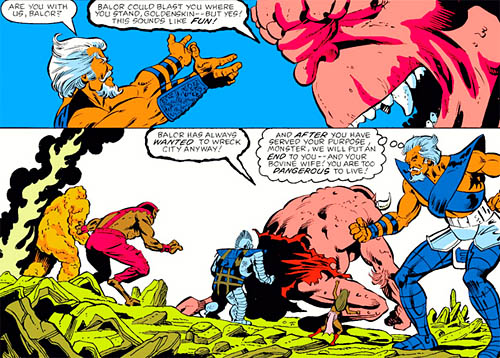 Bres intended to kill Dr Druid, whose magicks were responsible for maintaining the Avengers presence in the past when She-Hulk and Thor appeared next to him. Balor's blast had disrupted the spell that had brought them to the past and returned them to the present. Figuring out Bres' vulnerability to metal, She-Hulk hurled the unconscious Iron Man at him, knocking Bres out. With the presence of Balor, the remaining Avengers were easily overwhelmed by the Fomor and forced to retreat. Elathan decided to try and take advantage of Balor's sudden freedom and attempted to convince him flght alongside the other Fomor against Amergin and Avengers. Seducing Balor with the prospect of conquering Earth, he agreed to the alliance despite the two gods fraught history and Balor's own wife, Cethlann warnings that Elathan was not to be trusted.

As the Fomor breached the walls of Avalon, Amergin appeared brandishing the Evil Eye. He tricked Balor into attacking and charging up the weapon. While Amergin and Balor battled, the remaining Avengers appeared and distracted the other Fomor long enough for 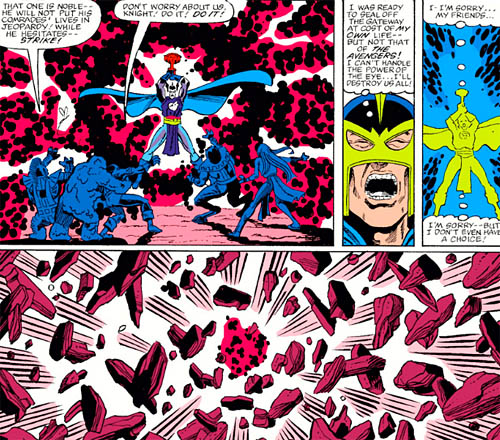 Amergin to drain most of Balor's power. Distracted by Elathan, Amergin lost his grip of the weapon and Balor took it and started to rub it against his eye, hoping to return his powers. Touching the source of its power forced the weapon to interact and it appeared to incinerate Balor. The shock wave from the blast also killed Amergin. The remaining Avengers made the decision to retreat back to the future through the gateway but were pursued by the Fomor, who also tried to access the gate. The Black Knight, brandishing the evil eye, held the line so his allies could escape activating the weapon, destroying the gate and presumably killing the remaining members of the Fomor war council. [Avengers (1st series) #226]

Note: All Fomorians had the following the base abilities. Immunity to disease, resistance to injuries, self-healing, resurrection of fallen peers (may need to be done jointly), immortality, flesh roughly three times denser than average human, superior strength to lift between 25-35 tons.

They appeared to have a weakness to "iron/metal” and more unusually hatred of high frequencies.

Balor (God of the Sun)

Elathan (God of the Sky)

Bres (God of the Mischief)

Additional powers: None shown, given her title she likely had some ability to see the future.

Dulb (God of the Weaponry)

Additional powers: Dulb wields a magical weapon (presumably of his own creation) the Tathlum balls, the balls had a homing feature and upon hitting their target they would explode and emit an energy blast.

Indech (God of the Earth)

Additional powers: Indech was an amorphous creature who could reshape his body at will. The consistency of body appeared to be sticky as Cethlann got stuck in him after being thrown at him by Captain America.

Tethra (God of the Sea)

With 772 Issue Summaries online, chances are you may not have read the following Issue Summary: