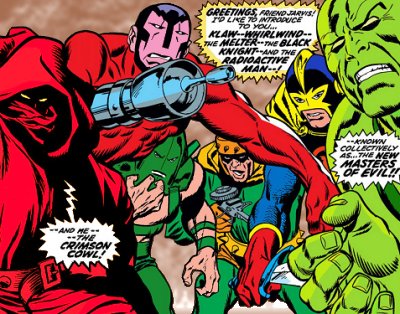 After achieving sentience, Ultron wanted to strike at his creator Hank Pym in disguise. Cloaking himself as the Crimson Cowl, he created a new incarnation of the Masters of Evil to attack the Avengers and his hated father.

Powers: exposure to a massive amount of specific-particle radiation turned him into a living nuclear reactor, able to sense sources of radioactivity, augment his physical strength, release ambient radiation to cause nausea, sickness, and cellular decay in others, drain radioactivity from his environment, generate incinerating heat and blinding or hypnotic flashes of light, and channel hard radiation into focused concussive energy, protective force screens, or explosive charges

Powers: ray projector devices generate microwave frequencies and magnetic induction fields to break down the molecular bindings between the atoms of different substances, allowing him to alternately liquify metal, stone, wood and flesh, wore minor melting rays around his helmet

Powers: mutated by a Vibranium sound converter into a being of solidified sound waves, giving him superhuman strength and endurance, sonic-imaging perceptions, the power to reconstitute his body from any amount of damage, and absorb external sound waves and vibrations that his sonic-claw converts into concussive blasts, high-decibel shrieks, and tangible energy projections of sonic force

Powers: mutant with superhuman reflexes and able to rotate himself at phenomenal speeds, allowing him to spin at high velocities to propel himself forward, deflect projectiles, direct jet streams of hurricane force wind, and create small tornados

Powers: carries the Ebony Blade, a magically indestructible sword forged from a meteorite by Merlin, able to slice through virtually anything, deflect energy or absorb and rechannel it through the blade, and disrupt magical spells and enchantments on contact, infused with a blood curse, formerly rode an atomic steed and two other flying horses, Aragorn and Valinor