MASTERS OF EVIL I 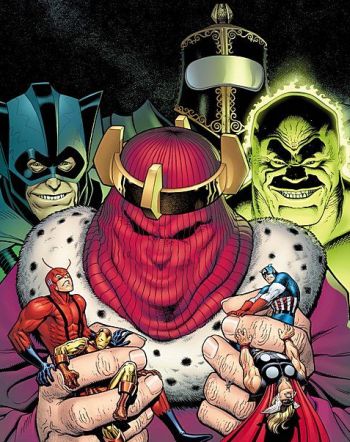 Infuriated when he learned of the survival of his arch-nemesis, Captain America, Baron Zemo assembled a team of villains made of the Avengers' greatest foes to become the first Masters of Evil.

Powers: ray projector devices generate microwave frequencies and magnetic induction fields to break down the molecular bindings between the atoms of different substances, allowing him to alternately liquify metal, stone, wood and flesh, wore minor melting rays around his helmet

Powers: exposure to a massive amount of specific-particle radiation turned him into a living nuclear reactor, able to sense sources of radioactivity, augment his physical strength, release ambient radiation to cause nausea, sickness, and cellular decay in others, drain radioactivity from his environment, generate incinerating heat and blinding or hypnotic flashes of light, and channel hard radiation into focused concussive energy, protective force screens, or explosive charges

Powers: genetics and engineering genius, carries a paralyzer pistol that releases a nerve gas that sends others into a coma and a power lance equipped with .45 caliber machine guns, white-hot metal rings, bolas, lasso rope, and is capable of firing high-temperature flames, lightning-like bolts, and concussive blasts of energy

Powers: Asgardian goddess with superhuman strength, endurance, and resistance to physical injury, sorceress able to fire mystical force bolts, teleport through time and space, shield herself from attacks, rearrange molecular structures, and conjure up spells, has devoted the majority of her magicks to increasing her allure, enabling her to attract any man at first glance, seduce him through potions and an enchanted gaze, and make him her love slave through a single kiss

Powers: Asgardian/Frost Giant demigod with superhuman strength, endurance, vision, and resistance to physical injury, carries an enchanted battle-axe which can disrupts magical spells and cleave between the fabric of space/time, opening portals between dimensional planes for personal travel or to summon energies from other places such as intense arctic winds or blazing flames

Powers: Lord of Limbo and Master of Time, able to remotely observe the passage of all history, travel from timeless Limbo to any point in the timestream, freeze or accelerate time relative to others, and summon and command Dire Wraiths, Space Phantoms, Tempus, and other agents of Limbo under his control