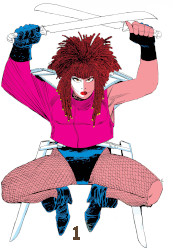 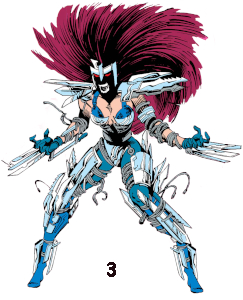 1) Typhoid's original costume was a black, one-piece swimsuit worn over a pair of fishnet stockings, torn on the left knee. She wore a puffy, pink jacket over the suit, with metal shoulder pads, a missing left sleeve and the name 'Mary' on the backside. She wore black boots and black gloves, with the left glove being fingerless. Finally, a belt around her waist held the scabbards for her trademark machetes. Typhoid typically teased her hair, wore heavy makeup and white face paint on her ride side to distinguish her from Mary. [Daredevil (1st series) #254]

2) Typhoid later adopted an even more seductive look, wearing nothing but a black leather studded corset and underwear. She also wore leather-studded bands up and down her arms and legs, with stockings attached to her leg bands. Sometimes Typhoid modified this look with solid black leggings and keeping Mary's unbound wrap dress draped over her shoulders. [Marvel Comics Presents (1st series) #112]

3) Bloody Mary didn't have a traditional costume, but modified whatever Typhoid or Mary were wearing to suit her needs. She often skewed more conservative than Typhoid and would telekinetically manipulate metal and raw materials to formulate armor for her protection. [Marvel Comics Presents (1st series) #150] 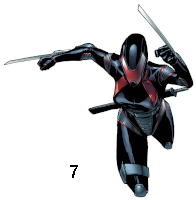 4) For Typhoid's next look, she wore a (relatively) conservative blue-black body suit with shoulder pads and an inverted triangle chest window. One leg was covered with fishnet stockings and an ankle boot, the other with a thigh high boot held up by a garter belt with a heart on it. She wore a glove on one hand and spiked leather bands around the other. [Spectacular Spider-Man (2nd series) #213]

6) As she returned to Kingpin's employ, Typhoid cropped her hair short and wore a headband to keep it out of her eyes. She wore a leather jacket with no shirt, revealing her chest and a tattooed symbol on her navel resembling a jagged diamond atop a circle. She also wore leather pants / booty shorts with fishnets, depending on which leg you're looking at. [Daredevil (2nd series) #46]

7) As Mutant Zero, Mary wore an all-concealing blue-black suit of armor. The visor on her mask is in the shape of a red translucent 'X'. The suit had red bands along her shoulders and ridged flexible portions at her joints to facilitate ease of movement. There was also a retractable blade in each forearm of her gauntlets. [Avengers: The Initiative #4] 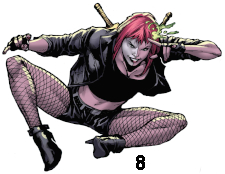 8) While working from Shadowland, Mary wore relatively normal clothing. She appeared in a black tank top, black shorts or miniskirt, fishnet stockings, black boots and fingerless gloves. She also wore a leather jacket and sheaths for her swords on her back. [Daredevil (1st series) #509]

9) As a member of the Sisterhood, Typhoid Mary mixed several of her past looks, adding some asymmetry to her costume again. She wore a blue or white corset top and leather pants, with the left leg cropped as shorts. She wore torn fishnets under her pants and a tore fishnet top under her corset. Typhoid also had black boots, fishnet gloves, a waist-length leather jacket, a choker around her neck. [X-Men (4th series) #7]