Doctor Deidre Wentworth was a brilliant scientist, educated in a variety of fields including 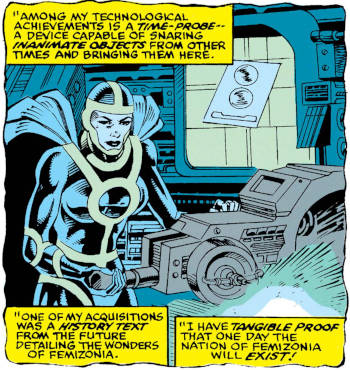 genetics, biochemistry, architecture, metallurgy and theoretical physics. She was also a militant feminist who believed in the absolute superiority of women over men. Her beliefs were seemingly confirmed when she developed a time probe, allowing her to mine potential future timelines. She witnessed Femizonia, the possible future where a nation composed entirely of women arose after a cataclysm devastated the planet. Deidre was inspired by these revelations and somehow confirmed for her own satisfaction that Femizonia’s ruler, Thundra, was her future descendent. With the help of technology and bio-enhancement procedures she personally developed, Wentworth crafted a powered identity as Superia, and dedicated herself to bringing about the rule of Femizonia centuries earlier than the original timeline.

Superia established her own secret island base, dubbed Femizonia, and a private army of women to serve her. In addition to soldiers, she made several choice recruitments such as the criminal scientist Deadly Nightshade and leasing the services of M.O.D.A.M. from A.I.M.  After gathering her initial converts, Superia expanded her recruiting pool to include virtually every female super-villain on Earth. She extended invitations to super-women from multiple continents, bringing together dozens of them with the promise of $100,000 and a cruise aboard the S.S. Superia. 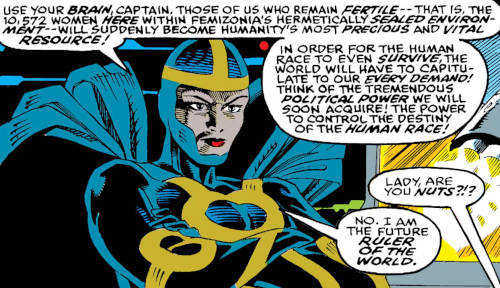 Once they reached Femizonia, Superia had them brought inside the island’s shielded dome, screened from detection by the outside world. Superia’s daring plan was to unleash a biological weapon in the atmosphere that would render every woman in the world sterile… except for the thousands of super-villains and normal women on Femizonia, protected behind the hermetically sealed environmental dome. Femizonia would immediately become a dominant power on the world stage, possessing access to the only women in the world capable of bearing children.

Superia’s plans were opposed by Captain America and Paladin, who had boarded the S.S. Superia in search of Cap’s occasional ally Diamondback, brought aboard by M.O.D.A.M. Diamondback and her friends, Asp and Black Mamba, aided the men in escaping Nightshade’s lab, but Cap was too late to prevent Superia from launching her rocket. He tried calling the Avengers to intercept the rocket, but his transmission was interrupted by Superia. Left with no other option, Captain America goaded Superia into single combat to prove women were better than men. He provoked her towards the edge of the island, repeatedly taunting her to raise her anger level. Finally, Superia unleashed the full force of her concussion blasters at the Captain, who reflected the raw power off his shield and into the island’s dome. Cap forced the scientist in 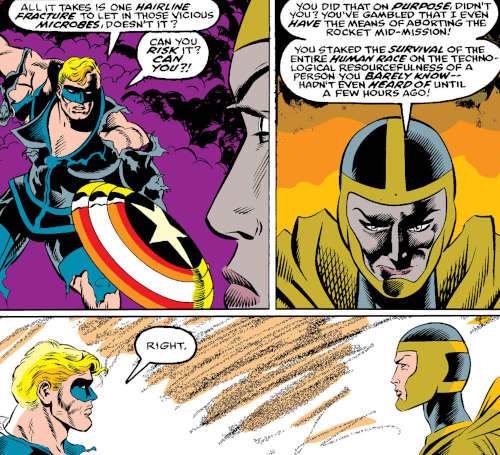 Superia to calculate the risk that her dome was damaged enough to allow even the smallest microbes from her biological weapon to seep in, gambling that she had the means to abort the rocket’s payload in mid-flight. Silently acknowledging she had been outplayed, Superia left Captain America and returned to her base to neutralize the rocket. [Captain America (1st series) #387-392]

Undaunted, Superia continued her efforts on behalf of women supremacy. She took out a bounty on the heads of Asp and Black Mamba for their involvement with Captain America, although it was hardly a personal vendetta and seemed to be a formality. [Captain America (1st series) #394-395] Superia instead focused her attentions on A.I.M. Island. The Advanced Idea Mechanics had recently given up their role as science terrorists, instead working for profit as arms dealers for any nation or individual who could pay. They assumed control over the island nation of Boca Caliente, adopting a thin façade of legitimacy. Superia believed A.I.M.’s resources would be better put towards different ends. Her ends.

Superia traveled to A.I.M. Island during their weapons expo with her loyal Femizons Snapdragon, Iron Maiden, and Jackdaw. Under the ruse of business dealings, Superia asked M.O.D.A.M. to arrange a meeting with Alessandro Brannex, A.I.M.’s current CEO. She coldly blasted through his chest with her concussive beams, but taking over A.I.M. would not be so easy. Brannex was actually the nigh-invincible Super-Adaptoid and, while M.O.D.A.M.’s services were for rent, her loyalty remained firmly with A.I.M. Superia was defeated by the Mental Organism Designed for 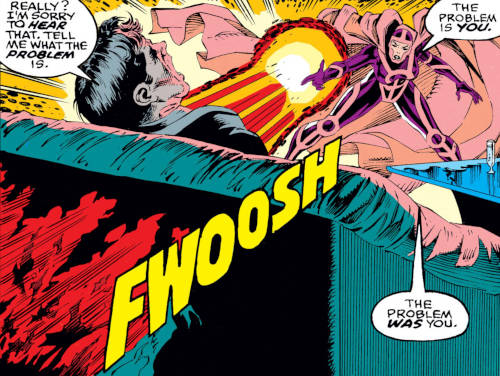 Aggressive Maneuvers, who prepared to cast Superia into the ocean around Boca Caliente. She survived, but only thanks to the intervention of Captain America, who was on Boca Caliente for other business with Diamondback. Superia fumed over owing her life to a man, and also learned her bodyguard Snapdragon had been killed in her absence by Diamondback, settling an old feud. [Captain America (1st series) #411-414]

Superia maintained a public façade as Deidre Wentworth with the Glasser Institute of Contemporary Psycho-Physiology, a front through which her female followers around the globe could connect with her, and vice versa. Superia had developed a new form of bio-enhancement and needed to test it on the appropriate physical, mental and psychological subject. One of her contacts, Professor Susanne Polukort of Hayden College, responded to Superia with the perfect candidate. Cathy Webster was an honor student of Professor Polukort’s, who was otherwise unassuming and lacked any athletic skill. She was convinced to undergo Doctor Wentworth’s self-actualization treatment, thinking it was a sleep study using subliminal programming.

Cathy developed remarkable stamina and physical prowess in a short period of time. Wentworth intended to use her as a spokesperson for the effectiveness of the program, selling it to other women around the world. Superia overplayed her hand by using actual subliminal tapes in her process, feeding aggressive and misanthropic messages into Cathy’s subconscious. After feeling 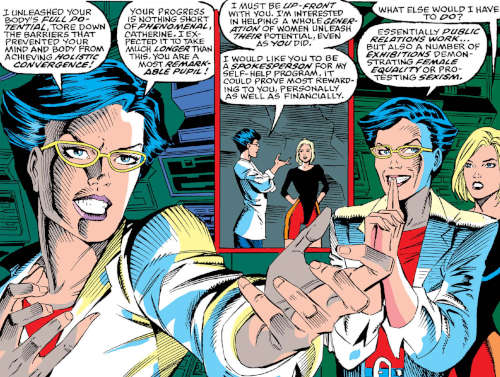 compelled to put on a disguise and physically attack a frat house, Cathy realized she was being influenced. Superia had already abandoned the Glasser Institute front when Cathy returned and discovered the anti-male tapes. As the Free Spirit, Cathy chose to oppose Dr. Wentworth instead of joining her cause. [Captain America (1st series) #431]

Next, Superia’s network of women in power brought her to Baroness Heike Zemo in Mexico. The Baroness was eager to acquire Superia’s enhancement process for her adopted children, the next generation of Zemos. Superia was adamant the process could only be used by women, for women. She was amused at how Heike had subverted the patriarchy of the barony for herself, but was insistent that Heike’s husband Helmut be eliminated before her secrets could be shared. 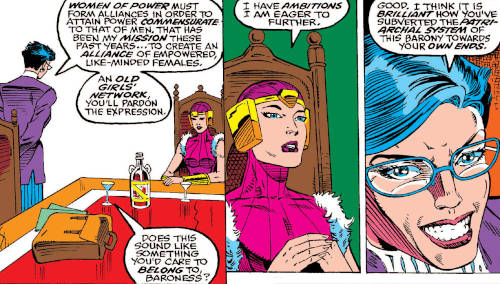 Heike was apparently loyal to her husband but was also willing to string Superia along in order to gain access to her resources. However, Helmut was eavesdropping and feared his wife’s betrayal, so he snared Superia and Heike in his dungeon. Heike convinced Helmut of her loyalty, but they were at a loss on how to convince Superia to part with her process at this point.

Yet again, Captain America and Diamondback just happened to be nearby hunting Zemo. Diamondback found Superia alone in the dungeon and Superia tried to barter for her freedom. She accused Diamondback of “theft of service” for killing her bodyguard Snapdragon, who still had four years on her contract. Diamondback hadn’t been in her right mind when she did the deed and had been suffering with guilt ever since. The sense of justice Diamond inherited from Cap was challenging her, as she was unable to turn herself in for punishment by any lawful government, since the crime occurred on Boca Caliente. Superia pressed further by revealing she knew Captain America was dying due to the Super-Soldier Serum breaking down in his system, and Superia might be able to cure it. Their negotiations were interrupted by Free Spirit, who had 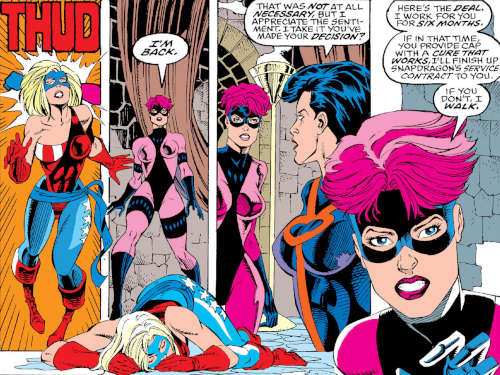 also tracked Superia to Mexico, but Diamondback ultimately knocked Spirit unconscious. Diamond made a deal to work for Superia for six months. If Superia’s brilliance at bio-chemistry came up with a cure for Cap’s condition in that time, Diamond would serve out the rest of Snapdragon’s contract. [Captain America (1st series) #432-433]

Superia was true to her word and, within a month’s time, had concocted an anti-serum for Captain America’s deterioration. [Captain America (1st series) #439] She had her own plans for how to deliver the antidote to him, however. Superia leaked word to Captain America that A.I.M. was experimenting with Cosmic Cube energies on Boca Caliente, prompting him to organize an assault on the island. Superia intended the Captain to be a distraction for A.I.M. so she and Diamondback (now garbed as Snapdragon) could enter covertly. There were distractions aplenty to go around, as the Avengers also came to the island independently of Captain America’s squad, and the Red Skull lurked in the shadows seeking to claim the Cosmic Cube’s power for himself again.

The Captain’s time was running out, and Superia crossed paths with her foe after infiltrating the island, collapsed and helpless due to his condition. She administered a diluted version of her anti-serum first, giving him a few hours of full health as a tease for what a complete dose could do. Superia tried to bargain with Cap, demanding a debt of honor to be fulfilled at a later date in 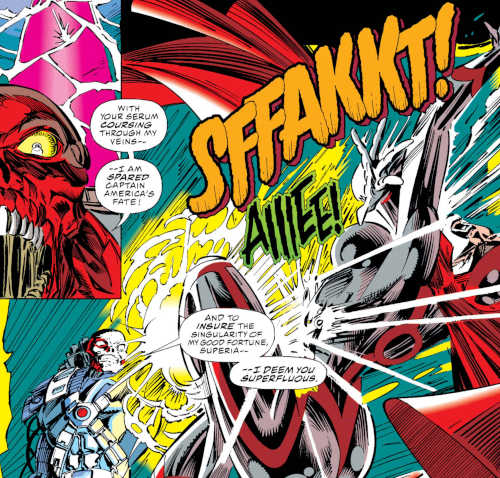 exchange for saving his life. Captain America refused to trust her and tossed aside her cure, inadvertently sending it into the arms of the Red Skull. The Skull’s current body was a clone of Captain America’s, so he gladly administered the cure to himself. To ensure he survived while his hated enemy died, the Red Skull seemingly murdered Superia with a blast of his weapon gauntlet, leaving her unable to produce any more anti-serum. [Taking A.I.M. crossover]