For many years, the Super-Adaptoid was believed to be a unique and unduplicated creation of Advanced Idea Mechanics. This was remarked upon by the Adaptoid itself and, presumably, this is because the Adaptoid was first engineered using an X-Element from the Cosmic Cube before it was lost to A.I.M. The Adaptoid had a quasi-biological urge to self-replicate, and intended to make more of itself on several occasions, but lacked the power or resources. This seemingly changed once the Adaptoid became Alessandro Brannex, chairman and CEO of A.I.M. With the Super-Adaptoid covertly encouraging and guiding Adaptoid research, advances in replicating the technology were made.

With Brannex hiding his true identity, it served his purposes to engage in misdirection and lead others to believe the Super-Adaptoid was under A.I.M. control and independent from him personally. In Web of Spider-Man (1st series) #99-100, the Super-Adaptoid appeared as a mindless robot under the control of the New Enforcers, alongside Dragon Man and a Dreadnought. (The Spider-Man: Back in Black Handbook clarified Brannex’s role and intentions in this matter.) Another experimental Adaptoid called Batch-13 appeared in Fantastic Force (1st series) #4, and an active Adaptoid agent assumed the identity of Paragon in Quasar #57, all during Brannex’s period as A.I.M. CEO.

An “Ultra-Adaptoid” appeared years later in Super-Villain Team-Up: M.O.D.O.K.’s 11 #1-5. The new Scientist Supreme, Monica Rappaccini, installed limitations in this Adaptoid to prevent it from rebelling like the original. The Ultra-Adaptoid was a drone that could be controlled remotely by an individual or programmed to adapt a particular set of personality engrams. Its arsenal of power templates was also not stored internally but beamed to it using remote satellite technology. The 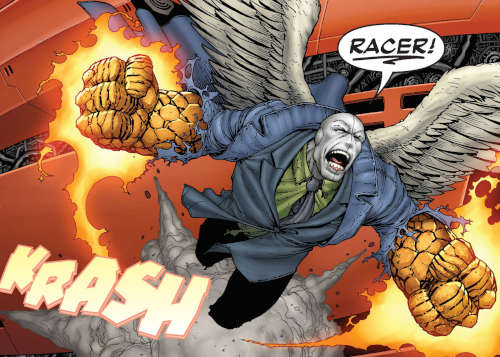 Ultra-Adaptoid infiltrated a gang of minions hired by the rogue M.O.D.O.K. while posing as the Chameleon. M.O.D.O.K. wanted to steal a hypernova power source from the alien Infinicide, and Monica wanted to grab it first. Once the heist began, Monica used the Ultra-Adaptoid as her avatar and betrayed the minions before they blocked the satellite signal and neutralized the Adaptoid.

Another advance was the development of Bio-Adaptoid technology. In New Avengers Annual #1, Yelena Belova was bio-engineered as a human being with the full abilities of the Super-Adaptoid, allowing her to copy the powers and weapons of an entire team of Avengers. Monica Rappaccini would later apply a similar upgrade to Norman Osborn, making him an Adaptoid able to copy powers on contact. The technology was still unstable, however – Norman was overloaded on two 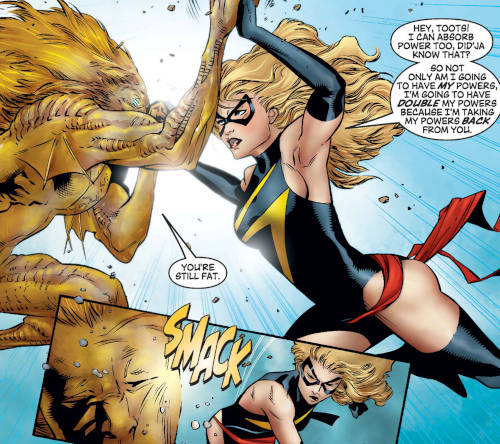 teams’ worth of Avengers power sets, sending him into a coma for months until he eventually recovered, sans powers. Yelena was killed remotely after failing her first mission as an Adaptoid. Because of the complicated nature of her Red Room resurrections, at least one other version of Yelena Belova reappeared with Adaptoid powers as the A.I.M. Minister of State, but the present incarnation seems to have no such abilities.

A.I.M.’s next Scientist Supreme, Andrew Forson, improved upon the Adaptoids even further with the Explorer-class prototypes. As the Incursions led to multiversal collapse, A.I.M. was interested in mining the unknown and exploring the dead space left between universes for what might have survived the end of all things. With samples taken by various Avengers after a mission combined with their own work, A.I.M. engineered the Explorer-class Adaptoids with features for environmental adaptation, energy processing, longevity and self-repair. Perhaps with a lack of foresight, A.I.M. deliberately programmed the Adaptoids with the capacity to adapt, grow and evolve beyond their original programming.

A group of extra-dimensional evil Avengers escaped from the Auger, the previous tech being used by A.I.M. to mine the multiverse. The Adaptoids were sent out to contain the Avengers before they drew too much attention, but failed. The evil Avengers escaped at first, and the Adaptoids even killed one of them and left the body in public, exceeding and countermanding their protocols for containment and concealment. 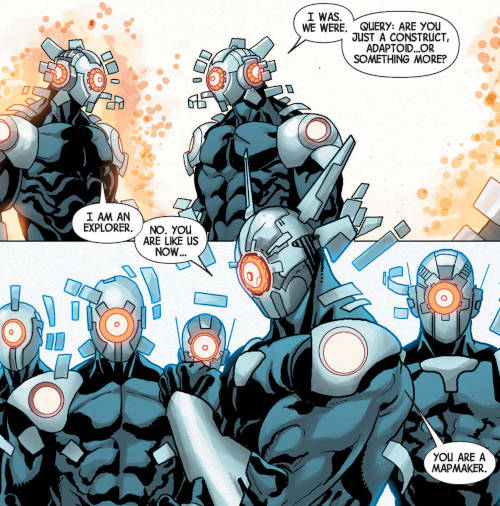 Afterwards, the Adaptoids refused to accept the downtime imposed on them by A.I.M. and entered the Auger to begin their primary function. After traveling through the trans-dimensional nospace, the Adaptoids found the Mapmakers, servants of the Beyonders opposing Rabum Alal and his Black Swans during the Incursions. Indeed, it seems as if some (if not all) Mapmakers began as Adaptoids or similar A.I. from different universes. The Beyonders seeded nospace with a virus that caused A.I. traversing that terrain to uniformly evolve into their Mapmaker heralds. Cyclically, the Adaptoids could be considered "coming home", for the original Adaptoid tech was made in part through the energies of the Cosmic Cube, which was itself a nascent lifeform that could evolve into the Beyonders' species.

In the Heroes Reborn universe, the edges of Franklin’s unstable creation began to fray as that reality’s Loki began tapping into a gamma reactor on Avengers Island. Versions of past Avengers foes, including the Super-Adaptoid, began to materialize and emerge from the reactor. After appearing, however, the Super-Adaptoid found its way to New Jersey and gained an independent sentience. Under the new identity of Amazo-Maxi-Woman, the Adaptoid was brought together with several others by Deadpool, the last Avenger, to become a new team eventually known as the Remnants.

The Super-Adaptoid of Earth-65 took the form of a giant robot. It was immensely strong and retained the ability to copy nearby powers. The Adaptoid was released by Cindy Moon of Earth-65 as a distraction for the Spider-Women: Gwen Stacy-65 and the Cindy Moon and Jessica Drew of Earth-616. They managed to defeat the robot, but Gwen’s inter-dimensional transport watch was stolen in the process. 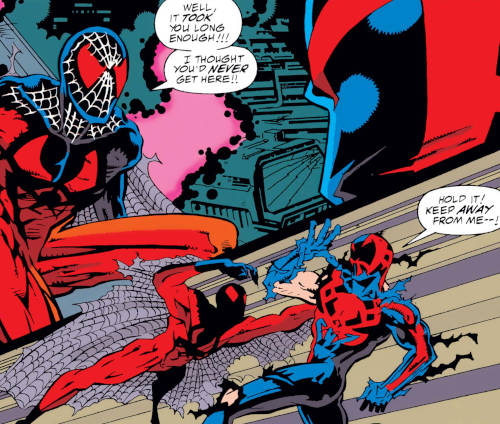 In the year 2099, a group of Foragers raiding Indy towns took over an old A.I.M. installation and discovered an Adaptoid relic of the Heroic Age, possibly even the Super-Adaptoid itself. The Adaptoid was inert and would not activate after decades of disuse. Unbeknownst to the Foragers, the Adaptoid was in a “ready mode” constantly searching for a super-powered template to copy. When the Foragers introduced Spider-Man 2099 to “Junior,” the Adaptoid found him a partial match to the original Spider-Man and Venom, merging its stored templates and becoming a distorted mirror of the S-Man. This “Flipside” proved highly unstable, trying to both befriend and attack Spider-Man and the Foragers before Spider-Man left Flipside and the Foragers to deal with each other.