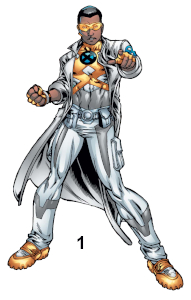 1) With the New Mutants, Prodigy wore a mostly white costume with gray highlights on the pants and a gold pattern like a crossing ‘X’ on his chest. A blue ‘X’ insignia rested on top of this pattern. David also wore golden boots and fingerless gloves, a utility belt and a trench coat over his sleeveless shirt. His golden goggles contained a Head’s-Up Display which projected information onto his field of vision.  [New X-Men: Academy X #2]

2) When David lost his powers but continued working with the training squad, he took some extra precautions. He adopted a bulletproof chest armor after reading in the archives about the shooting death of previous student, Douglas Ramsey. His basic urban military wear was supplemented by his still-operating HUD goggles. [New X-Men (2nd series) #29]

3) In the final days of the training squad, Prodigy and the New X-Men adopted team uniforms based on the traditional yellow-and black X-Men design. David went through several versions of his HUD goggles, varying from the two red lenses to a single yellow visor. [New X-Men (2nd series) #43] 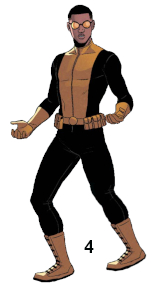 4) When he became a Young Avenger, Prodigy essentially wore his X-Uniform, just stripped of all ‘X’ identified markers. It was a basic black bodysuit with a yellow stripe down the front, as well as yellow boots, gloves, and belt. He also wore a less pronounced version of his goggles. [Young Avengers (2nd series) #7]

5) Prodigy’s costume for X-Factor Investigators was a gold jacket with lapel button and white pants. He wore dark gloves and boots with a carrying pouch strapped over his chest, stitched with the X-Factor symbol. [X-Factor (4th series) #2]