About five hundred years ago, on Earth-712, Zarda was born on Utopia Isle, an isolated community in the Southern Sea. Thousands of years previously, the Kree experimented on the Utopians' genetics, creating a race of superhumans with advanced longevity. While the rest of humanity was crafting flint spearheads, the Utopians developed a culture based on peace, fellowship and learning, free of crime, poverty and injustice; a true Utopia.

In the early years of World War II, Zarda adopted the position of Utopia’s emissary to mankind. 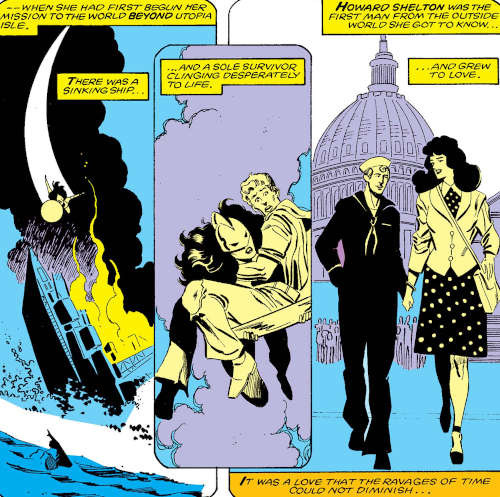 While travelling to commence her mission, she discovered a sinking American naval ship and rescued its sole survivor, Seaman Howard Shelton. Howard was the first person Zarda had met outside of Utopia and he helped introduce her to the outside world. It wasn’t long before the pair fell in love, and it was a love that would last the next fifty years or more. Also, during this time, Zarda joined the Golden Agency, a wartime group of superheroes, and aided the Allies in their war efforts. 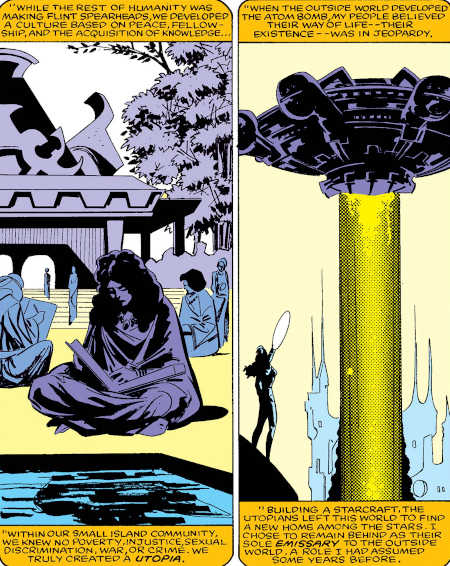 A few years later, when mankind developed atomic weapons, the Utopians believed their way of life was at threat. They constructed a space craft and left the Earth to explore the stars, though Zarda remained behind on Earth. [Squadron Supreme (1st series) #1]

Later, Zarda joined a new team of superhumans, the Squadron Supreme, who quickly became the world’s premier team of heroes. For unknown reasons, Zarda was not present when the Squadron had their first interdimensional adventure in which they clashed with the Avengers on Earth-616. Later, when the Serpent Cartel seized control of the Squadron (and much of the United States), Zarda managed to avoid falling under their power due to year of training in mental resistance. Fortunately, the Avengers were soon drawn to the Squadron’s world and helped remove the powerful Serpent Crown from the Cartel, freeing the Squadron form their power. Whilst that was taking place, Power Princess and Nighthawk rescued their teammate Arcanna from the Cartel’s clutches. [Avengers (1st series) #85-86, #147-149, Atlantis Attacks crossover]

Many months later, much of the world’s government had fallen under the sway of President Kyle Richmond and his alien ally, the Overmind. As a former Squadron member, Zarda and her 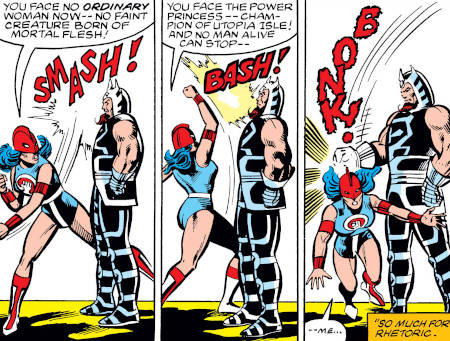 teammates approached Richmond to demand answers. Zarda attacked the Overmind, but her assault was all but useless against the entity. She and the rest of the Squadron, with the exception of Hyperion, fell under the mental sway of the Overmind. Fortunately, Hyperion was able to summon aid from Earth-616 from the Defenders, who helped defeat the Overmind and destroy the evil entity that was the true mastermind, Null the Living Darkness. [Defenders (1st series) #112-114]

In the aftermath of the Overmind’s takeover of the world, the Earth was in shambles. To the world, it looked as if the United States, with the Squadron Supreme as their enforcers, had conquered the planet. With the Overmind’s control gone, the world started rioting and rising up against their governments. Zarda proposed the Squadron work to create a utopia, akin to her own homeland, though this would require the team to take control of the world. Only Kyle Richmond, the Nighthawk, refused to go along with her plan, and quit the team. As a gesture of good faith, each remaining member of the team agreed to reveal their identity to the world the next day when they revealed they would be taking command of the planet. Zarda spent one last night comforted in the arms of her now elderly husband Howard, knowing everything would change the next day. [Squadron Supreme (1st series) #1]

Power Princess played a key role in building the Squadron’s utopia, working closely with the U.S. president, and becoming the spokesperson for disarmament. She took her mission very seriously, so when her teammate Doctor Spectrum tried to prank her by causing her costume to fall open

while filming an advertisement, she took the immature act in stride. While she could have returned the favor and torn Spectrum’s pants off, she rose above, though she assured him he would regret is irresponsibility. She later got her “revenge” when she nominated Doctor Spectrum for a search for missing teammate Nuke, when he wanted some downtime. When Spectrum accidentally killed Nuke, who had gone insane, Zarda put petty squabbles aside to comfort her friend. [Squadron Supreme (1st series) #3]

Zarda and the rest of the Squadron continued to work towards implementing their utopia by disarming the United States. It was during these efforts that she proved the truth in her name Power Princess, by effortlessly taking down a rogue branch of the U.S. military, and a tank, with little effort. Later, the Squadron discussed the ethics of the next stage of their plan, using behavior modification to remove the criminal inclinations from the minds of criminals. While some of her teammates were opposed to the idea, Zarda was fully supportive of the proposal and believed it to be the most human approach to defeating crime. [Squadron Supreme (1st series) #4]

The Squadron’s decision to reveal their identities to the world came back to haunt them when the team’s enemies, the Institute of Evil, kidnapped their loved ones, including the invalid Howard. Fortunately, Zarda and her teammates were able to rescue their loved ones and defeat the Institute soon after. Once again showing her commitment to the cause, Power Princess not only agreed to using the B-Mod technology on the Institute of Evil, but also voted to induct the reformed criminals into the Squadron as well. [Squadron Supreme (1st series) #5-6]

Unbeknownst to the Squadron, their enemy Master Menace had replaced Hyperion with an evil version from the Squadron Sinister of Earth #616. As this evil doppelganger feigned amnesia after an explosion, Zarda stepped up as acting leader while “Hyperion” recovered. She also spent a 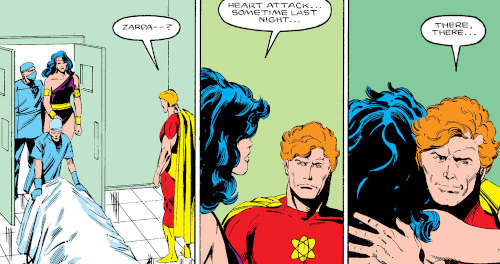 significant amount of time with Hyperion, believing she was helping him recover his memories. The Sinister Hyperion quickly became infatuated with Power Princess and he saw her as is physical equal. He removed Zarda’s elderly husbanded as an obstacle by secretly sucking the air out of his lungs until his heart stopped, then re-inflating his lungs after death, feigning a heart attack.

The Hyperion imposter supported Zarda during this troubling time and, within a week, she gave in to her attraction to the man. While still devoted to her husband, she and Howard’s relationship had become largely platonic in recent years. She and the man she thought was Hyperion were quickly smitten with each other and formed a relationship. However, the true Hyperion eventually escaped from the otherworldly void in which Master Menace had trapped him and confronted his imposter. Zarda was stunned to learn the man she was growing to love was not in fact who she thought he was. Ultimately, the true Hyperion won the fight and killed his doppelganger with an atomic vision blast. As the imposter lay dying in Zarda’s arms, he confessed to murdering Howard, and apologized but he would have done anything to wind her love. [Squadron Supreme (1st series) #7-8]

During his battle with his imposter, Hyperion’s retinas were damaged, so Power Princess retained her position as acting team leader while he recovered. Zarda was a storm of emotions following learning the truth about Howard’s death and the man she thought was Hyperion. She realized, however, that the reason she fell in love with the fake Hyperion so quickly was because deep down she had always loved the Hyperion. Not one to dilly dally, Zarda shared her feelings with Hyperion and kissed him. It seemed that kiss was all Hyperion needed to realize he did indeed love Zarda as well and they started a relationship. [Squadron Supreme (1st series) #9-11]

Twelve months after implementing their Utopia Program, the Squadron held to their promise that they would hand control of the government back, having achieved all of their goals. Immensely proud of what she and her team had done, Zarda was shocked when she discovered former Squadron member Nighthawk had mounted a resistance to the program, known as the

Redeemers. When Nighthawk’s Redeemers fought the Squadron, they did so furiously, with casualties on both sides. Ultimately, before he died, Nighthawk made Power Princess and Hyperion realize their Utopia was held together with thread. The programs they had implemented were for the cause of good only because good people were leading it. Realizing the flaw in their program, Zarda and the surviving Squadron members resolved to dismantle the program. [Squadron Supreme (1st series) #12]