Before Robert Frank, Jr. was born, his parents were known as the Whizzer and Miss America. Costumed heroes from the 1940's and 50's, they served as members of the Invaders, the Liberty 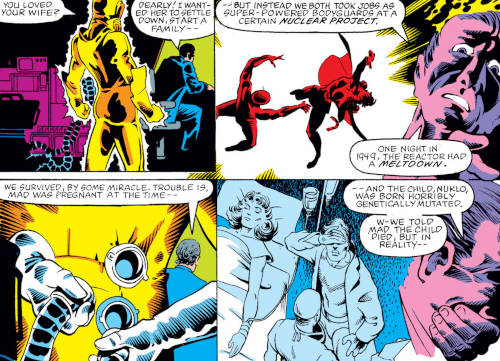 Legion, the All-Winners Squad and eventually the V-Battalion. During a security assignment at a nuclear research site, the Franks were exposed to intense radiation while shutting down an atomic inferno triggered in the reactor. This greatly affected the pregnant Madeline Joyce-Frank, and the baby she carried within. When Robert Frank Jr. was born, he was already demonstrating signs of radioactivity. His unstable radioactive physiology would only grow more powerful with time, threatening all life around him.

The Whizzer was counseled by government contacts to seal his son away. A specialized chrono-module was designed to contain the baby, keeping him alive but dormant for decades. It was hoped that the child's radiation was eventually drop enough for him to be stabilized and live a normal life, but it was a slim hope. Robert Frank, Sr. made the choice for his wife, having the hospital tell her their baby was stillborn. The chrono-module was buried beneath a government building in New York for safekeeping and the Franks went on with their lives. Tragically, Madeline became pregnant again and the child she conceived truly was stillborn this time. She died while giving birth on Mount Wundagore, and the Whizzer was left alone in the world without any family. [Giant-Size Avengers #1, Vision and the Scarlet Witch (1st series) #2]

Decades went by, and the secret hidden beneath that certain government building would be lost to the passage of time. In modern times, the old building collapsed and the Avengers discovered the chrono-module while rescuing victims from the wreckage. The Whizzer returned from his seclusion to reclaim the module, but he was unable to explain himself to the Avengers before the

module erupted from within. Robert Frank Jr. emerged with the radioactively-charged body of an adult, but a mind still developmentally that of an infant. The Avengers struck first, prompting the enfant terrible to instinctively strike back. Seeking to escape, the radioactive mutant blasted his way out of Avengers Mansion and stalked the streets of Manhattan.

Robert Frank Jr. felt the need to feed and subconsciously separated into three bodies to seek out sources of energy to empower him further. The Avengers separated as well in order to track his bodies down. When the Vision encountered Bob at an electrical plant and referred to him as a "nuclear nemesis," Bob's child-like mind repeated "Nu-klo" and the name stuck. The Avengers corralled the three forms of Nuklo back together, but the radioactive mutant merged and became more powerful than before, thanks to the energies the Nuklos had accumulated first. In the end, 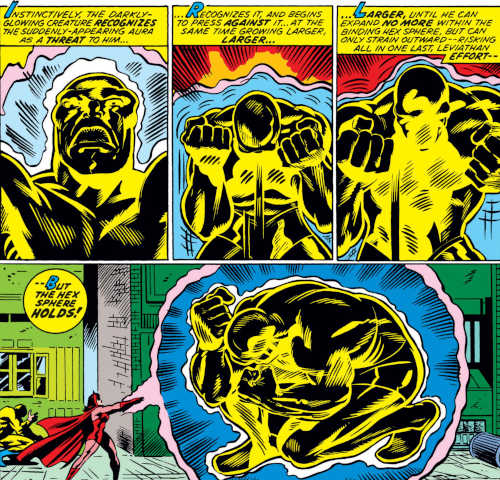 the colossal Nuklo was halted by the Scarlet Witch. She had heard the Whizzer's tale and reached the assumption that she and her brother Pietro (born on Wundagore the same night) were the Franks' missing twins. Therefore, it was almost poetic when the newfound sister brought down her elder brother, using a hex bolt to rob Nuklo of his radioactive energy, leaving him inert for the time being. [Giant-Size Avengers #1]

For reasons of national security, Nuklo's care was overseen by the U.S. Army. General Jacob Pollock had personal ambitions, however, and went renegade from the Army with his unit and Nuklo's support shell. He made an alliance with the Living Laser, a super-villain who claimed even greater might thanks to the Serpent Crown. They made plans to seize power, but their efforts were discovered by the Avengers after the Whizzer learned of his son's plight and sought assistance. Nuklo was released during the Avengers' battle with the treasonous soldiers, and went on a rampage over being contained once more. Neither the Avengers nor Pollock could control Nuklo 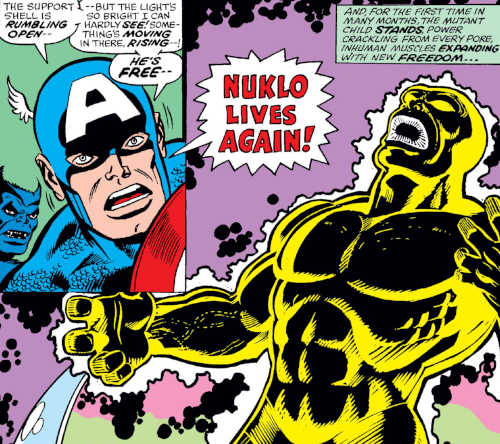 in his tantrum as he began to grow in both size and nuclear power. Iron Man tried to mechanically reproduce Wanda's hex on Nuklo by reversing his polarity, but he only drew Nuklo's attention as the radioactive mutant grabbed the Armored Avenger and started draining his power. Nuklo was approaching a volatile critical mass when the Whizzer arrived late and struck down his son, ending his threat once more. [Avengers Annual #6]

Nuklo's care was transferred to more beneficent guardians after that. He was delivered for study to Project PEGASUS (Potential Energy Group / Alternative Sources, United States), a facility with a dedicated wing for the research value of energy-producing super-beings. However, care was also given towards Nuklo's mental state in an effort to educate and socialize him. His appointed 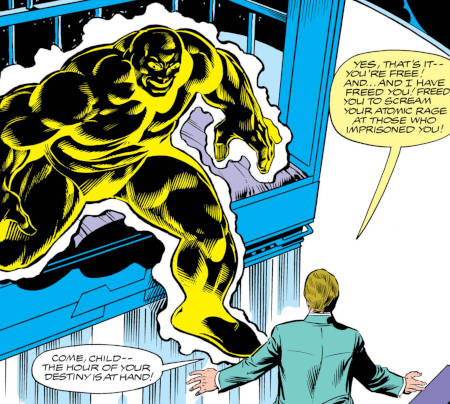 guardian, Henri Sorel, saw to Nuklo's behavioral therapy. Still, Nuklo was a potential threat to be harnessed by unscrupulous parties. Thomas Lightner of Nth Command had infiltrated PEGASUS on behalf of RoXXon, and he released Nuklo from his radiation-absorbing crib as a distraction for his sabotage. The playful and bewildered Nuklo was a threat to the project as his radiation aura threatened to overheat the compound's reactors merely by his presence. It took the combined effort of security agents Thing and Giant-Man to get Nuklo back under control. [Marvel Two-In-One #54-55]