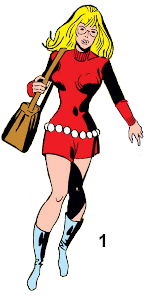 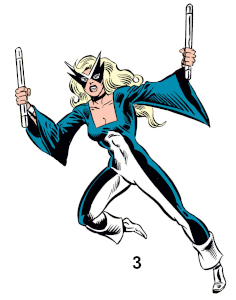 1) As S.H.I.E.L.D. Agent 19, Bobbi wore a red mini-dress with long sleeves and a loose white belt. She also wore white boots and glasses in the field before later switching to contacts. [Astonishing Tales (1st series) #15]

2) As the Huntress, Barbara Morse wore a black form-fitting jumpsuit with a plunging V cut that exposed her chest from shoulders to belt line. She wore a black domino mask, collar, boots, and a thick utility belt. [Marvel Super-Action #1]

3) When she became Mockingbird, Bobbi adopted a new costume with a square cut instead of a V. The primary color of the suit varied from black, blue-black, to gray depending on the artist. The secondary color came from a white oval shape which extended from her stomach down the inside of her legs, ending with her white boots. Her domino mask added a white upper trim (resembling a bird's nose) and later she made the mask much larger, with two points extending above her hairline and two secondary points beneath those. Her sleeves were wide and billowy to accommodate easy deployment of her battle staves, held to her forearms by two metal braces. [Marvel Team-Up (1st series) #95] 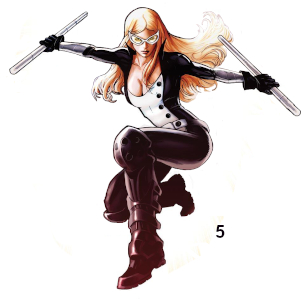 4) After moving to sunny California, Mockingbird modified her costume to better suit the climate. While keeping the sleeves, her costume now resembled a one-piece bathing suit from below, exposing her legs except for a pair of black boots. Her exposed throat area was now a curved space instead of squared, and the white portion of the bodysuit extended all the way from the top to the bottom of the outfit. Later versions of the costume also had the white stripe down her backside as well. [West Coast Avengers (2nd series) #12]

5) After returning from her Skrull abduction, Mockingbird adopted a costume which partially resembled her older designs. Made of blue-black material, it had a central white stripe from her chest down to her inner thighs. A series of blue-black buttons clasped it together down the left side. She wore dark boots and gloves, with metal bands on her forearms to hold her battle staves. Bobbi wore white goggles with arched tips to evoke her old mask, and colored lenses with various visual modes. She occasionally wore a trench coat with the billowy sleeves like her old costumes, and a white stripe down the back. [New Avengers: The Reunion #1] 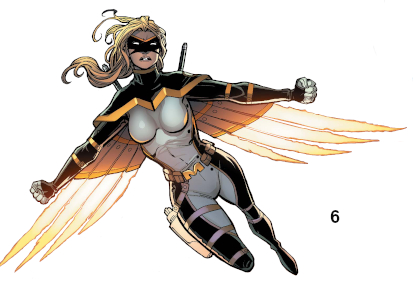 6) As a S.H.I.E.L.D. field operative and Parker Industries liaison, Mockingbird assumed a modified costume. The main costume was a black bodysuit from the neck down, with a white central piece somewhat resembling an 'M.' She wore a belt with an 'M' buckle, pouches, and straps on her sleeves and thighs, as well as a hip holster. Small outer sleeves had a S.H.I.E.L.D. Eagle insignia on the shoulders and concealed Parker Industries tech with retractable energy wings, allowing her to fly. Several variations of this costume existed, including a version with gold trim, straight black and white, or the more traditional S.H.I.E.L.D. blue and white. [All-New, All-Different Marvel Point One #1]